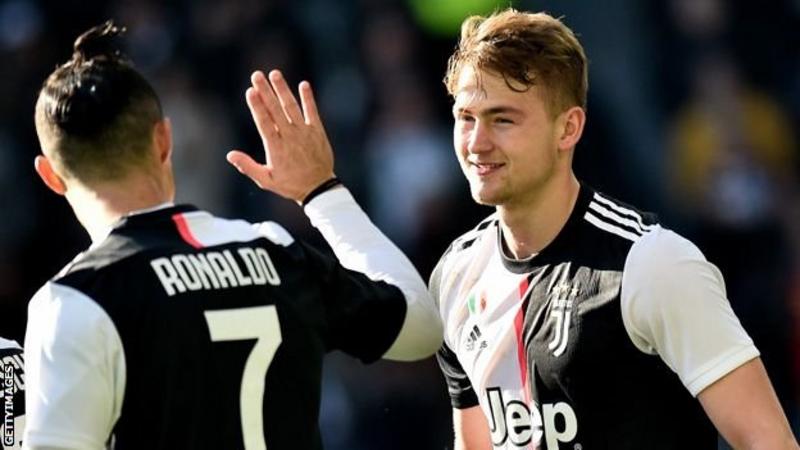 “When I came into the dressing room the first time I was a little bit like a child in a candy shop… ‘There’s Buffon… there’s Ronaldo.'”

It seems as though Matthijs de Ligt reacted in the same way most of us would on arrival at Juventus – the difference being he had just become one of their team-mates.

Here’s what else we learned when the 20-year-old Netherlands defender sat down with Juve goalkeeper Wojciech Szczesny in an interview broadcast on Polish YouTube channel Foot Truck.

How to pronounce his name

He struggled with handballs but has now settled

De Ligt joined Juventus from Ajax for £67.5m in July 2019 – and was keen to point out he no longer sees the Italian champions like a sweet shop.

“In the beginning you’re looking like, ‘Who’s that? Who’s that?’ After two months I felt like I could be more myself.”

By that point, he had ridden out a tricky start to his Juve career – scoring an own goal in a pre-season friendly against title rivals Inter Milan.

“There were already a lot of eyes on me,” he said. “Then there’s even more pressure, but I knew in training I felt good.

“In games there was still a bit of adaptation. Step by step I improved.”

On conceding penalties for handball against Lecce and Torino early in his Juve career, he added: “I remember going to the showers and people were saying it was unbelievable.

“It’s like there was a magnet in my arm.”

That he was ‘honoured’ Ronaldo spoke to him

Before De Ligt joined Juve he was also linked with Manchester United, Barcelona and Paris St-Germain.

And there was speculation Cristiano Ronaldo had convinced him to move to Turin with whispered words after the Netherlands played Portugal in June 2019.

“That’s not the reason,” said De Ligt. “I had a lot of time to choose between the clubs that I could join and when I put everything on paper, Juventus was the best choice.”

He does, though, admit it was an “honour” that Ronaldo spoke to him.

That he had freedom on the ball at Ajax

“A trainer is as good as his team, but I think he has a really big role in the success,” he said of Ten Hag.

And looking at the tactical approaches in the two countries, he said: “I think it’s more predicted here.

Szczesny said that was similar to life under Arsene Wenger, whose Arsenal side he played for from 2006-2015.

“We played some good football, but we never prepared it,” he said. “You’d improvise, just play and enjoy the football.”

How he wants to learn from two of the best

In Netherlands team-mate Virgil van Dijk and Juve’s Giorgio Chiellini, De Ligt plays alongside two of the finest central defenders in the game.

He said: “You try to pick some attributes from them to improve your own game, but in the end I think the most important thing is to observe them but not change your own style of play.

“I think every player has their own style, so I just try to see things I can improve on.”