King-of-bright John Olsen reveals his dark and melancholy side

Only a few weeks ago the Olsen family featured in dual episodes of ABC’s Australian Story, clearing some skeletons out of the closet. The main storyline concerned Tim Olsen’s battles with drink and drugs, and his efforts to get his life back on track. There was no disguising that Tim’s problems began with his relationship with his famous father. It’s not easy standing in the shadow of such a renowned artist and gargantuan personality as John Olsen.

In his usual devil-may-care fashion, John told us: “An artist is selfish. He’ll do anything to preserve his work and eliminate anyone who stands in his way. I didn’t really mean to hurt people either, but my act is only [self] preservation. You do what you have to do and that is sometimes beyond the sense of ordinary morality.” 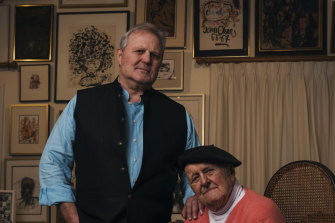 Anyone who knows Olsen can testify that he has never had much time for ordinary morality. If he’s gotten away with it that’s largely because of his charm and infectious joie de vivre. Nobody ever contends that great artists must be moral exemplars. Compared to Picasso or Rembrandt, Olsen is a pussycat.

Yet even Picasso and Rembrandt had their dark sides, those intimations of mortality and moments of self-recrimination that appear when old men look into the mirror. Think of Picasso’s Self-portrait facing death of 1972, in which his staring face resembles a death’s head, or the sadness in Rembrandt’s Self-portrait at the age of 63 from 1669, the year of his death.

Olsen at 93 is still thought of as a painter of bright, hedonistic images. His You Beaut Country pictures of the 1960s made us look at the Australian landscape with fresh eyes, while his paintings of Sydney and its surrounds positively seethe with vitality. But when Olsen paints a self-portrait the energy drains away, leaving the emotional equivalent of a black hole. The price of the artist’s selfishness, his ferocious sense of self-preservation, is existential loneliness. The true artist needs and craves solitude but there are times when the studio feels as forbidding as a prison cell.

The price of the artist’s selfishness, his ferocious sense of self-preservation, is an existential loneliness.

The public Olsen is a great performer but occasionally, alone in the studio at night, a different persona emerges. John Olsen: Goya’s Dog is an exhibition originally conceived by the late Bill Wright, and followed through by National Art School director Steven Alderton.

The idea, as explained in a letter that Wright wrote to Olsen, was to look at the artist’s “introspective” paintings. The chief stimulus seems to have been Donde voy? Self-portraits in moments of doubt, which Olsen entered in the 1989 Archibald Prize, only to lose out to Bryan Westwood’s bland Portrait of Elwyn Lynn. For Wright, Olsen’s picture “was clearly the outstanding and only major work of art in the entire selection”. 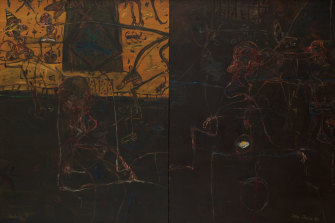 This is a slight exaggeration but looking at that year’s finalists it’s an injustice that Olsen didn’t win, as Donde voy? is a work of far greater depth and ambition than anything else. It’s a stand-out in this survey as well: a late-night horror movie of a painting in which the aged artist, his face hardly more than a skull decorated with a few threads of raw meat, confronts his doppelganger in the dark. The one bright detail is a fried egg that shines like a lightbulb – a reference to Velazquez’s famous picture, An old woman cooking eggs, 1618, a demonstration of youthful virtuosity, painted at the age of 18 or 19.

Needless to say, in Donde voy? the egg has a very different connotation, serving as a wistful, ironic memento of lost youth. It’s a theme that recurs again and again in this show as we find Olsen brooding on his fading powers, coping with bouts of depression or lack of inspiration. He often includes a reference to some great artist or poet, as if to emphasise the universality of such problems. An obvious example is The circus animals’ desertion, 1994, which takes its cue from WB Yeats’s poem that charts long and futile efforts to pin down a “theme”. In the midst of clutter, both his own and the poet’s, Olsen paints himself as a red-faced gremlin emerging from a teacup.

In these unflattering self-images, we see the other side of Olsen’s egotism. It might be described as a predilection for melancholy, at worst, feelings of regret and self-loathing. Where this exhibition is truly impressive is the way these dark “introspective” works gain in force by being set alongside a selection of vibrant, celebratory pictures such as Golden Summer, Clarendon, 1983, Where the bee sucks, there suck I, 1984-86, and – a real coup – an exuberant, two-panel ceiling painting, Le soleil, 1964, deinstalled from a private collection and reinstalled at the NAS Gallery. 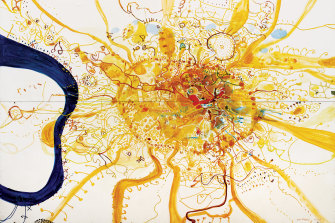 Olsen’s Le Soleil, 1965, was removed from the ceiling of a private home to be seen in public for the first time. Credit:John Olsen

It required a huge commitment of time and resources to secure works such as Le soilel and the two-metre-long, deep blue painting, The bay and tidal pool, 1977, done as a private commission and never previously exhibited. It’s this depth of commitment that distinguishes this survey from so many museum shows that tend to cut corners – to the detriment of the subject. Alderton and his team have drawn on numerous private collections, gathering early works and, among other highlights, two fabulous bath paintings. 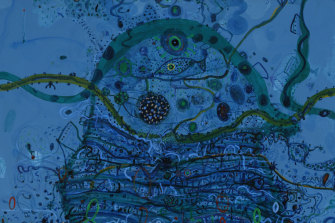 The Bay and Tidal Pool, 1979 by John Olsen.Credit:Courtesy Sophie Olver and Christie Johnston

As the title suggests, John Olsen: Goya’s Dog explores the artist’s debt to Spain, and to Spanish artists from Velazquez and Goya to Tapies, Saura and Miro. From his first visit in 1956, Olsen felt a pronounced attraction for Spain, seeing it as the “shadowy” counterpart to “sunny” Australia. He has returned repeatedly to Spanish themes throughout his career, from the time of Spanish encounter, 1960, the breakthrough triptych that helped forge his reputation.

Spanish art and literature are replete with images of absurdity and death, reflecting the country’s long-term poverty, its subjection to the Catholic Church, and authoritarian rule. It’s the antithesis of those bucolic pictures of gum trees and sheep pastures that dominated Australian art in the 20th century. It’s eons away from the explosive joy in the natural world one finds in Olsen’s You Beaut Country pictures.

At times Olsen has been completely seduced by the Australian landscape, on other occasions compelled to contemplate the human condition. That second preoccupation has been largely pessimistic, saturated with Spanish references. He has portrayed himself as Don Quixote, the honourable but demented knight who tilted at windmills. He has identified with Goya, who played the courtier at the court of Carlos IV, but devoted much of his private work to scenes of madness, violence and despair. 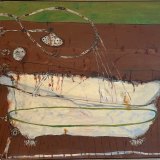 The Bath, 1996 by John Olsen.Credit:Courtesy James and Jacqui Erskine

To speak of Goya’s dog is to instantly conjure up a painting of a dog’s head sticking up from a brown, sloping mass beneath an empty, pale ochre sky. One of the artist’s “black paintings” rescued from the wall of his house, the Quinta del Sordo (House of the deaf man), it’s an image of isolation and helplessness. If the dog is drowning, as is widely believed, there will be no one to come to its rescue. It symbolises the isolation of Goya’s deafness and his feelings of helplessness as his life is engulfed by a tidal wave of war and civil unrest.

Olsen engages obliquely with this work in three stark, minimal paintings completed this year, Reflections on Goya’s dog I, II & III. They feature the artist and a pet dachshund – a breed more comical than noble. Man and beast resemble dirty wisps of smoke against a backdrop of black and brown. The lightbulb that dangles from the ceiling in two of these panels might be taken from Picasso’s Guernica, or perhaps from one of Philip Guston’s studio paintings. If a lightbulb stereotypically signifies an idea, it is but dimly conceived. In this gloomy setting, the dog also suggests the “black dog” of depression that plagued Dr Johnson and Winston Churchill. 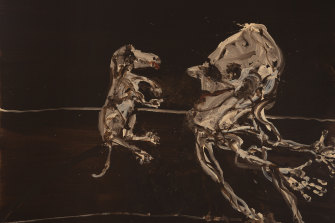 The depressive feels there is literally nothing to see or do, nothing that is meaningful. Goya’s Dog, with its fearsome depiction of the void – an anticipation of abstract art – captures that feeling with a startling intensity. Yet there’s also a paradoxical grandeur in this painting, a commitment to truth that many have seen as inherently beautiful. Olsen has striven for that same brutal honesty but he knows it’s absurd to compare his own comfortable existence with Goya’s life and times. His dog is playful, not threatening. The weak bulb keeps the void at bay. There’s nothing for an old painter to do but keep working in the studio for as long as a glimmer of light remains.

THE BOOKLIST
The Booklist is a weekly newsletter for book lovers from books editor Jason Steger. Get it delivered every Friday.