‘You all have to CALM DOWN’: Jurgen Klopp demands end to criticism of European Super League plot – but his own fans continue to protest against club’s owners FSG ahead of today’s game at Anfield… and Gary Lineker slams him as ‘spectacularly tone deaf’

Gary Lineker has described Liverpool manager Jurgen Klopp as ‘spectacularly tone deaf’ after the German called on TV pundits to ‘calm down’ in their criticism following the European Super League’s dramatic collapse.

The bombshell announcement of a breakaway league last weekend sent shockwaves around the world as fans, managers and players of the ‘Big Six’ clubs and below vented their anger at greedy owners who tried to push through the plans.

Klopp reiterated before Monday night’s draw with Leeds that he was not in favour of a Super League, having made similar comments in 2019, but went on to repeat his concern that he and his players were being tarred with the same brush as Liverpool’s owners Fenway Sports Group. 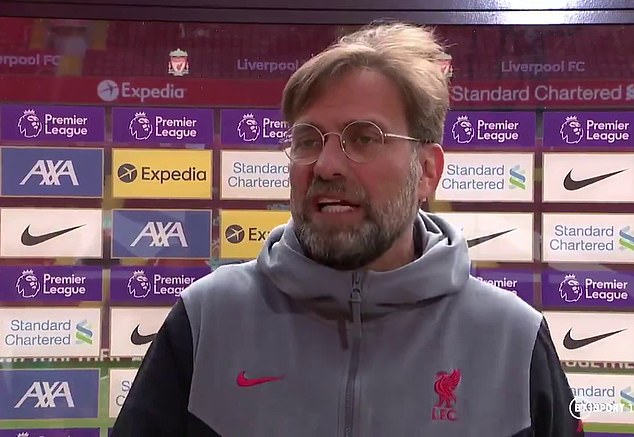 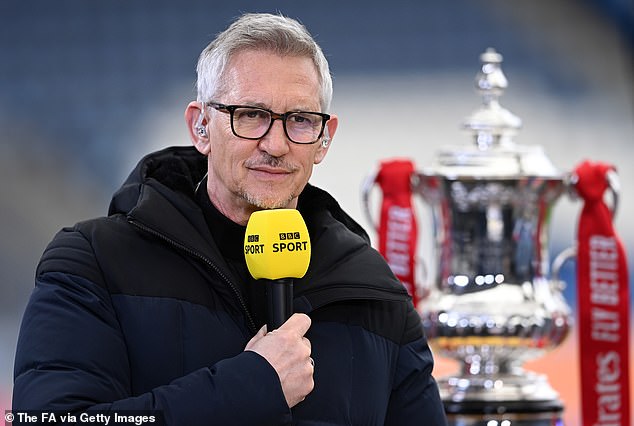 ‘The thing was, yes, our owners made a mistake. We said it often enough, they know it,’ Klopp told BT Sport before his side’s 1-1 Premier League draw with Newcastle.

‘What I didn’t like in that moment… the Leeds supporters are a good example. They are not better than others or worse than others, but they went on us.

‘We are just the face of the club. We didn’t even know about it. It’s important we don’t forget that.

‘I’ve seen the pictures over the last few days, last night Arsenal and Chelsea as well. I really think you all have to calm down.

‘There are three journalists all the time, talking all day about it. It’s winding up people. We are still in a pandemic. 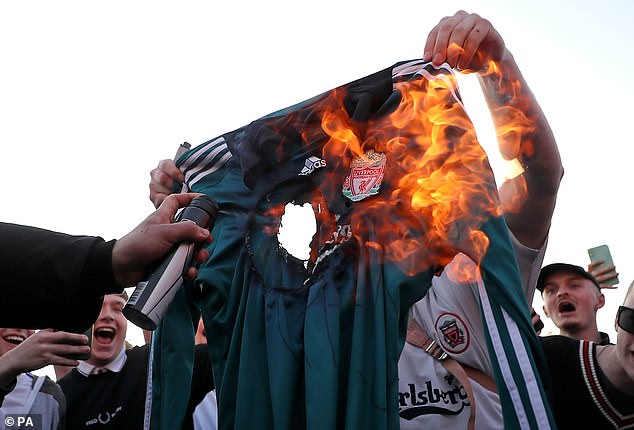 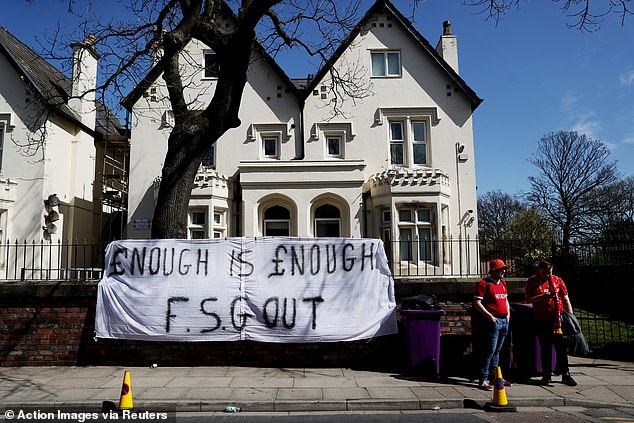 ‘People are out there without face masks shouting their opinions. Pundits have to calm down.

‘Yes, we didn’t want it, but let’s deal with it. The people, they learned their lessons, 100 per cent.

‘So just relax a little bit, we have to carry on. That’s always what we have to do.’

However, Match of the Day host and BBC presenter Lineker felt that Klopp had badly misjudged his pre-match comments on the media.

‘A handful of owners try to tear our game apart and may well try to do so again, and we’re just told to ”calm down and move on”,’ the Match of the Day presenter tweeted. 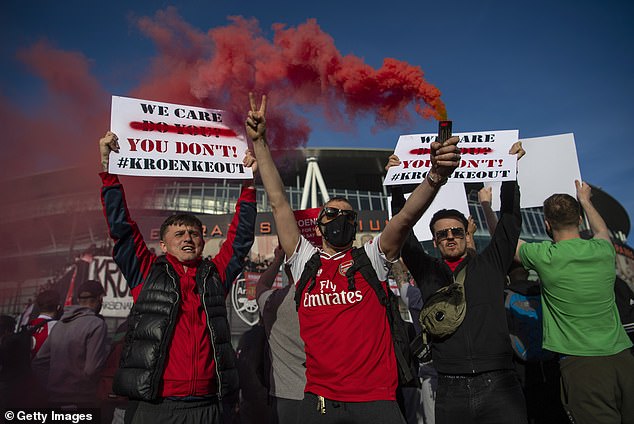 ‘Huge admirer of Klopp but he’s spectacularly tone deaf here. Without the fans of our beautiful game it would be much uglier today.’

Liverpool fans continued their protests outside Anfield before Saturday’s lunchtime kick off with Newcastle – which finished as a 1-1 draw – and called for the club’s owners to go.

The club’s principal owner John W. Henry issued a grovelling apology to Liverpool fans following the Reds’ withdrawal from the league on Tuesday, but that has not quelled the fury on Merseyside, with around 150 people turning up on Anfield Road to share their disquiet. 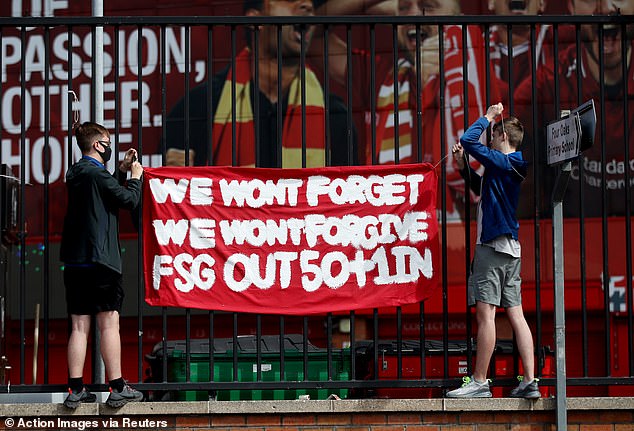 Banners saying ‘£nough is £nough, FSG out’ and ‘Our game, our club: thanks but no Yanks’ were unfurled, although the scenes were far less dramatic than those seen witnessed at Arsenal the day before as fans clapped the team bus into the ground.

It is Liverpool’s first home game since it was revealed they were among six Premier League clubs, along with Manchester City, Manchester United, Chelsea, Tottenham and Arsenal, who wanted to join the ESL.

They later withdrew following a huge outcry and Klopp stated in his programme notes that he was wrong to hit out at fans who threatened to remove their flags from The Kop – a move blocked when Liverpool performed their U-turn. 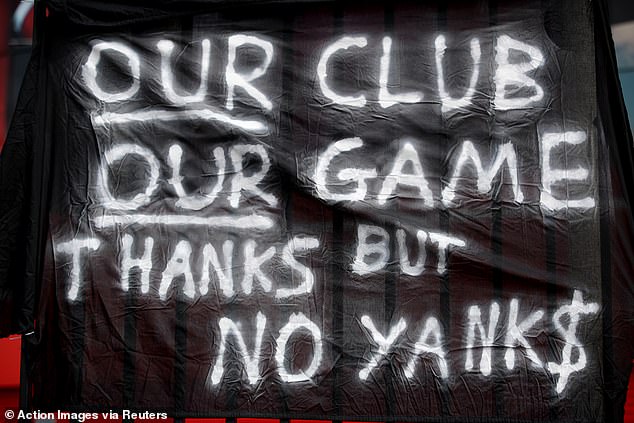 ‘I am not free from blame for letting emotion get the better of me,’ he said.

‘When I found that the flags were being removed in protest, it hurt me and I reacted in a way I wish I hadn’t.

‘It was right to take apart the concept and it was fair to criticise it, along with those who came up with it and also how it was presented. All legitimate in my view. The anger and disappointment was justified.’ 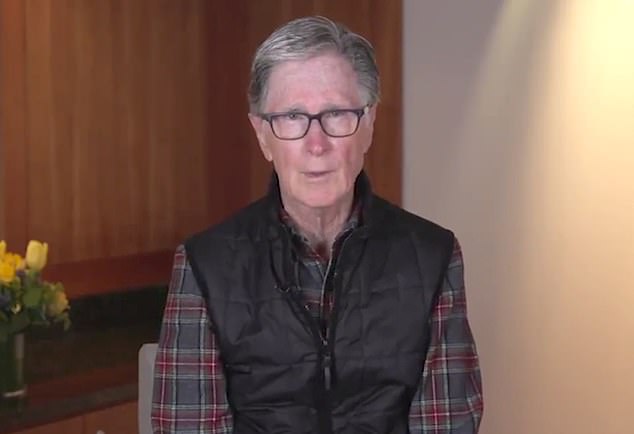 Liverpool’s principal owner John W. Henry was forced to make a grovelling apology to the fans

In the same column, he insisted that the club’s reputation should suffer for the actions of its owners.

‘The part I have struggled with is seeing this club, a place I love and am now proud to call home, trashed. And done so in a manner which suggests no redemption is possible,’ he added.

Steve McManaman, who is covering the match for BT, said the flak directed at Liverpool is tough to take for the supporters 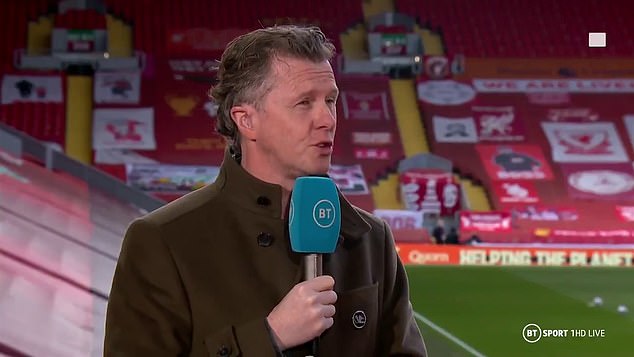 ‘It’s been a city full of anger, full of resentment. They want to support the team. They understand the resentment and anger is directed at one person,’ he said.

‘There’s still a lot of resentment towards everything that’s gone on. It’s shameful. We’ve had enough people throw stones at this great club and this great city in the past.

‘It’s another rod to hit us with. It brings you down, doesn’t it? You’re forever fighting to save your reputation.’

Fellow pundit and another ex-Red Peter Crouch rubbished the Super League concept and slammed the owners of the Big Six for their secrecy.

‘It was absolutely scandalous what these people have done in a dark corner. They haven’t consulted any supporter groups. 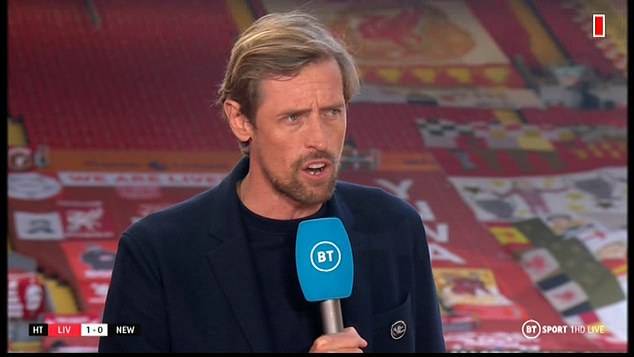 They can’t have picked up the phone and said to Kenny Dalglish, ”what do you think about this idea?”

‘We have tribalism in this country. Six teams in this country (who initially signed up to the league), three of them haven’t won the European Cup, how are they deciding they should be in some sort of group together?’

Klopp’s side now sit sixth having played a game more than West Ham and Chelsea, who face each other in the 5.30 kick-off. Seventh-placed Spurs don’t play in the Premier League this weekend as they are competing in the Carabao Cup Final against Man City.