Mr Morrison says while he is “not wedded to anything”, the party organisation must do something different from what has happened in the past to get more women into Parliament. 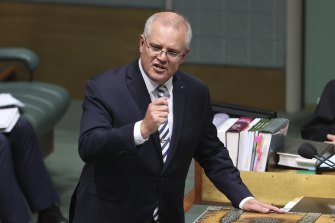 Prime Minister Scott Morrison says the Liberal and National Party organisations need to do more to get more women into Parliament.Credit:Alex Ellinghausen

“There are reservations people express about those affirmative action-type targets, I think they’re quite genuine points.

“But at the end of the day, if we’re not getting more women in this parliament, then we’ve got to be doing something different than we’re doing now.”

The party has long been resistant to adopting quotas to ensure women are elected. Labor introduced the measure in the mid-1990s and has now reached 48 per cent female representation in the federal caucus.

Those within the party structures say there is a change happening now and over the past few years, pointing to the numbers of new female MPs entering parliaments.

At both the 2019 federal and NSW elections, half the first-time Coalition lower house members were women. A senior Liberal source, who would only speak on the condition of remaining anonymous, said this was no accident, while another Liberal said they expected everything short of quotas would and should be done.

In Queensland, the party chose female candidates for half of the “target non-incumbent seats” in last October’s poll, and a LNP spokesman said it was “working hard to encourage many of these candidates to stay involved and continue to seek election”.

A spokesman for the federal party said the Liberals were committed to increasing the number of women in Parliament.

The NSW branch and its Women’s Council run support, training and mentoring for women wanting to run for office. At a federal level, there is the Enid Lyons Fighting Fund established by then-minister for women Kelly O’Dwyer in 2018, which backed 17 female candidates at the last election.

“The NSW Liberal Party supports the Prime Minister’s and our Premier’s commitment to increasing the number of Liberal women in our parliaments, and has been making progress in our representation but we recognise that more needs to be done,” a party spokesman said.

Mr Morrison said on Tuesday his party had tried “the other way” – without quotas – and hadn’t got the results it needed. After he spoke out, a number of his federal colleagues, including ministers Marise Payne, Karen Andrews, Sussan Ley, Melissa Price and Greg Hunt have also said it’s worth considering.

Ms Berejiklian said it was clear simply having targets had failed to increase the numbers of women, but the conversation “doesn’t begin and end with quotas”. Former Victorian Premier Ted Baillieu also urged the party to introduce quotas while the state’s current Liberal opposition leader Michael O’Brien was open to them and “anything which will achieve the outcome” of getting more women elected.