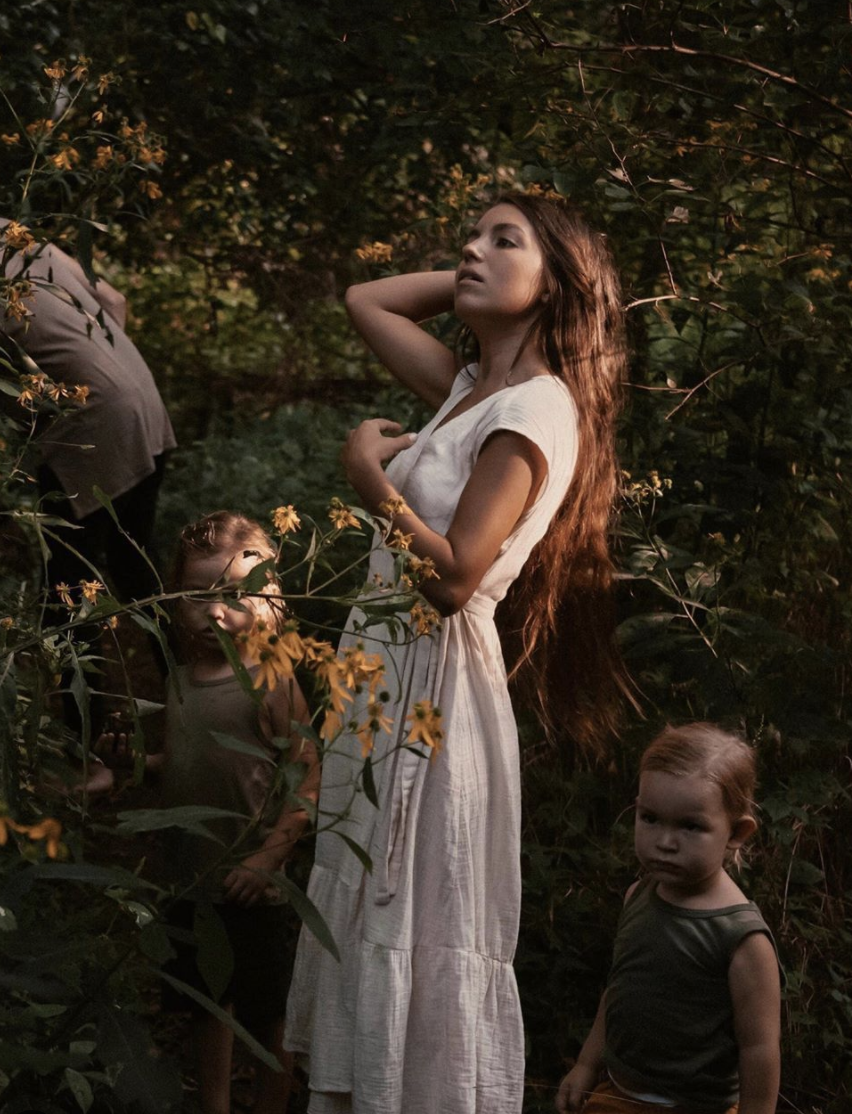 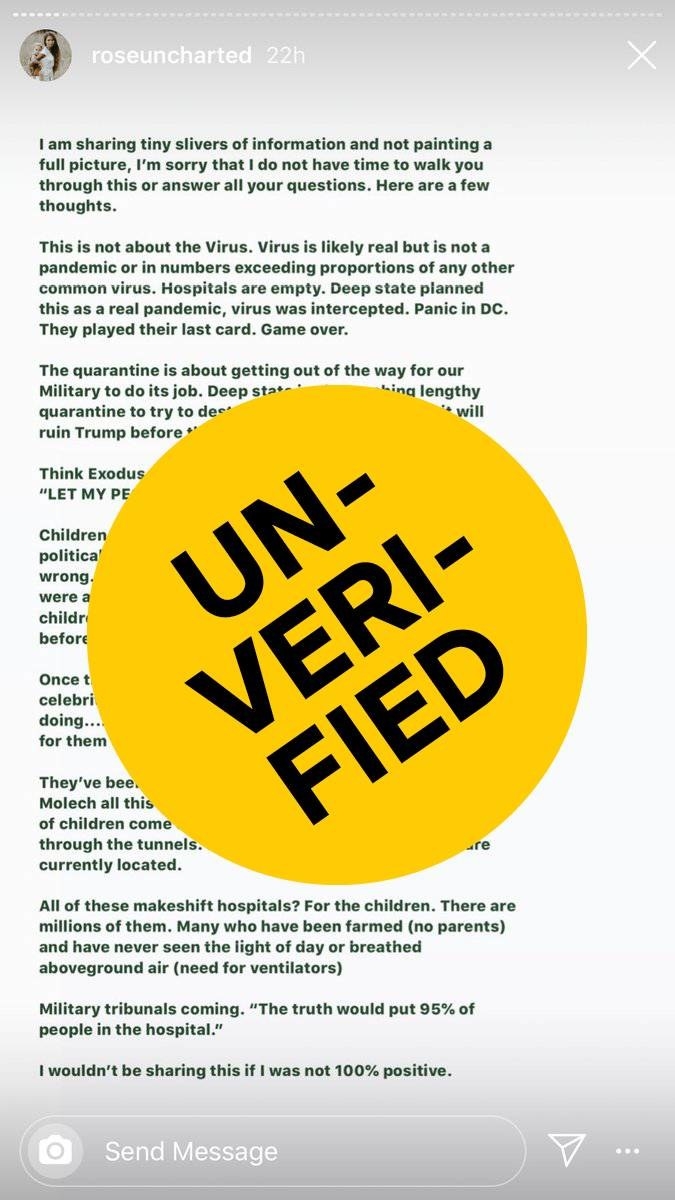 As if things aren’t bad enough right now, some lifestyle and parenting bloggers are now spreading completely baseless conspiracy theories about the coronavirus pandemic to their tens of thousands of followers on Instagram.

The influencers are seamlessly weaving in evidence-free far-right conspiracy theories that are usually found in the significantly less Instagrammable parts of the internet, such as 4 and 8-chan, in between their usual idyllic family snaps.

It’s unclear if these influencers believe some of the theories spouted by QAnon supporters, or where exactly they are getting their information. But they are sharing some of the unfounded conspiracies, or some people who are posting about them, on their feeds.

None of the people mentioned in this article responded when asked if they believe QAnon conspiracy theories.

It is jarring, to say the least. Take @roseuncharted, or Rose Henges, a Christian mom blogger and YouTuber who advocates for “holistic living” to her 73,000 followers. She’s also an anti-vaxxer, but is mainstream enough to be followed by many prominent Christian influencers like Audrey Roloff and Korie Robertson from Duck Dynasty.

Over the past week, Henges has been posting bogus QAnon conspiracy theories amid her normal filtered grams of her family, her holistic medicine business, and nature. 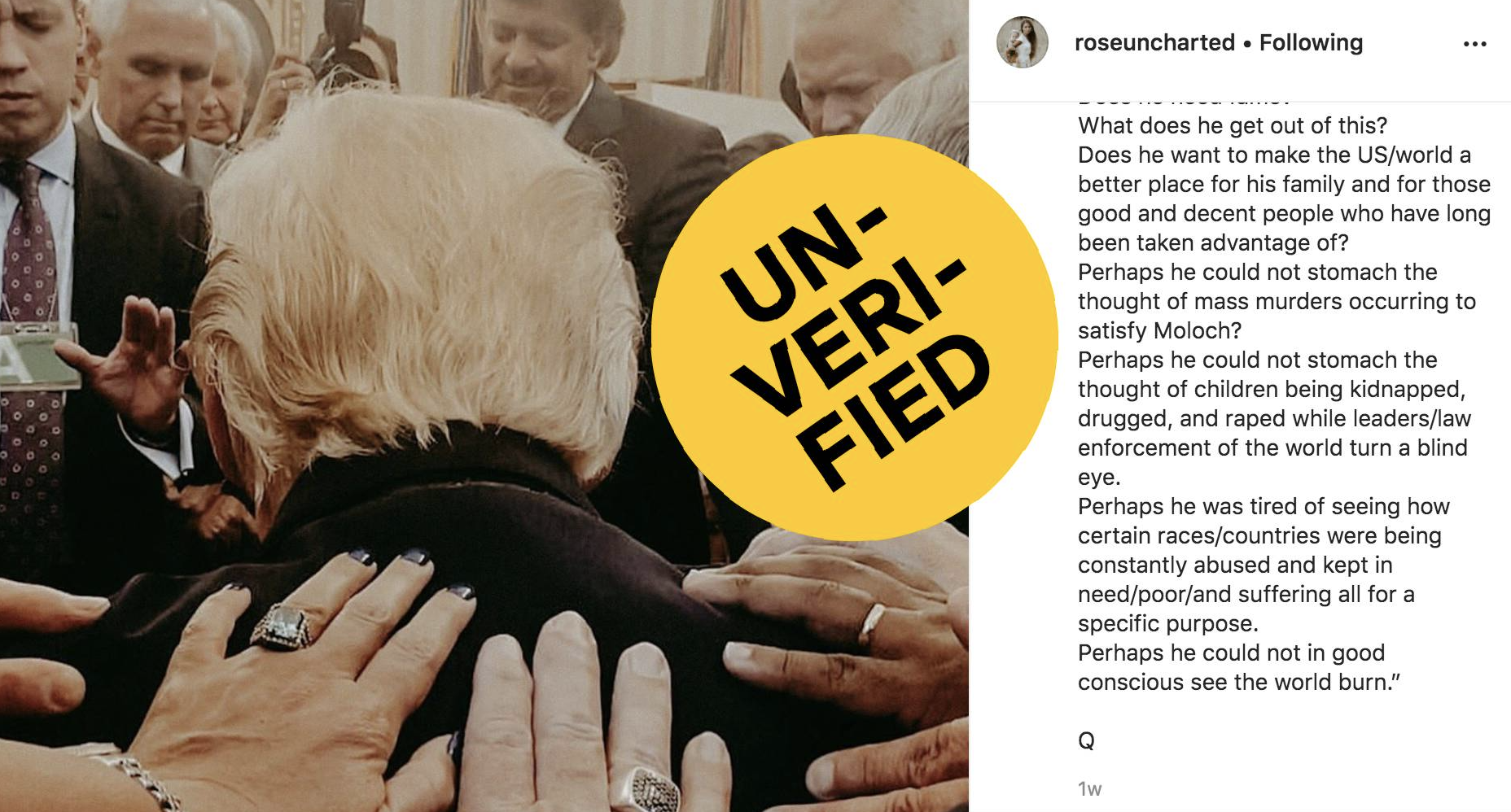 First, a TL;DR. Supporters of the completely unfounded QAnon conspiracy theory believe that President Donald Trump and the American military are waging a secret war against the Deep State, which they believe is a global cabal of pedophiles. They get their updates from off-shoots of the anonymous message board 8chan and a website called QAlerts, which they comb through for barely-coherent secret messages from a person they believe has Q-level security clearance within the US government.

If you are still confused about QAnon, my colleagues made this super informative video last year breaking down how fake it all is:

The QAnon movement has seen increased activity on platforms like Facebook, Instagram, and Twitter since the outbreak of COVID-19. Some Q followers baselessly claim the virus is a man-made bioweapon, which they believe was created by either the Chinese government or Bill Gates, depending on which Twitter account you read. And some followers believe that the virus is a Deep State plot and doesn’t exist at all, even though it has killed thousands upon thousands around the world.

In the last two weeks, as the American death toll has continued to rise and the ramifications of how bad things are getting is beginning to sink in, many Q followers, realizing their earlier beliefs don’t comport with the truth, have suddenly decided that COVID-19 is real, but that much of the emergency response we’re seeing is actually cover for Trump’s military operations against the deep state (which is not what is happening).

Recently, QAnon supporters have been fixated on the US Navy Hospital Ship Mercy since it docked in New York City. Influencers in the movement found messages on QAlerts they believe allude to the ship. Conspiracy theories also abound about the makeshift hospital being built in Central Park.

Part of the evidence-free QAnon conspiracy theory is the baseless claim that thousands of children are secretly being held captive by the rich and powerful, trafficked in tunnels under major cities. According to those in the movement, the Mercy hospital ship is being used to covertly rescue those children from sexual slavery, and they are being treated at the Central Park hospital.

While these theories obviously originated on the internet and have been circulating there for years, seeing them pop up in the feeds of previously mostly innocuous parenting and lifestyle bloggers is a strange new development. 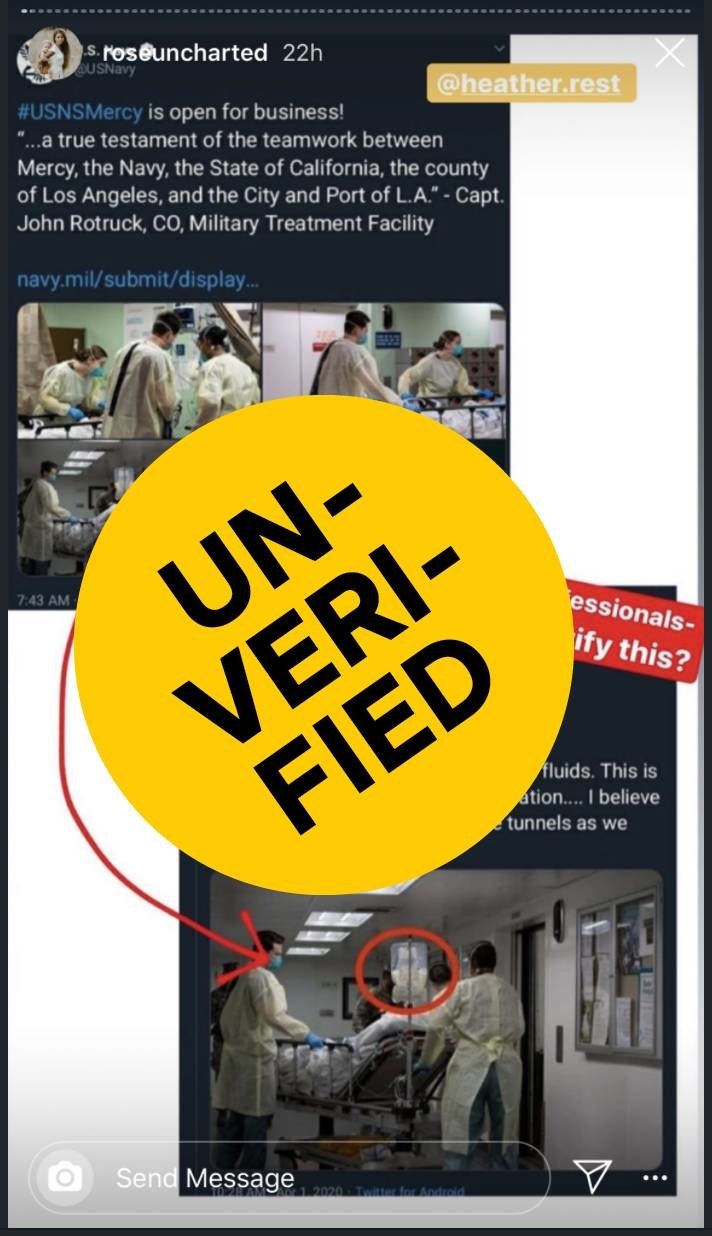 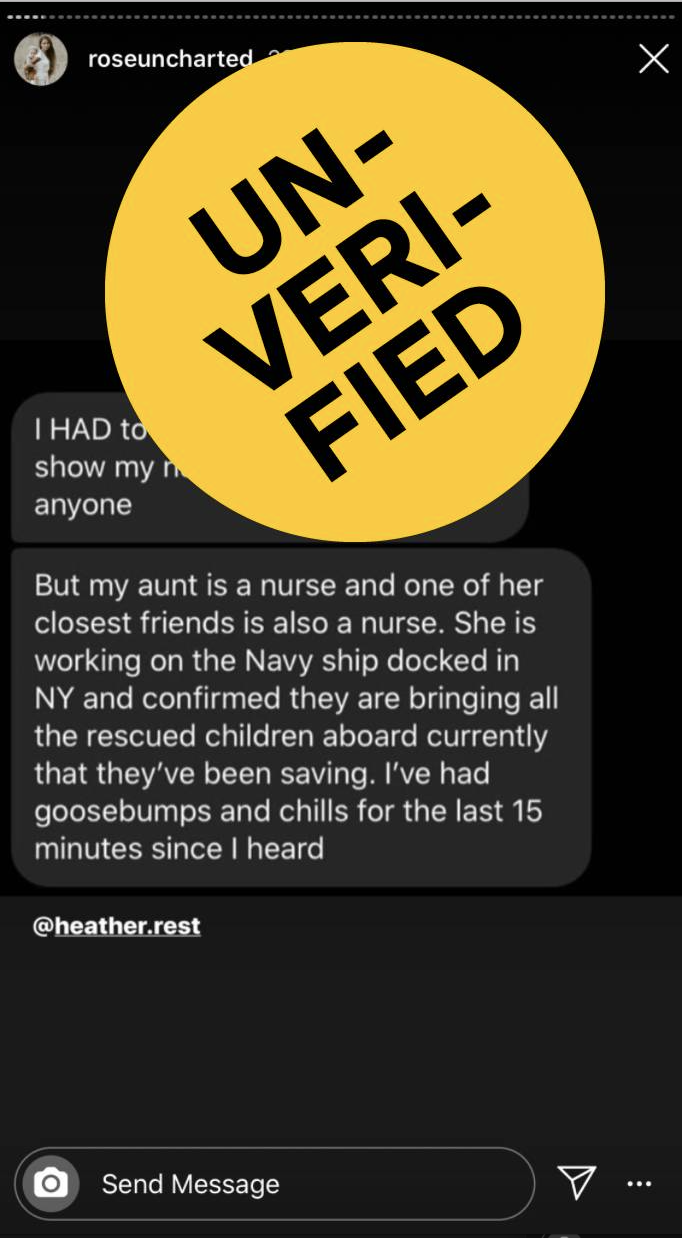 Ivy Carnegie, who describes herself on her page as: “Jesus • wife’n•mom’n💍 to my high school sweet heart,” has about 87,000 followers, and mostly posts lifestyle, wellness, and parenting content.

On Thursday, Carnegie posted unfounded claims on her Instagram story from a conspiracy theorist John Mappin about the coronavirus. Mappin, a British hotelier, has been promoting the hoax that Mercy could be connected to QAnon. In January, Mappin raised a QAnon flag over his castle. 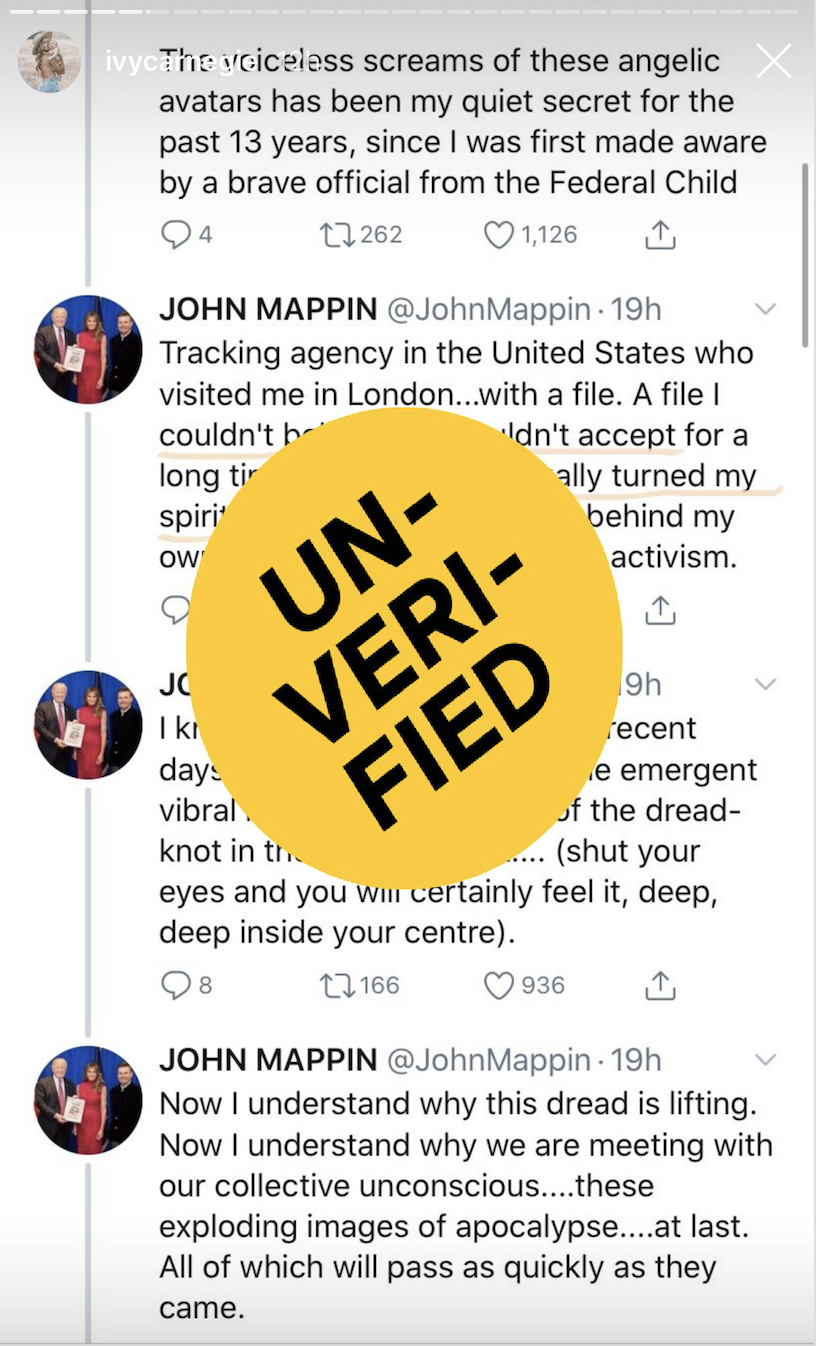 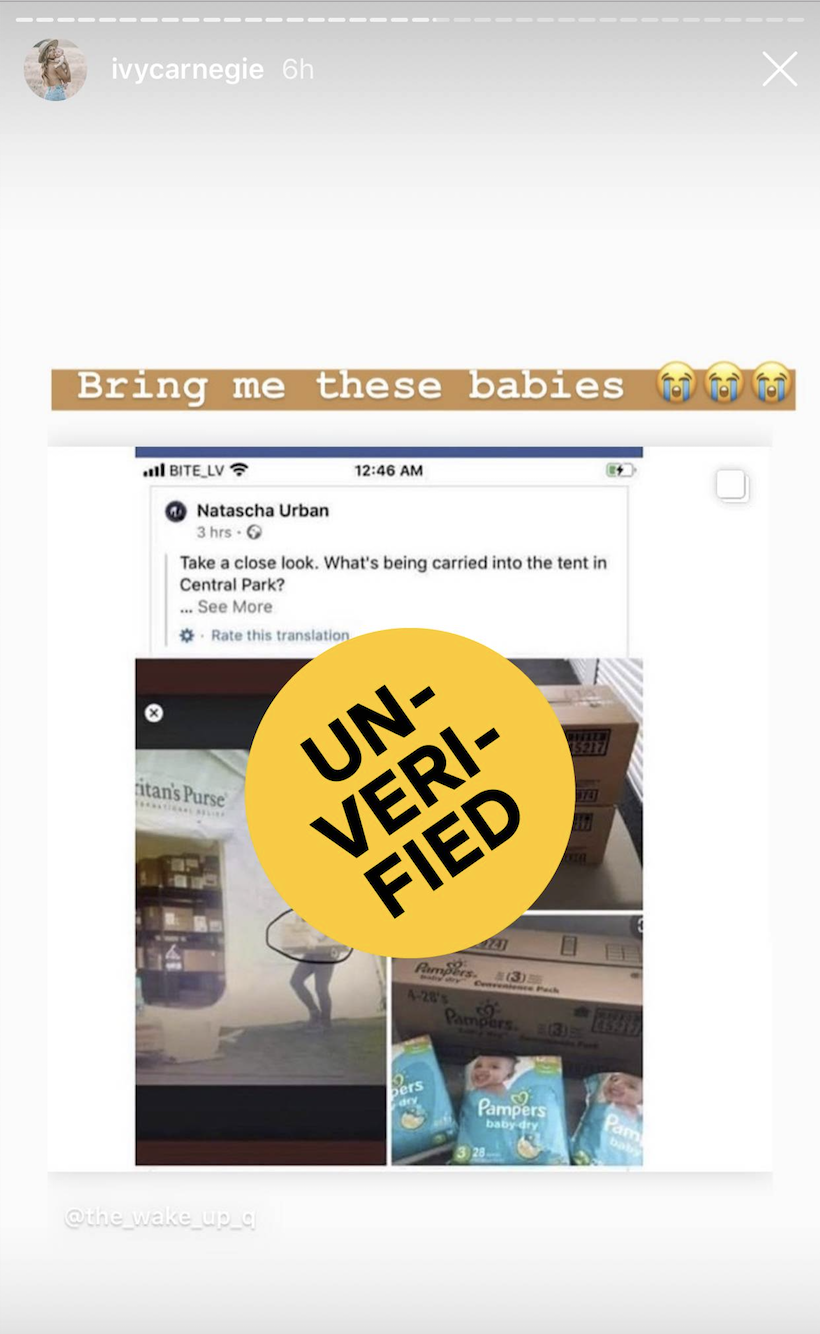 In an Instagram story amid all this on Thursday, Carnegie claimed, in a video she filtered with “retro cam” as her toddler played in the background, that in the past year she has started to understand human trafficking is a problem.

Carnegie told BuzzFeed News she decided to speak out publicly because “human trafficking is an issue close to my heart, and has been for a long time.”

“Coronavirus set aside, there’s a lot of things happening with human trafficking right now. It’s an exciting time for those that have been praying for things to change,” she said.

Carnegie added that her followers have been incredibly supportive of her posts.

“Many mamas already knew about it, some didn’t. But it’s been nothing but positive,” she said. “Protecting children is something everyone can get behind, and it’s important.”

Carnegie didn’t respond when asked if she knew about QAnon conspiracy theories. 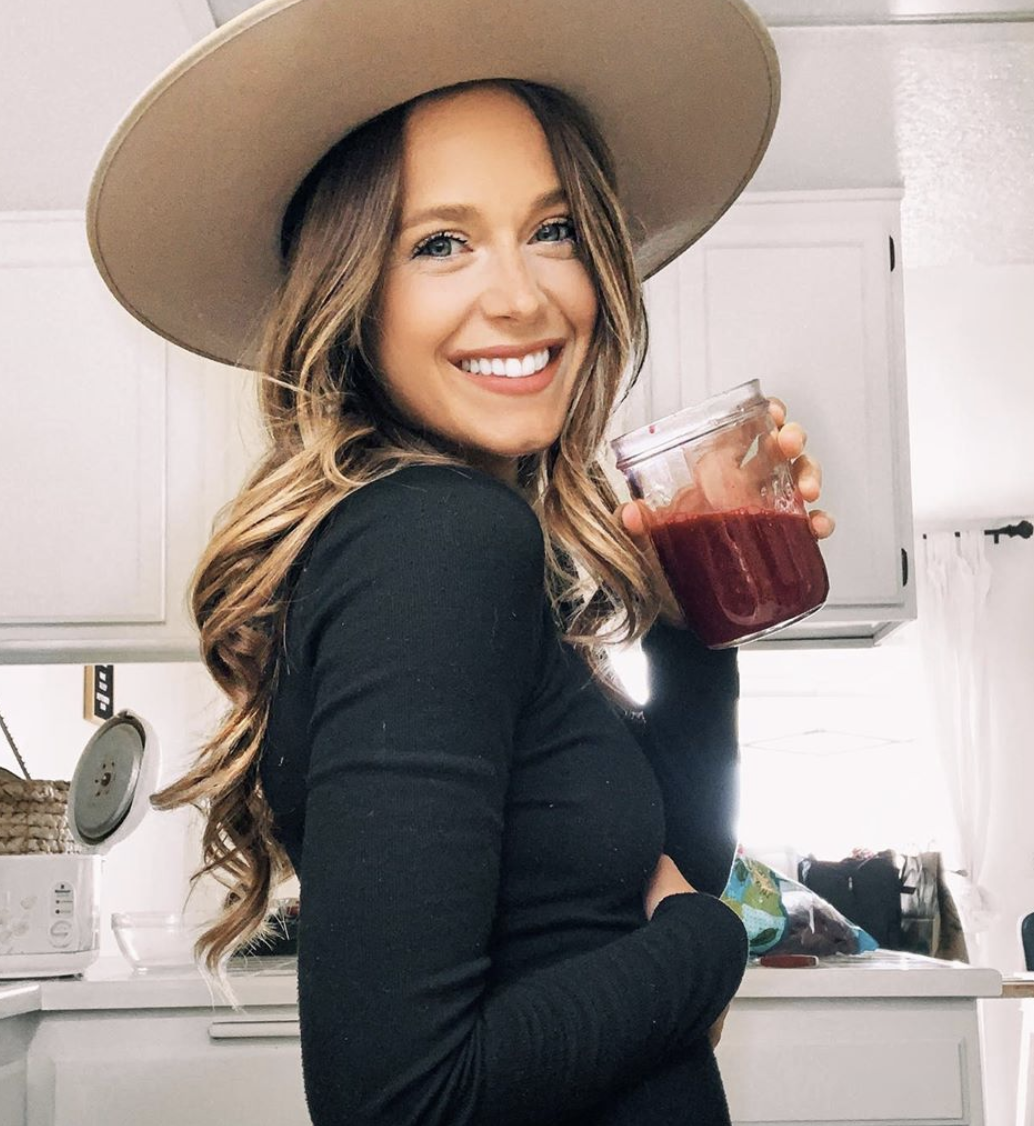 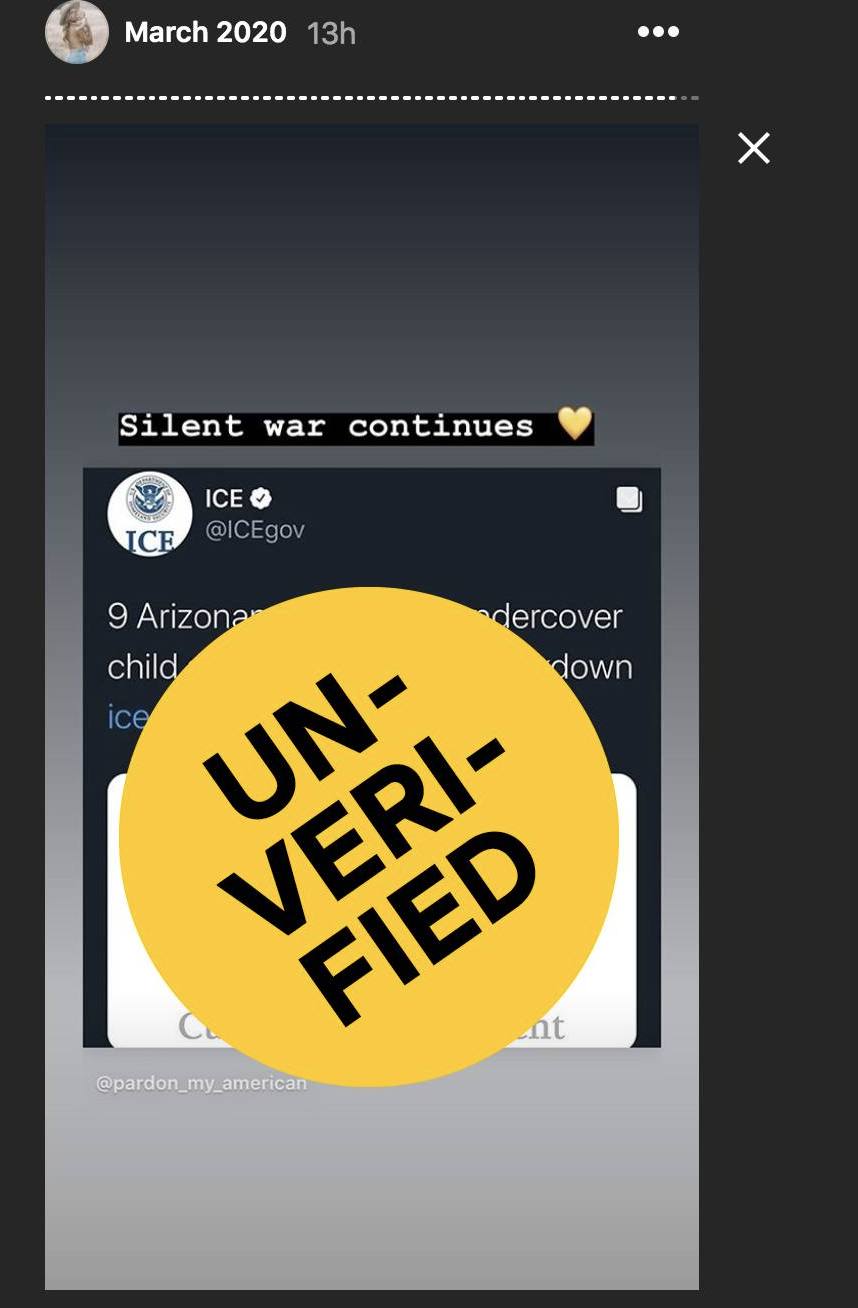 Jalynn Schroeder, a beauty and fashion influencer, told her followers in an Instagram video that she had an awakening and used a hashtag popular with QAnon followers.

Schroeder now has five different conspiracy theory Instagram story “highlights” on her profile, along with highlights like “my food” and “meditation.” 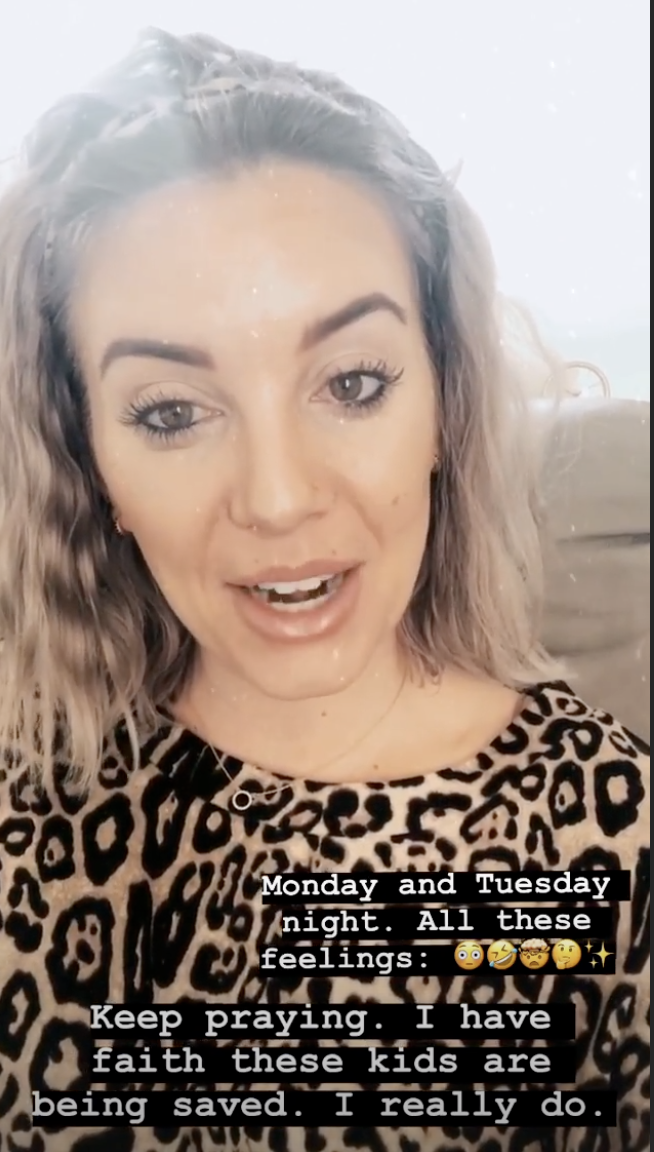 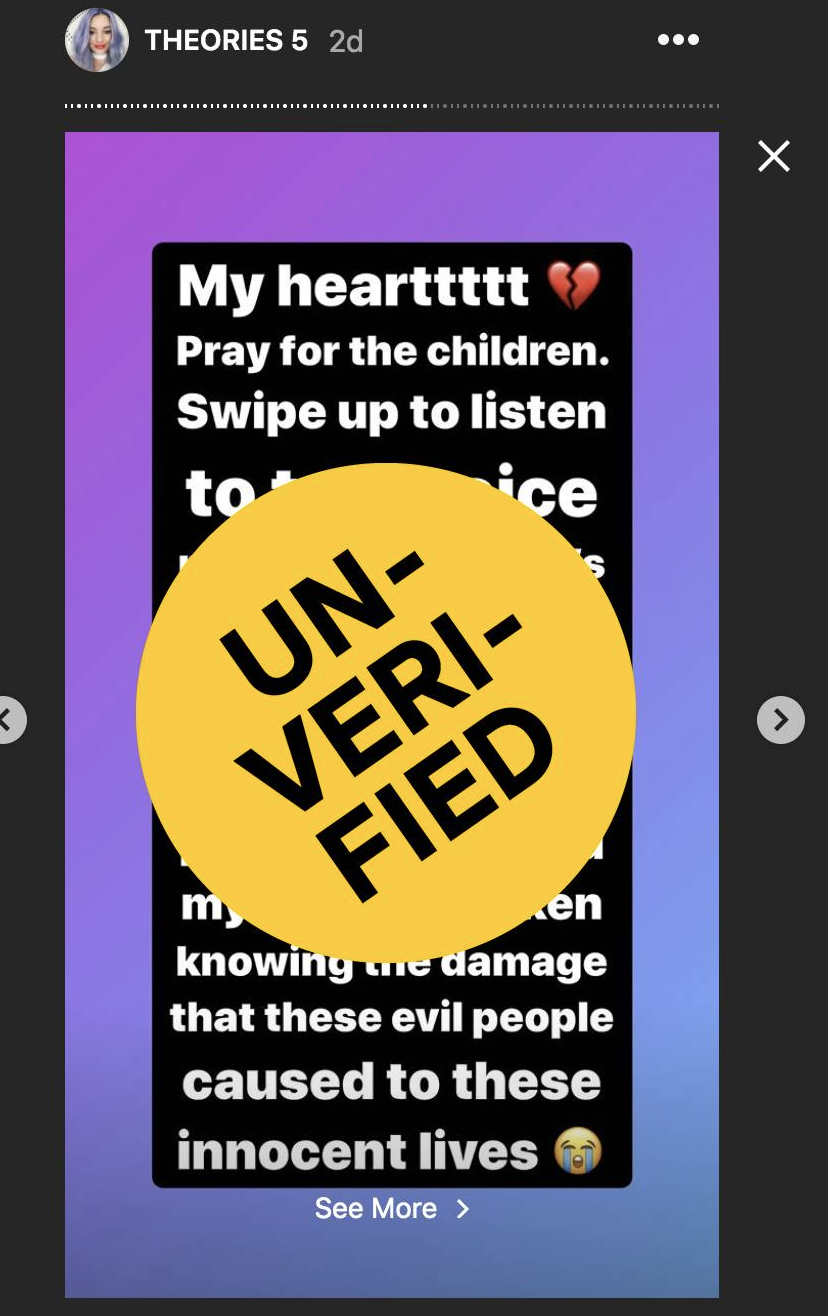 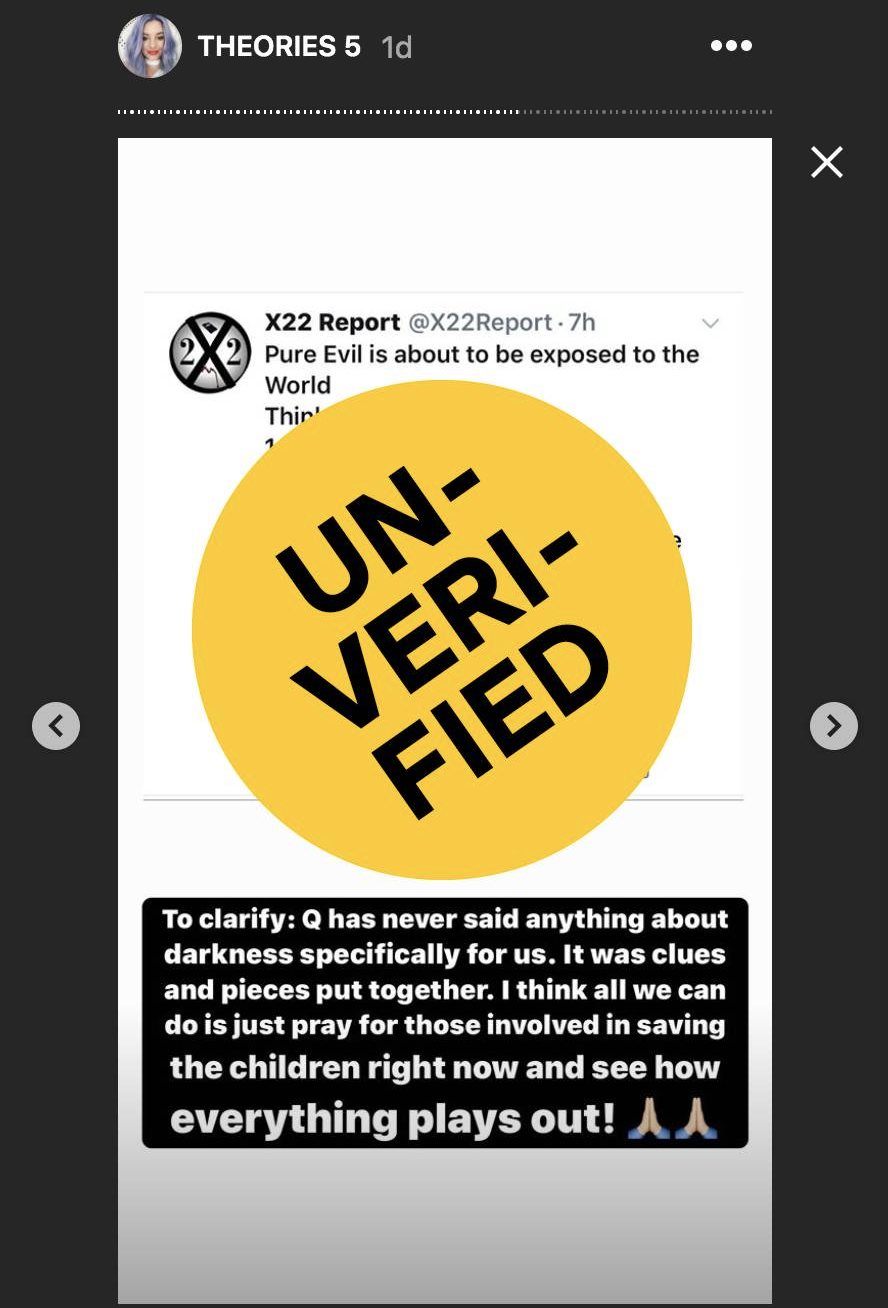 It’s unclear what impact, if any, this will have on their brands. On Schroeder’s posts, comments varied from supportive to complimenting her on her makeup. 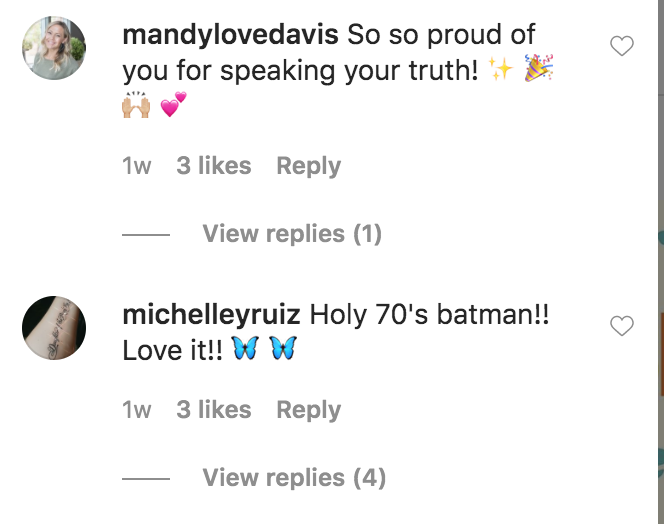 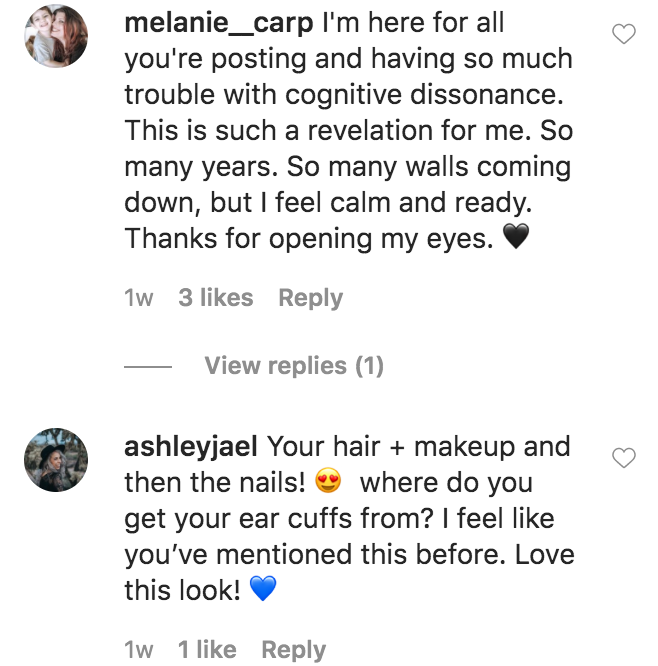 What a wild week! One week ago today, my eyes were opened. 😳✨ I wanted to share a little background on how I got here, why I’m here and what lead to this point. ⁣ ⁣ Keep your eyes and mind open as you listen! ❤️ And reminder: every single person, no matter your belief, is welcome in my space. We will all get through this together! 🙏🏼⁣ ⁣ ⁣ Makeup tutorial: https://www.instagram.com/tv/B-KpeAaHpLI/⁣ Headband: https://rstyle.me/+BgCU5-2lJto9jfBkcezGQQ⁣ ⁣ ⁣ #truthwins #eyeswideopen #woke #wwg1wga #nofear #peace #protectyourheart #protectthechildren #collectiveawakening #thegreatawakening #thestorm

On Henges’ page, some criticized her views, and some just seemed confused. Henges didn’t return a request for comment. 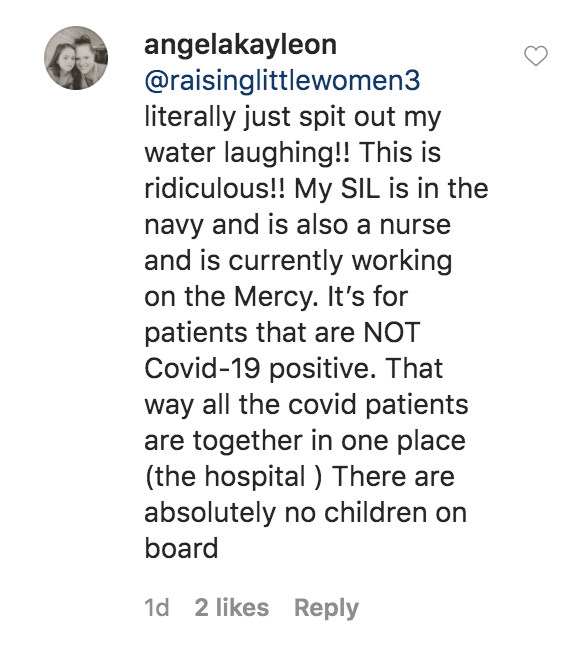 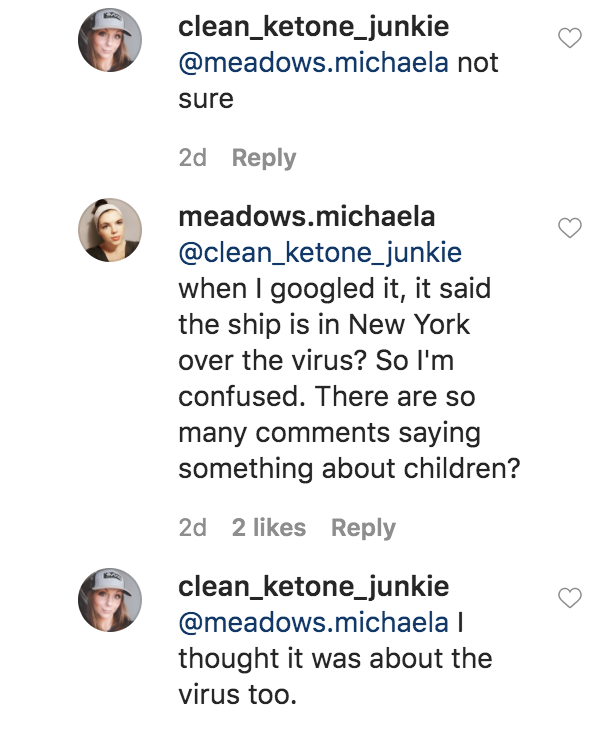 However, many commenters on a recent photo she posted of the USS Mercy seemed to believe in the same things she did.

“Infinite blessings to all involved in saving and aiding the children,” one person wrote. “Tears stream down my face at the images and the energy of this moment. Must be true because I feel it so deeply.”