‘Like army battle lines’: Welcome to council meetings in Victoria

Yarra City councillors walked down white lines constructed from masking tape, made abrupt 90-degree turns and sat on chairs so far apart they could barely hear each other speak.

There were no tables because they were deemed too hard to sanitise.

Mayor Misha Coleman found herself hunched over the computer in her lap, trying to chair a council meeting across three different platforms.

An immunocompromised staff member dialled in. So did a 70-year-old councillor.

“We managed but it was ridiculous,” Cr Coleman said. “It’s completely unsustainable – we are looking at three to six months of this. We have to be allowed to meet virtually.” 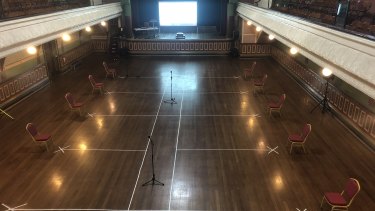 Welcome to council meetings in Victoria in the time of coronavirus.

While councils from Wagga Wagga in New South Wales, to Launceston in Tasmania to Perth in WA are conducting their meetings via video conferencing, councillors in Victoria are still compelled to attend in person.

The Local Government Act requires councillors to be physically present at council meetings in order to participate in council decision-making.

If there isn’t a majority of councillors in attendance, councils cannot make a quorum and the meetings cannot proceed.

Opposition local government spokesman Tim Smith and the Municipal Association of Victoria are calling on the government to urgently amend the act, saying in-person meetings are neither practical nor safe.

“I am getting overwhelming feedback from councillors, council staff and residents who don’t feel comfortable attending for obvious reasons,” Mr Smith said.

“If the Labor government don’t act on this, I have a private member’s bill ready to go,” he said.

“We understand that this can only be achieved by legislative amendment (unless a state of disaster is declared when a ministerial direction could be made). We are hopeful this will be dealt with when Parliament is recalled.”

Lord mayor Sally Capp says Melbourne City Council is continuing to advocate for virtual meetings for the safety of its team and the public.

The council is limiting the number and duration of its meetings and will only consider urgent matters such as COVID-19 management.

“Members of the public are strongly encouraged to engage with these forums via our online streaming service rather than attending meetings in person,” Cr Capp says.

A government spokesperson told The Age: “We're working with councils to consider the implications of coronavirus on their operations including the welfare of staff, compliance with the Act, elections and their meetings.”

In a bulletin on March 18, seen by The Age, executive director of Local Government Victoria Graeme Emonson said a number of councils had made enquiries about council meetings, in response to the challenges raised by COVID-19.

He said there was no provision for an exemption from the provision that councillors be physically in the room and no capacity to vary quorum requirements.

Mr Emonson said councils may wish to delegate decisions to the CEO and staff to enable continued council operations.

Like many councillors, Bass Coast councillor Michael Whelan describes himself as “in the older age group”.

“My wife and I have had to stop minding our one-year-old grandson, something which is quite painful, because we are taking the government’s calls to socially distance and isolate as far as possible very seriously,” he says.

In an email to Premier Daniel Andrews, Cr Whelan points out the irony of councils still being forced to meet in person, in stark contrast to the advice he sees on his TV screen.

“I cannot believe the cavalier approach that your minister is taking on this matter, words to the effect we haven't been able to do anything and we are not going to,” Cr Whelan wrote.

He said councils were either becoming dysfunctional through difficulty achieving quorums or putting their health and the health of their nearest at risk.

“Premier, I believe that if you are to be believed on the messages you are giving on this crisis you will direct this matter to be corrected immediately,” Cr Whelan said in the email.