The potential long-term harms of the rare clotting disorder linked to the AstraZeneca vaccine was a driving factor for recommending that COVID-19 immunisation only be given to those aged over 60 last week.

States and territories have also been given an outline of how many vaccines to expect over the rest of the year after an emergency National Cabinet meeting was held on Monday to discuss the state of the rollout. 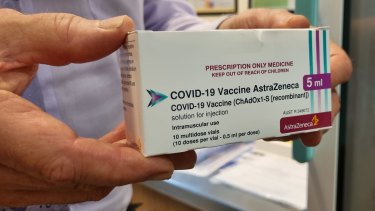 Authorities maintain the number of blood clots associated with the AstraZeneca vaccine is no greater than the background incidence of the condition.Credit:Stuart Layt

Professor Chris Blythe, who co-chairs the Australian Technical Advisory Group on Immunisation told a parliamentary COVID Committee hearing that the rate of death for people who experience the clotting disorder is low – just 3 per cent – and the risk of dying of clotting after receiving the AstraZeneca vaccine is one in 2 million.

Two women have died from the clotting disorder thrombosis with thrombocytopenia in Australia. But an important factor for the group’s decision was the long-term harm that will be experienced by some of the 58 other people who experienced the condition.

As of last Thursday, 36 people diagnosed with thrombosis with thrombocytopenia had been discharged from hospital, but four remained in intensive care.

To date, more than 6.59 million vaccine doses have been administered across the country, including about 4 million doses of AstraZeneca. Lieutenant-General John Frewen, head of Operation Covid Shield, told the committee the country has 2.3 million doses of Pfizer on hand, and a further 3.4 million across the rest of June and July.

Earlier on Monday the Lieutenant-General briefed the meeting of federal, state and territory leaders on planning for the vaccine rollout to the end of the year.

“What I did do at National Cabinet today was to issue planning parameters of the likely lowest allocations and the likely highest allocations that the states and territories can expect right out to the end of the year now. Previously, they haven’t had that information available,” he said at a press conference on Monday afternoon.

He also confirmed the Commonwealth was supplying first doses of the Pfizer vaccine to states and territories, and then delivering the matched number of second doses three weeks after along with more first dose deliveries.

Weekly Pfizer deliveries have dipped to just under 300,000 per week for June, but Lieutenant-General Frewen said his plan is to get as many vaccines as possible to states and territories.

“As we get into that third quarter, fourth quarter, we think we will have far freer flows of Pfizer and we will start to be able to allocate that more freely, but for now we have to manage the resources that we’ve got against the higher priorities,” he said.

“An increase overall in July, and we’ll have about 2.8 million doses of Pfizer coming in July, that will enable a baseline increase allocation to each of the states and territories,” he said.

“We believe in older individuals that is clearly in favour of receiving and AstraZeneca,” he said.