'Marsquakes' and a recreation of the Martian core help uncover origins

‘Marsquakes’ measured by NASA’s InSight rover and an experiment to recreate the conditions thought to exist in the Martian core could reveal how the planet formed.

Researchers from the University of Tokyo have been studying the seismic properties of iron-sulphur – thought to be the substance at the core of Mars.

It’s not known exactly what makes up the interior of Mars but the Tokyo team hope that by comparing their data to surveys from NASA InSight they can find out.

InSight has been measuring seismic activity on our planetary neighbour since 2018 in the hope of uncovering details of how it formed and how active it is.

The NASA probe has detected hundreds of significant events since touching down in 2018 and the Toyko team plan to compare that data to their findings. 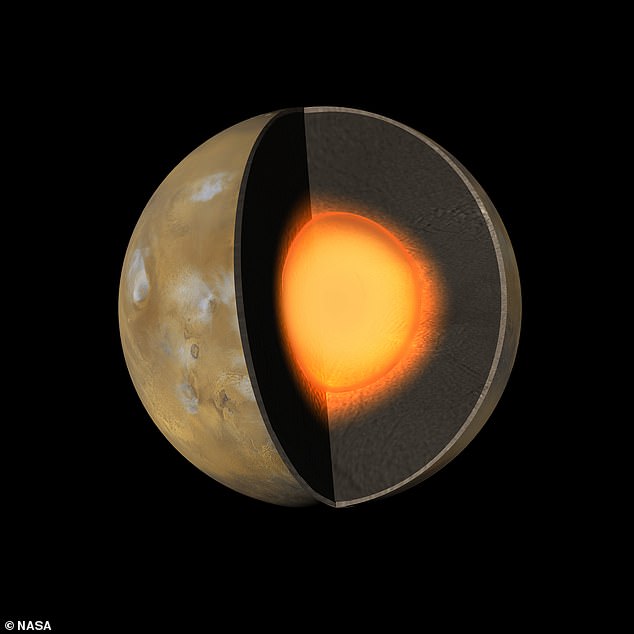 Seismic data reveals how the underground rock of a planet is layered – as well as its origins but you need to know the seismic properties of those rock types first.

Lead author Dr Keisuke Nishida, a planetary scientist at the University of Tokyo, said: ‘The exploration of the deep interiors of Earth, Mars and other planets is one of the great frontiers of science.

‘It is fascinating partly because of the daunting scales involved, but also because of how we investigate them safely from the surface of the Earth.’

The core of Mars is thought to mostly comprise iron with some possible lighter elements such as sulphur which is why Nishida and team studied the metal.

The results of comparing the iron-sulphur findings to the Marsquake data will either confirm existing theories about the planet’s composition or call into question the story of its origin, said Nishida.

Dr Nishida added: ‘Taking our results, researchers reading Martian seismic data will now be able to tell whether the core is primarily iron-sulphur alloy or not.

‘If it isn’t, that will tell us something of Mars’ origins.

‘For example, if Mars’ core includes silicon and oxygen, it suggests that, like the Earth, Mars suffered a huge impact event as it formed.

‘So, what is Mars made of and how was it formed? I think we are about to find out.’

Mars is between 35 million and 250 million miles from us depending on where Earth is relative to the sun.

Donald Trump wants the first manned mission to the Red Planet by 2033 but getting there will be extremely difficult and dangerous.

Dr Nishida said: ‘It is sometimes more sensible to investigate the Red Planet through simulations than to send an expensive probe or, one day, people.’

Given how inaccessible the Earth’s core is, direct observations of Mars’ will likely have to wait some time.

But seismic waves are like enormously powerful sound waves. They can travel through a planet and offer a glimpse inside.

Dr Nishida said: ‘However, even with the seismic data there was an important missing piece of information without which the data could not be interpreted.

‘We needed to know the seismic properties of the iron-sulphur alloy thought to make up the core of Mars.’

To find out the seismic properties of a mineral they need to know how fast the different waves are going as they pass through.

There are the primary, or P-waves which are the fastest type of seismic wave in molten iron-sulphur allows and sheer, or S-waves that arrive slower.

‘Due to technical hurdles, it took more than three years before we could collect the ultrasonic data we needed, so I am very pleased we now have it,’ said Nishida.

‘The sample is extremely small, which might surprise some people given the huge scale of the planet we are effectively simulating.

A molten iron-sulphur alloy – like the one assumed to be in the core of Mars – heated to just above its melting point of 2,730 degrees Fahrenheit and subject to 13 gigapascals of pressure has a P-Wave velocity of 15,354 feet per second. 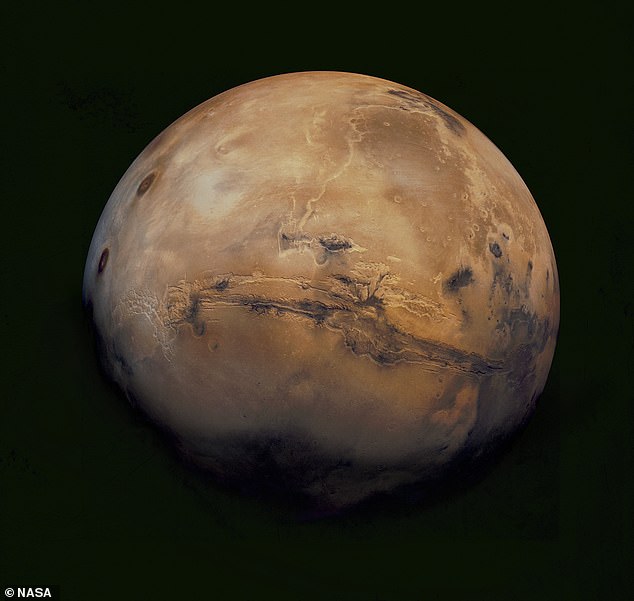 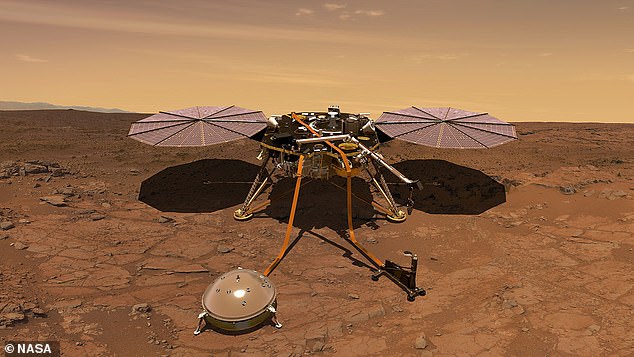 The researchers used a device called a KMAP (Kawai-type multianvil press) – designed to produce extremely high pressures in a very small space to simulate the conditions thought to be present in the Martian core.

This enabled them to image the samples to then work out the P-wave values.

InSight is equipped with seismometers that detect ‘Marsquakes’. They are not big – only 3 to 4 on the magnitude scale if you were standing directly above them.

Their size and frequency is actually not that dissimilar to the UK where a magnitude 4 event will occur roughly every two years.

But they show that far from being dull and dead Mars – like Earth – is an active planet.

Taken together, Insight’s data should reveal the position and nature of all the rock layers below the surface of Mars – from the crust to the core.

It’s information that can then be compared and contrasted with Earth. Both planets formed around the same time – about 4.6 billion years ago.

But they are very different – which has baffled experts for decades. Dr Nishida believes the mystery is about to be solved.

The findings of the experiment have been published in the journal Nature Communications.

Mars has become the next giant leap for mankind’s exploration of space.

But before humans get to the red planet, astronauts will take a series of small steps by returning to the moon for a year-long mission.

Details of a the mission in lunar orbit have been unveiled as part of a timeline of events leading to missions to Mars in the 2030s.

Nasa has outlined its four stage plan (pictured) which it hopes will one day allow humans to visit Mars at he Humans to Mars Summit held in Washington DC yesterday. This will entail multiple missions to the moon over coming decades

In May 2017, Greg Williams, deputy associate administrator for policy and plans at Nasa, outlined the space agency’s four stage plan that it hopes will one day allow humans to visit Mars, as well as its expected time-frame.

Phase one and two will involve multiple trips to lunar space, to allow for construction of a habitat which will provide a staging area for the journey.

The last piece of delivered hardware would be the actual Deep Space Transport vehicle that would later be used to carry a crew to Mars.

And a year-long simulation of life on Mars will be conducted in 2027.

Phase three and and four will begin after 2030 and will involve sustained crew expeditions to the Martian system and surface of Mars.