A manager at Melbourne rail operator Metro Trains has been suspended amid an investigation into alleged corruption within Victorian transport. 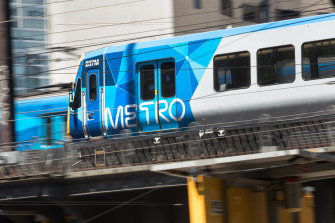 The troubled Murray Basin rail project, which has faced cost blowouts and delays, has been ruled out of the IBAC investigation.

V/Line CEO James Pinder was suspended late last week in relation to the probe, which is also targeting the Department of Transport – the agency overseeing V/Line.

Mr Pinder was appointed chief of V/Line in late 2016. He was also the general manager for rolling stock at Metro between 2012 and 2016.

Head of transport services at the Department of Transport Nick Foa has been appointed acting chief executive at V/Line while a longer-term arrangement is made.

A Metro spokesman confirmed Mr Bollas had been suspended until further notice, but could not provide further details as the case was under investigation.

"While we are unable to comment on an ongoing investigation, we are committed to upholding the very highest of standards of integrity," he said.

A Department of Transport spokeswoman said she was not aware of department staff being investigated by IBAC.

"No Department of Transport staff have been suspended or stood down and, to our knowledge, no department staff are subject to this investigation," she said.

An IBAC spokeswoman said: "As this matter is an active investigation, for legal and operational reasons, IBAC is unable to provide further information at this time."

Get our Morning & Evening Edition newsletters

The most important news, analysis and insights delivered to your inbox at the start and end of each day. Sign up here.