Mission to save Sydney’s rarest eucalyptus species from extinction

When Steve Douglas was a budding ecology student, a quarter of a century ago, he discovered what turned out to be a new species of tree on a street corner just a few hundred metres from his home in Sydney’s Hills District.

“It was more a case of driving past it [than walking by],” Dr Douglas, now a private ecologist said.

The multi-trunk tree was, on closer inspection, not a common scaly bark eucalyptus like a neighbouring tree. 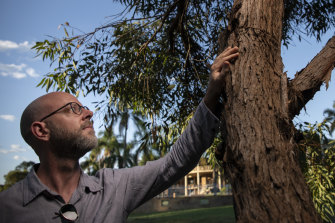 Ecologist Steve Douglas beside the eucalyptus species, dubbed E. Cattai, that he discovered walking near his home in the Hills District of north-western Sydney.Credit:Wolter Peeters

The protracted assessment process to determine and name a species gathered dust for years as the tree became increasingly threatened by land development.

The government finally declared it to be critically endangered in 2015, dubbing it Eucalyptus sp. Cattai pending the granting of a final name for greater Sydney’s rarest eucalypt.

The fate of the Cattai has taken a few twists down the years, offering insights into the management of rare plants and animals and how at-risk species can be held back from the brink of extinction. 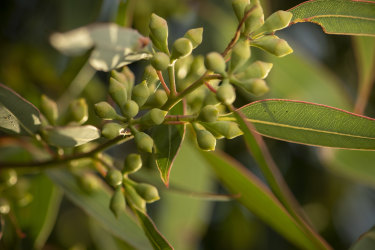 Seed pods on the E. Cattai species were collected from a range of plants by Enhua Lee and colleagues in the NSW Department of Environment to be grown into seedlings. Puzzlingly, no juvenile plants have been found in the wild.Credit:Wolter Peeters

The NSW government has given the tree a priority on its Saving Our Species program – a scheme itself up for review by the end of June – and started replanting in a national park more than 50 kilometres from natural stands. Predicted climate change was one factor in the locality choice.

The program now counts 152 projects and is investigating similar actions for more than 400 threatened species and animals, and 39 ecological communities. NSW has about 1000 species known to be threatened.

That the Cattai might need some extra help was clear to Enhua Lee, a conservation ecologist within the Environment Department, who counted some 660 of the 4-5 metre trees in the wild with their leathery and lance-shaped leaves but found only mature individuals.

“Why are there no seedlings?” Dr Lee said. “We don’t know what stimulates natural germination.” 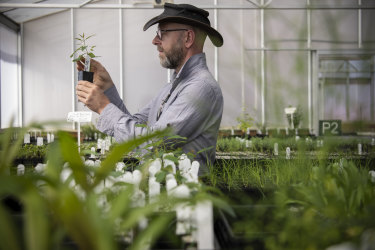 Ecologist Steve Douglas with one of the seedlings bred for replanting in the wild at the Australian Botanic Garden at Mount Annan.Credit:Wolter Peeters

That the plant generates seeds is obvious enough. A visit by the Herald with Dr Douglas to the original tree he spotted found it producing seeds but there was no sign of any taking hold nearby.

A team at The Australian Botanic Garden at Mt Annan, led by Brett Summerell, stepped in to investigate the genetics of the Cattai between October 2018 and February 2019, and breed a variety of the plants.

These were then moved to a secret location in the national park starting last August, beginning with a batch of sixty plants with another sixty to come. 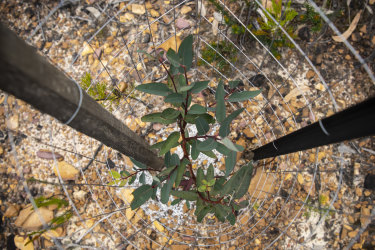 One of the plantings that is taking hold in its new home. The secret location was chosen because of its suitable soils but also because it will likely be suited to predicted climate change in the region.Credit:Wolter Peeters

“We obtained a significant proportion of the total variety [of the Cattai],” Dr Summerell said. “We managed to get good genetic variability, which is not always the case.”

Out in the national park, each of the plantings is protected with a metal mesh, with most doing well despite signs of wallaby tastings. “They’re all looking good, although they have been chomped on a bit,” he said.

Dr Lee set the plants up at distances of at least eight metres in groups of six. “I’d noticed that they have this tendency to clump up, so I’m mimicking this natural feature,” she said.

Even though wet weather has been good, Dr Lee will still water the plants if they don’t receive at least 1 millimetre of rain over five days. Monitoring will last until at least 2026. 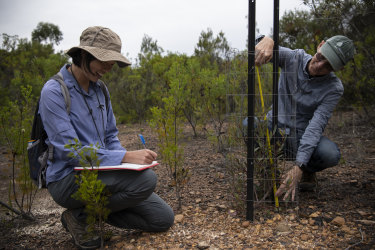 Ecologist Enhua Lee (left) from the NSW Government’s Saving Our Species unit checks on progress of one of the plantings of the Cattai tree in its new climate-friendly location south of Sydney. She is joined by Brett Summerll, director Science and Conservation at the Royal Botanic Garden.Credit:Wolter Peeters

The decision to relocate the plant was prompted by the trees restricted range and the fact that most were on private land in one of Sydney’s fastest-growing development zones.

Researchers picked the new home in part because future predictions indicate it will still be suitable if conditions dry and heat up as expected.

Dr Summerell said similar calculations are being applied for other species being moved, such as the Hibbertia fumana, Rothbury Persoonia and some orchids.

“Most of these don’t necessarily have an explicit climate change perspective, but as the technology has developed we are starting to include the genomics and climate modelling in both the location selection and in the way in which plants are arranged to maximise genetic exchange,” he said. 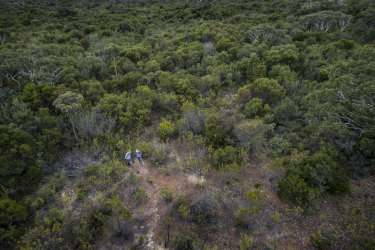 Dr Douglas, who has identified at least five new species, said “there’s an absolute warehouse full of species likely to need translocation due to climate change”.

“Most of these will be at high elevations where there simply isn’t anywhere higher for them to move or even to be moved locally,” he said.

Those challenges, combined with current threats from habitat loss and invasive pests among others, mean that many more species are going to need interventions like those for the Cattai in the future.

“There needs to be recurrent funding – not just for five years…to recruit and retain staff with the appropriate skills,” Dr Douglas said. “You be losing things before they have got a name and even before they get [an endangered] listing.”

Our Morning Edition newsletter is a curated guide to the most important and interesting stories, analysis and insights. Get it delivered to your inbox.