Tokyo: Australian para-canoe athlete Curtis McGrath, who lost both his legs in Afghanistan, made it back-to-back gold medals on Friday morning and has set his sights on more glory on Saturday.

The former soldier streaked away in the last 50 metres of his men’s kayak single 200m KL2 final to hit the line in 41.134 seconds, more than one second clear of Ukraine’s Mykola Syniuk. 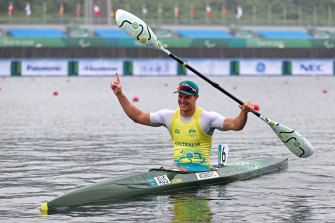 “I’m super happy with my performance,” said McGrath, who won the event at Rio in 2016. “Going back-to-back is one of those feelings that I’ve confirmed to myself that I can come to the biggest event and perform.

“I know I’m not the best starter in the field, so I’ve been working really hard on that and thankfully that put me in good stead for half the race. Then my strength is at the end, so that’s where I came through.”

McGrath still has his VL3 200m final to come on Saturday.

“Hopefully the rain can bugger off,” McGrath said. “We’re just wanting to go out there and compete and that field that I’m up against is tough.”

A large press pack greeted McGrath after his race. The story of him losing both legs after stepping on an explosive device has gained traction since the Taliban’s recent takeover of Afghanistan.

“I was there searching for improvised explosive devices, clearing the way for school buses, for people going to work or whatever,” McGrath said. “I’m pretty content with my contribution to the country. It’s up to the people of Afghanistan now and hopefully they can find a peaceful resolution.

“Obviously it’s a tragic situation in Afghanistan and my heart does go out to the people there.”

McGrath stands to make $40,000 within two days if he can win another gold on Saturday, following news the federal government will give Paralympic athletes the same medal bonus as Olympians. Anyone who wins gold will receive $20,000, second gets $15,000, while bronze medallists take home $10,000.

“We just want an equal playing field and equal opportunities and that’s what the Paralympics are about,” McGrath said. “[It would be great] if everyone, even corporate Australia, can get out there and sponsor a Paralympic athlete. Not just myself, not just a gold medallist, but someone who’s working every day, working hard, and doing the same amount of work, the same amount of effort as an Olympian, as an NRL player and AFL player. [They] deserve the rewards. I’m really grateful that the government stepped forward.”