Morrison could have done the deal of the century on climate, but opted for tribalism

Joe Biden and Scott Morrison will never really agree on climate change. It is an urgent passion project for the US President, while the Australian Prime Minister has always seen it as a political issue to exploit, or avoid, depending on the electoral balance between the cities and the regions at any given point in time.

The irony for the two leaders is they finally found common ground this week in the gridlock of their respective parliaments. 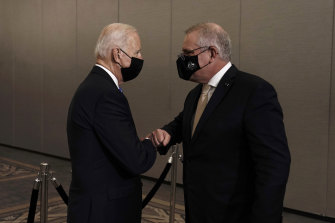 Biden, like Morrison, has left his policy run to Glasgow until the last possible moment. Both men are negotiating with the conservative fringe of their governing parties on terms that risk undermining their position at the United Nations climate conference which kicks off on October 31.

Biden’s unfinished business is his plan to expand the US social safety net. Among the proposals is a $US150 billion ($200 billion) fund for clean energy projects. Democract senator Joe Manchin, from the coal mining state of West Virginia, declared last week that the spending was not needed, and he didn’t want his constituents to foot the bill. Manchin, along with Democrat Kyrsten Sinema of Arizona, want to reduce the total cost of the $US3.5 trillion package by as much as half. Biden has suggested he would be happy with a deal worth up to $US1.9 trillion, which preserves his reform agenda for education and health and gives him something on climate change to take to Glasgow.

Morrison would love to have a version of that problem with the National Party – spend less, not more to secure our agreement.

Biden has pleaded with Democrats in the Congress not to embarrass him on the international stage, arguing that a deal at Glasgow is critical to restoring faith in American global leadership against the autocrats in Beijing and Moscow. 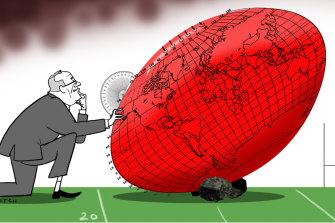 Morrison is no doubt running this argument with the Nationals – don’t send me to Glasgow as a climate denier, with your scruffy tail wagging my minimalist policy.

Biden, for his part, would love the options available to Morrison. The Prime Minister doesn’t have the alternate government, or Rupert Murdoch standing in his way. In fact, they share his ambition to transform the Australian economy by reducing our greenhouse gas emissions to net zero by 2050.

If Morrison had a bit of Hawke, Keating, or Howard in him, he might have called the bluff of his junior coalition partner and offered Labor the deal of a century to end the climate change wars. A simple parliamentary motion committing Australia to net zero greenhouse gas emissions by 2050 would have been his letter of entry to the head table at Glasgow. He could show it to Biden and say: “Now that’s how we do reform in Australia, with the major parties on the same page.”

He could even add a higher ambition for 2030 by codifying the existing targets of the states and territories. The NSW Coalition, for example has matched Biden’s own pledge to halve emissions over the next 10 years.

But as one senior government member who wants action on climate change put it to me, no one trusts Labor after the experience of 2018. Bill Shorten, the source said, had the chance to throw Malcolm Turnbull a lifeline on the National Energy Guarantee but preferred to play short-term politics instead.

Morrison has known from Biden’s very first day in office in January that the Coalition would have to execute one of the great backflips in Australian political history, and take climate change seriously.

The experience of the 1980s and 90s, from the float of the dollar to gun law reform, says a project on this scale can only work as policy – and politically – if it is seen to be bipartisan.

But this is not the Morrison way. He is pursuing reform on behalf of his tribe, on behalf of one side of politics only in the spirit of Julia Gillard’s carbon tax and John Howard’s WorkChoices. And he is running the process in a bubble, without bringing the public into his confidence. 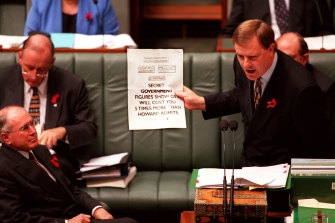 Remember the GST, the last reform which did not have bipartisan agreement but did survive a change in government? The Coalition governed as grown-ups back then, taking a year to explain the problem they wanted to solve, another year to negotiate with the Senate and a further 12 months after the new tax system came into force on July 1, 2000 to fine tune the policy. The Nationals led by Tim Fischer and John Anderson were on the frontline selling the program.

Howard, and treasurer Peter Costello had the added advantage of a vested interest truce. Business groups and the welfare lobby agreed that the tax system needed reform. Interestingly, a similar alliance is available to Morrison on climate change if he chooses to activate it.

Consider the domestic players which stood in the way of reform in the past but are now willing to give the government the “green light” to Glasgow – the National Farmers’ Federation, the Business Council of Australia, the two mining giants BHP and Rio, and, of course, News Corp.

But none of this seems to matter to Morrison. He just wants to placate the Nationals, and clear the decks for the next election.

Meanwhile, the Prime Minister is telling our allies that we will meet and beat our previous commitments under the Paris Accord. OK then, why not spell out that new trajectory in Glasgow? But the Nationals have vetoed any change to the 2030 target.

Morrison has settled on a passive game plan. He has been given a free kick by the states and territories, by business, and even the tabloid media, but won’t take the shot. Yet, he insists he should be awarded the points anyway because we will meet and beat our targets.

By leaving it to last, and not exploiting the free kicks on offer, Morrison duds the very people he should be looking after in the regions by not preparing them for, and protecting them from, reform. But will that matter in the end?

Liberal strategists will have noted the detail of the recent Canadian election. Justin Trudeau called an early poll hoping to translate his popularity during the pandemic into a majority for his government. But the public rebuffed him by repeating the pre-COVID result of 2019, in which the big cosmopolitan cities sided with Trudeau’s Liberal Party, while the regions stuck with the conservative opposition.

The polarisation is best seen in the head-to head between Toronto, a city more diverse than Melbourne or Sydney, and Alberta, a resource-rich province more parochial than Queensland or Western Australia. The score in Toronto was 48 seats to the Liberals, and just five to the conservatives. In Alberta, it was 30 conservative, two Liberal and two independent.

Morrison might well have the final smirk if that pattern, which we also saw in Australia in 2019, repeats at the next federal election with another miracle victory for the Coalition. He would have a mandate on climate change to do whatever he wants, or perhaps nothing at all.

George Megalogenis is a journalist, author and commentator.