A talented make-up artist has shown how she transforms into Boris Johnson and Scottish singer Lewis Capaldi using her incredible skills – and has even garnered the attention of the Bruises singer.

And she has even been forced to post videos of herself moving, because fans refused to believe she wasn’t a painting – offering to buy what they thought were drawings.

The make-up artistry lecturer at Ayrshire College said she has never done lookalike transformations before, and said she simply posted the looks to her 385 Twitter followers to motivate her students. 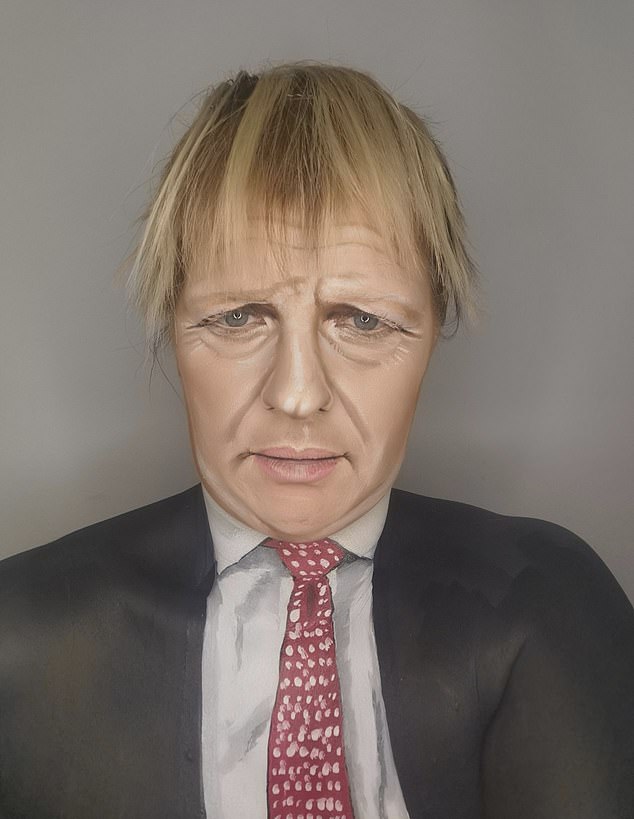 Many of Alana’s designs focus on the coronavirus pandemic heroes, including supermarket staff and care workers, along with key figures such as Boris Johnson and the UK’s favourite PE teacher Joe Wicks.

She told FEMAIL: ‘When we went into lockdown all the students had to go home so myself and the lecturers started doing collaborations on our college Instagram page that we have, just to keep the students motivated every day.’

Alana, who qualified as a makeup artist 12 years ago, added: ‘One of my students suggested we did an NHS-inspired makeup and that was the first one that I did to thank the NHS which was my first collaboration. 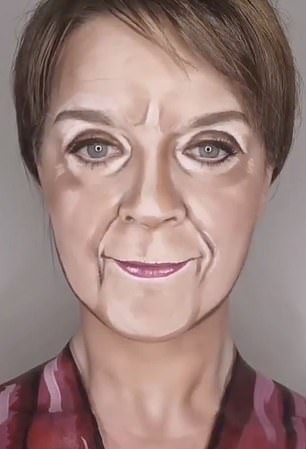 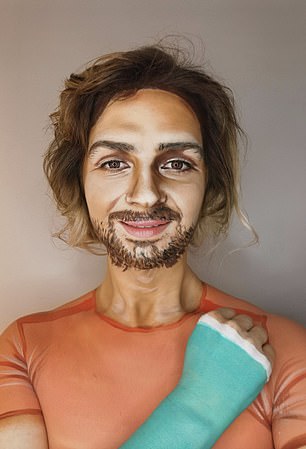 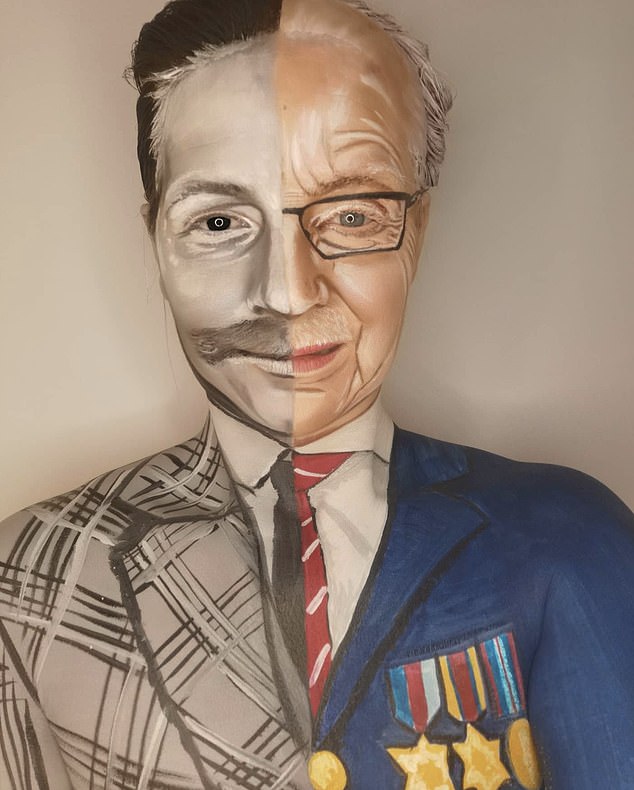 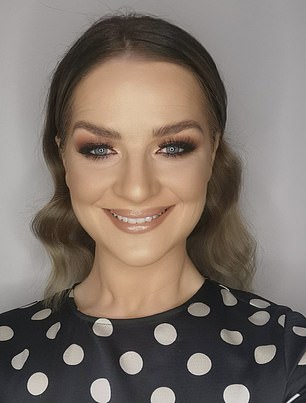 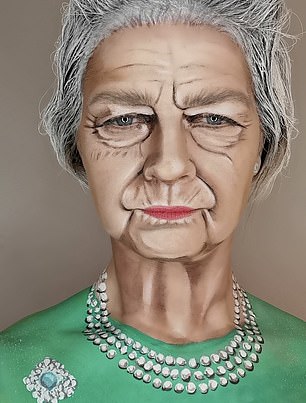 Alana Pignatiello, 38, with her usual makeup look (left). Alana transformed as Her Majesty The Queen (right)

‘After that somebody from the care sector contacted me and asked me if I would do one to thank and highlight the care staff because they quite often get forgotten about because a lot of focus is on the NHS.

‘My kids started getting involved and thought: ‘Who else can we thank?’

‘And that’s why I did the superhero one to thank all of the supermarket staff and Joe Wicks because my boy does his videos every morning – I definitely wanted to thank him because he keeps my eight-year-old busy!’

Alana said her first lookalike transformation was the UK’s favourite PE teacher Joe Wicks who has posted daily videos during lockdown to get children moving.

The amazing design features Joe’s signature brunette hair with stubble and even a cast after he had an operation on his hand. 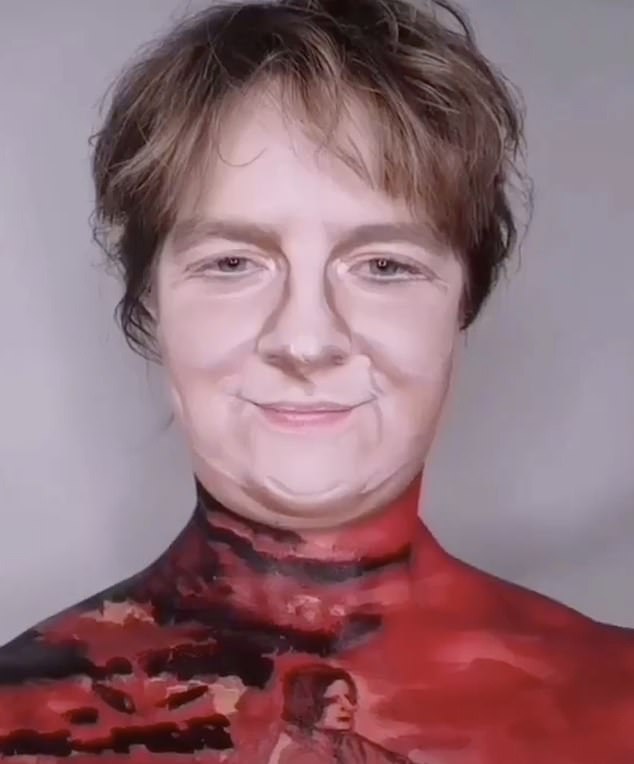 Lewis Capaldi was blown away by the uncanny resemblance after he retweeted the video captioned: ‘WHAT THE F***’

The make-up artist was shocked when Joe reposted the look on his Instagram story with others such as WWII veteran Captain Tom Moore sharing her transformations.

And Scottish singer Lewis Capaldi, 23, was blown away by the uncanny resemblance after he retweeted the video captioned: ‘WHAT THE F***.’

The video showed a fresh-faced Alana sweeping a makeup brush across the screen to reveal the singer while miming to his hit ‘Before You Go’ with the caption: ‘Lewis Capaldi transformation. Upping my game making a wee video.’

And the footage went viral with more than 54,000 likes, as Alana commented: ‘Thank you so much for sharing Lewis, what a great guy you are. My phone hasn’t stopped all day! 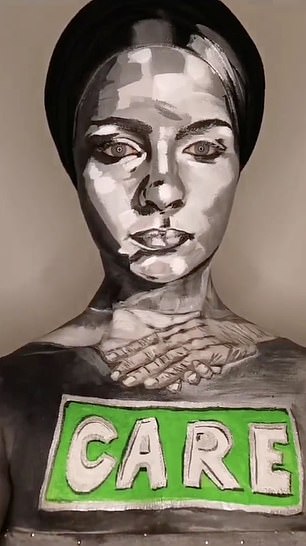 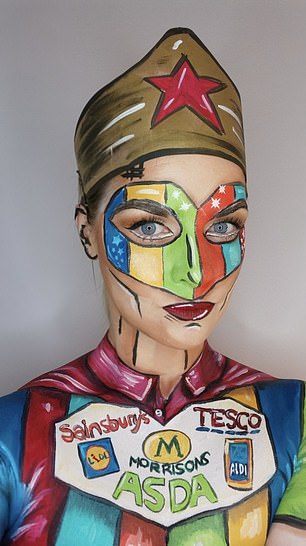 ‘So amazing you took the time to repost this. It took me a while to get over the shock. Thank you.’

The lecturer of five years added: ‘People then started to send me requests of people that I could do so that is how I ended up doing the Queen, Boris Johnson, Nicola Sturgeon and Lewis Capaldi.’

‘I have been sent lots of suggestions from people so I am just going to work through them.’

‘Boris Johnson was the most requested one to do and I thought: ‘How I am going to do the Prime Minister!?’

‘It’s really fun – I do my face and then body paint my chest area so all of the clothes in the pictures are all painted on.’

‘Captain Tom Moore was another top suggestion and I had seen a picture of him when he was younger which was a black and white picture. 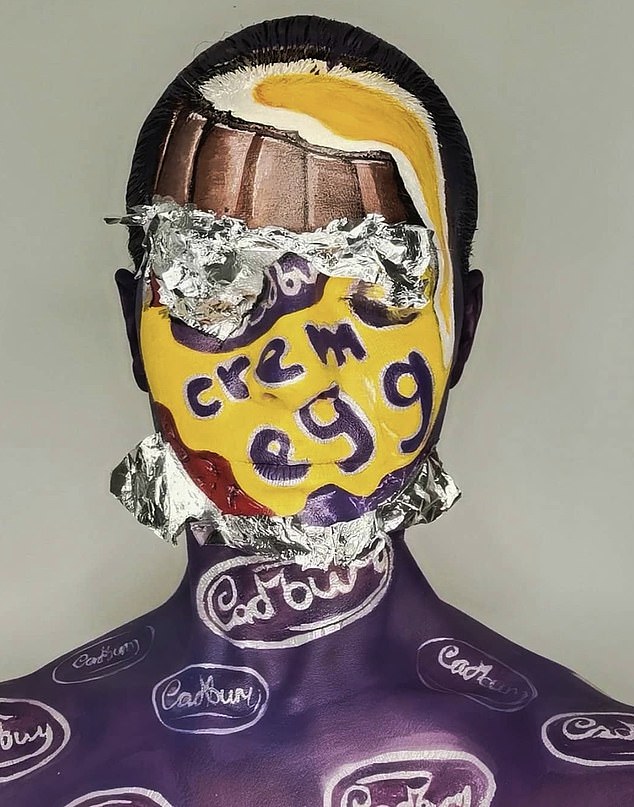 ‘I thought I would try and do something different than by doing both – and he reposted it as well which was great!’

However, Alana is shocked that her posts get so much attention and has been overwhelmed with the responses to the transformations.

She said: ‘It’s really funny because when I post these I don’t think that the person will actually see them. It’s just for me to keep busy and happy in lockdown’

‘So when somebody sees it – it is unbelievable. When Lewis Capaldi saw his, my wee girl ran in and was like ‘mum he has retweeted you! I was totally stunned – I could not believe it. ‘

‘They take around three hours but some of them take longer. I just have a picture of the person in front of me on my phone and then just do it in the mirror.’

‘I don’t have wigs for any of them – that is all my hair! My hair was brown at the top and blonde at the ends before I dyed it and that is how I did Boris Johnson by tying it up and just brought my hair forward.’

‘The hardest transformations are actually the women –  I have done Nicola Sturgeon and Emma Watson and I find it harder to make myself look like a woman.’

‘Especially if it is a younger woman because they don’t have a lot of light and shade on their face – the hardest would be Emma Watson.’

‘My favourite one was the Cadbury’s Creme Egg and the zombie because looking at it is difficult to see where my face starts and ends from a skill point of view.’

‘My son absolutely loved the Joe Wick’s one – he could hardly look at me though!’

‘Joe Wicks was the first one of making myself look like somebody – this is not the thing I normally do.

‘Outside of my work as a lecturer I am a bridal makeup artist so I have never tried these transformations before until lockdown.’

‘A lot of people when I posted the care worker one said ‘that is an amazing picture can I buy it? and I said ‘that’s me!’

‘I get it off straightway, I take the picture and go straight in the shower.

‘It is a lot of makeup and body paint and the makeup on my face is heavy makeup which I don’t usually wear. If I kept it on my skin would be a disaster.’

She continued: ‘I just love the fact how much I can change a face. And by doing bridal makeup I can accentuate their face, I don’t want to change their face, I just want to make them a more beautiful version of themselves.

‘To me it is an art because I do all different types of makeup for me it is amazing how you can change somebody’s face. I find it really relaxing during lockdown as we have a lot of time.

‘And for me, going away and doing that for three hours helps with mindfulness.’