Motorists will be encouraged to return to the CBD in the lead-up to Christmas, lured by cheap and easy parking, as Melbourne Town Hall throws the book at the city's economic recovery.

In a departure from years of car-averse planning, the City of Melbourne will make driving to the CBD more attractive in the short term by working to make on-street and off-street parking cheaper, revisiting parking meter time limits and pushing for more cuts to the congestion levy. 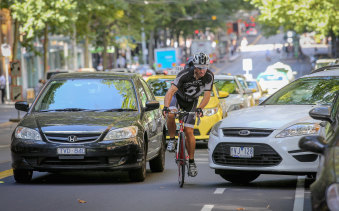 Cars will be encouraged to return to the CBD as part of a push to reinvigorate the city’s economy.Credit:Wayne Taylor

It will also work with the state government to promote the use of public transport.

The push for cheap parking was backed by the majority of the newly elected Melbourne council on Tuesday night, but opposed by residents who wrote to the council after The Age revealed the plans on Tuesday.

Following Tuesday night's meeting, council officials will hold meetings with private car park operators with a view to cutting parking fees, and will invite representatives from retail, entertainment and hospitality groups to join the discussions.

Lord mayor Sally Capp said the parking push should be seen as a "short-term response to revitalising our city".

"We need to do … everything that we can do to overcome any barriers real or perceived to people choosing to come into the city for their work, for their dining, for their shopping [or] for their entertainment."

The plan is a departure from last year's Transport Strategy 2030, which aimed to cut the amount of traffic passing through the CBD and repurpose road and parking spaces for pedestrians and cyclists.

It has been strongly opposed by transport advocates including the Bicycle Network, which described the new plan as: "a proposal to back-pedal on years of progressive and successful urban reinvention and instead make Melbourne grim again".

"There is no evidence that cheaper car parking will make a fig of difference to the economic health of Melbourne," it said.

But Melbourne councillor Philip Le Liu described the Christmas and New Year season as the "sugar hit" the city needs to get back on its feet.

He said cheap or free parking in suburban shopping centres was placing the CBD's retail precincts at a disadvantage.

"We do not want to lose any of that [advantage] to our suburban neighbours and competitors because on the weekend, I definitely was really envious of the amount of people that were going there and visiting and buying things from them."

The council will also seek at least a 25 per cent reduction to the congestion levy paid to the Victorian government, which would cost the state more than $25 million over 12 months.

Any savings car park operators banked by not having to pay part of the congestion levy would have to be passed on to customers.

The council will review the drive for cheap parking in December.

Public transport use is dramatically down, with most office towers vacant while work-at-home directives remain in place.

Cr Capp will write to the Victorian government asking it to revisit its COVID-19 Roadmap to Reopening relating to work-from-home directives. Subject to public health advice, the council wants most of the CBD's thousands of workers to be back at their desks as soon as possible.

It follows revelations 10 major employers, including NAB, ANZ, Metro Trains, PwC and Telstra, have signed up to a City of Melbourne "CEO pledge" vowing that as soon as public health restrictions are relaxed, they will bring at least 70 per cent of their workforce back to the CBD.

In the past two weeks, road use has increased to more than 80 per cent of pre-pandemic levels across Melbourne. But last week pedestrian activity in the CBD was down almost 75 per cent compared with the same time last year.

Public transport use is down to 26 per cent of pre-pandemic levels.

Grattan Institute transport and cities program director Marion Terrill has described the push to encourage car use as a missed opportunity.

"If we do encourage people to always reach for their cars in these situations, and it's cheaper, it's pretty clear where that's going to end up. We could say now is the perfect time in fact for congestion charging, because congestion at the moment is pretty low."