My son was expelled for sharing a girl's nude photo

Recent headlines about ‘rape culture’ and sexual abuse in schools have stirred up painful memories for my family.

Last week Ofsted announced it would visit some of the schools and colleges named on the Everyone’s Invited website to check if institutions are doing enough to protect their female students. It comes as more than 14,000 anonymous testimonies of harassment and assault against young women and girls have been collated on the site.

As these stories emerge, I can’t help but feel a sense of conflict as the finger of blame is pointed at ‘toxic’ schoolboys. Boys like my son, Henry.

I still recall the day five years ago when I was at work and received a call from Henry’s boarding school telling me there had been an incident and that I had to go there straight away and collect him. 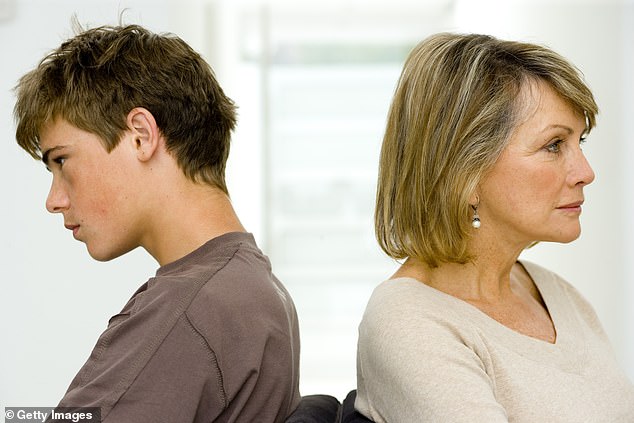 A mother who lives in London, recalls her son Henry being expelled for sharing a girl’s nude photograph when he was age 15 (file image)

My mind was racing as I drove the 60 miles to the school — I knew he hadn’t been involved in an accident, so was safe, but I couldn’t imagine what else had happened.

Henry was about to turn 16 and had been back at school for just a few weeks following the Christmas holidays.

He was a smart, happy, sociable teen who enjoyed his co-ed boarding school, while his younger sister, 14 at the time, was at a private day school in the London suburb where we lived.

He was very keen to board at 13 and, although it was against my better judgment, we allowed him to go as his father had enjoyed his time at an all-boys boarding school.

As parents, we felt a mix of girls and boys would be best for him, as he got on so well with his sister and always had female friends. But oh, how I regret that decision.

I arrived at the school and was shown into the headmaster’s office. He explained there had been an incident in which a naked photograph of one of the girls in his year had been circulated among the boys, and the boys involved were to be suspended for two weeks while an investigation was carried out.

That was all the information I was given.

I was told we’d be informed of the outcome, and as the headmaster showed me out of the office, a shocked-looking Henry was waiting outside the door. 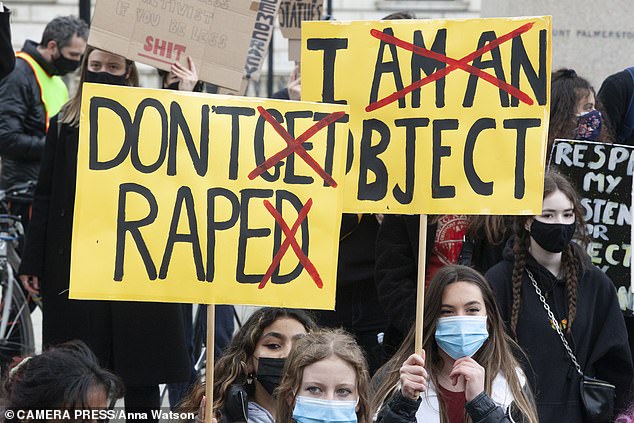 The mother said Henry shut himself away in his room after explaining that he forwarded the photograph without thinking. Pictured: Women protest against male violence this month

The journey home was awful. Henry was crying and wouldn’t look at me. My instincts as a mother kicked in — I knew it wasn’t the time to be asking questions, I had to get my child home and look after him.

For the next couple of days Henry shut himself away in his room after telling us his side of the story: that his friend had sent him the naked photo and, without thinking, he had forwarded it to a friend in another school.

When I asked how his friend had got the photo in the first place, he said the girl had asked her friend to take the picture, then sent it to the boy, who she fancied. It was just a bit of fun. No harm was meant.

As the mother of a daughter, I’m well aware of the pressure on young girls to look and behave in a certain way, and the heartbreakingly early sexualisation of them on social media.

Thankfully, my daughter is sporty and wasn’t interested in boys until her late teens. She rarely, if ever, posted pictures of herself on social media.

But I appreciate how hard it must be for mothers whose daughters do post pictures in bikinis and crop tops. This is so much a part of everyday culture now that it’s almost impossible to know how to deal with it.

We regularly had discussions with our children about staying safe on social media, and shared our values on relationships and equality.

Along with the PSHE (Personal, Social, Health and Economic) lessons all pupils receive at school, which includes sex education, we believed Henry was in a nurturing environment — one that we were paying nearly £40,000 a year for.

We were confident our lovely, bright son would navigate his teenage years successfully.

I did not for one minute believe that what Henry became involved in was malicious or willingly harmful. Yes, he made a mistake, but he knew that now and was very sorry. That is the nature of being a teenager — they make mistakes and learn from them. 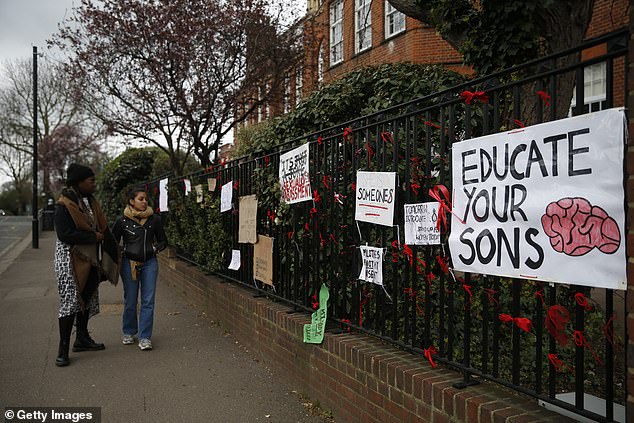 Henry was expelled without being given advice on what to do next, just months before his GCSE exams. Pictured: Protest against male violence

A week later, Henry’s housemaster called to say he was sure it would blow over. We all felt an enormous sense of relief.

However, before Henry was due to return, the headmaster asked us in for a meeting. He wouldn’t give any more details, but his tone gave me a sense of dread in the pit of my stomach.

In a brief meeting, the headmaster said that any kind of sexual transgression would not be tolerated in the school and that Henry had to be made an example of.

He was expelled and that was that. No help or advice on what to do next, with Henry’s GCSEs less than six months away. Only an instruction for Henry to collect his things and leave the premises. I was stunned, and rather than argue, I couldn’t get out of there fast enough.

Henry’s friend was expelled, too, but the girls who took and sent the photos were thought blameless. To this day I still struggle to understand that. Yes, what my son did was wrong, but it wasn’t an act of revenge, it wasn’t coercion, it was a game that went horribly wrong.

Of course, I realise the girl must have felt a sense of violation and humiliation, but she played a role, too. Let me be clear, I’m not condoning sexual transgressions against women and girls, but when young boys are involved we have to remember they are vulnerable, too. They are learning how to be sexual beings in an overly sexualised culture, in the same way girls are.

Henry’s actions may have broken the law, but I didn’t think he deserved to be labelled a criminal, and the headmaster didn’t get the police involved.

I certainly wouldn’t have reported him to officers, as Simon Bailey of the National Police Chiefs’ Council (NPCC) has suggested recently that parents should do.

With his GCSEs looming, I frantically phoned other schools to find Henry a place. Each one was understanding and a little surprised at how harshly he had been treated. Unsurprisingly, none had places at that time of the year, so my only option was a tutorial college or ‘crammer’.

Usually it’s students who have failed exams or those aiming for higher grades who attend, and there is nothing like the camaraderie found in a school. 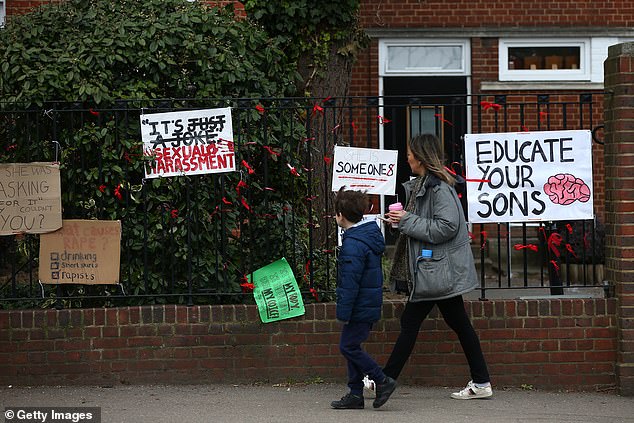 The mother said Henry was a victim of the failure of schools , the Government and social media. Pictured: Protest against male violence

It was hard for Henry to focus on his studies — the life he knew had gone. He missed his friends, he missed playing sport every day, and the lingering sense of shame and guilt just wouldn’t leave him. Seeing our once-outgoing, happy son in such turmoil was awful.

It also spelt the end of the ambitions we once had for his education. We’d always assumed he’d take A-levels and go to university, but he scraped through his GCSEs, passing six subjects. We persuaded him to continue at the crammer for his A-levels. He said he wouldn’t go to another school as he couldn’t face the past being dragged up.

Henry was so relieved when he took his A-levels and was out of the education system for good. He got a menial job at a family friend’s business, and has now branched out to work for himself. It is not what we imagined for him, and we often wonder what might have been, had he not been expelled.

Thankfully, his friends stood by him, but it took him a long while to feel confident enough to have a girlfriend, so I was delighted when he fell in love with Alice, aged 18.

He told her what had happened and she was understanding and supportive. They went their separate ways two years later and he is now with Emily, whom he adores.

I’m proud of the kind, loving and talented young man my son has become, especially as he paid such a huge price for a mistake.

I hope that any girls traumatised by an experience like this have also been able to rebuild their lives.

I believe Henry was a victim too. A victim of the failure of schools, the Government and social media to protect young people and let them grow into adulthood, safely and at their own pace.

Names and certain details have been changed to protect the identities of those involved.