‘My tattoos come from a place of insecurity’

You probably know Post Malone for two things: massive hit singles and having loads of tattoos – some on his face.

He’s been chatting about his body art in a new interview, saying his tattoos come from “a place of insecurity”.

“Where I don’t like how I look, I’m going to put something cool on there,” the rapper told GQ Magazine.

“I can look at myself and say, ‘You look cool, kid,’ and have a modicum of self-confidence when it comes to my appearance.”

And his words have rung true with other people who get tattooed to help with their self-esteem and body confidence. 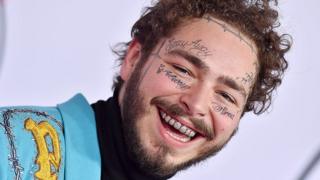 People like Jamie Rutter, who spoke to Radio 1 Newsbeat from a tattooist’s chair during a six-hour ink session.

“I feel better the more tattoos I’ve got,” the 26-year-old says.

“If you have a tattoo, someone’s looking at the artwork, they’re not looking at you.”

But rushing out to get a tattoo if you’re unhappy with how you look, or a part of your body, isn’t a recommended way of dealing with self-esteem issues in the long-term.

“People can get tattooed because they want to express something about themselves or improve their self-esteem,” says Viren Swami, a professor of social psychology at Anglia Ruskin University.

He studies body image and the motivations and impact of getting body art, primarily focusing on tattooing.

“The tattoo itself isn’t going to solve or get rid of the underlying issue that has caused the problem in the first place,” he says.

“It might be a short-term stopgap for some of the difficulties you’re experiencing and how you express them.

“But those difficulties aren’t going to suddenly disappear just because you get a tattoo.”

His research has shown an improvement in body image, in the short term, by some people who have had tattoos, but he hasn’t studied the long-term impact.

Jamie says having tattoos improves his confidence, especially when he’s wearing a T-shirt or vest – and it also invites people to start a conversation with him.

“People will say, ‘Oh, that’s really cool, why did you get it?’ and then you’ve got something to talk about instead of thinking about the size of your arms or stomach,” he says.

Maxine Stacey, 24, needed a boost to her confidence after she was hit by a bus while riding a scooter in Thailand in 2019.

“I couldn’t even see if I had ruined the tattoos I already had. I couldn’t move any part of the right side of my body,” Maxine says.

“I had more surgery back in the UK to clean it up and from there I’ve decorated my arm with tattoos to try and distract from the result of the accident.”

After her injury healed, Maxine says she wore long-sleeved clothes because she didn’t like to look at her arm and wanted to stop people asking about the scar.

“I realised I could continue what I’d already started on my arm, to distract from it and make me feel better about the whole incident,” she says.

“It made a massive difference to my confidence just to be able to look at my arm and not feel it was ugly.”

‘Getting a tattoo is the best feeling ever’

For 23-year-old Buzz Carter, one of the things he likes most about getting inked is the chance to show off his new tattoos to other people – in real life and online.

“I’ve always been a bit overweight, so I balance that out by dressing nice and having tattoos. I’ve got a beard which ties into my confidence,” he says.

“It makes me feel better to have something to show off.”

He says getting a new tattoo is “one of the best feelings ever”.

“I used to not be happy with my appearance, but they have given me confidence to properly be who I should be,” Kai says.

“I feel best about myself when I look as different as possible to everyone else.

“So, having tattoos helps me set myself apart even more.”

Professor Swami says his studies have shown the positive short-term impacts from getting a tattoo may be due to the physical and financial investment of getting something permanent marked on your body.

But he also warns that getting inked can have a negative impact on people’s personal and professional lives.

“If you get a visible tattoo, it may have an impact on your relationships with others,” he says.

“In some employment settings it may not be appropriate to get a tattoo that’s particularly visible.”

Having tattoos is not a protected characteristic under the Equality Act 2010, which means employers can make their own decisions on whether to hire people with them or not.

But his studies have shown that for most people, getting a tattoo is a positive experience – as long as you don’t expect it to solve your self-esteem issues.

“I generally don’t recommend getting getting tattooed simply as a means of tackling body image issues,” he says.

“But there is evidence to suggest that getting a tattoo does impact not just your body image, but your identity in general.”