Garment workers in Myanmar are leading the charge for pro-democracy protests, and seeking a helping hand from international fashion brands.

Since Feb. 1, a military coup in Myanmar has laid the country under siege, drawing mass protests in response to military violence, including deaths. Senior government officials have been the target of arrests — but grassroots organizers are, too.

Myanmar union leaders, many of whom are female garment workers, are being targeted for arrest for their pro-democracy stance.

“Women workers — and the unions they’ve organized — have absolutely been the backbone of the pro-democracy movement,” commented Andrew Tillett-Saks, a labor organizer working in South East Asia, in a series of social media posts documenting the scenes, including a nighttime demonstration in the industrial factory zone Hlaing Thar Yar, where candles appear to spell out the word “democracy” in a pathway. “Garment workers are building the general strike against the military coup factory by factory, and 100 percent driving the democracy movement,” Tillett-Saks added.

At the center of the movement are union leaders like Ma Moe Sandar Myint, president of the Federation of Garment Workers Myanmar (one of the largest garment worker unions in the country). She goes into hiding at night for spearheading at least 20 marches, including the organization of more than 4,000 factory workers from Yangon’s Hlaing Thar Yar Township, credited as one of the first major protests against the military coup in early February.

This would not be the first time protesters included everyday professions — teachers, students, bank officers and government workers have raised their voices — but garment worker unions have become the unofficial face of the latest protests even as, globally, garment industry workers remain unpaid for billions in canceled or suspended orders due to the pandemic.

Reaching for solidarity, the women carry signage calling out for help from brands like H&M, Inditex (Zara’s owner) and Bestseller — just some of the labels that are part of the $4.59 billion attributed to garment exports in the country, as per the European Chamber of Commerce in Myanmar. Myanmar is a top-listed apparel sourcing destination behind China, Bangladesh and Vietnam, according to reports from McKinsey & Co.

Benetton on Friday halted shipments to Myanmar until peace is restored, as reported. Meanwhile, H&M, which has around 45 direct suppliers in Myanmar, has paused shipments in the country and is one of 17 trade unions and NGOs, including Labour Behind the Label and Fashion Roundtable, which have condemned the military coup. The retailer offered a statement of solidarity: “Workers, including many in the garment industry, have gone on strike in reaction to the coup and are taking part in mass demonstrations on a daily basis. We stand in solidarity with the striking workers and the calls for a general strike,” the statement read. 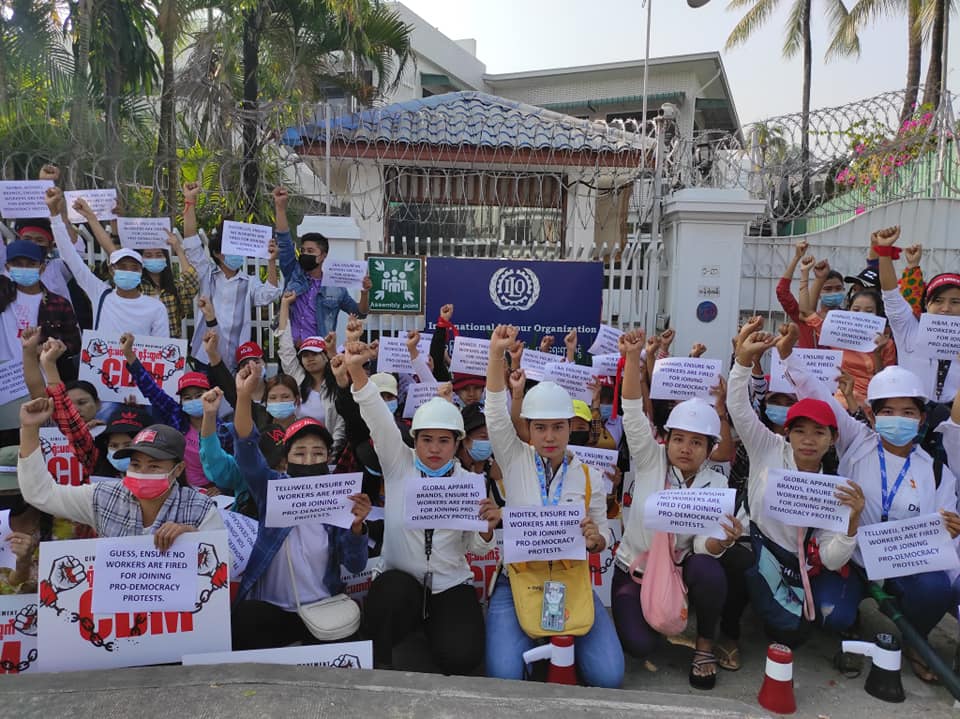