The operator of New York City's subway says it plans to spend $2.2 million a month on private security guards to address crime and quality-of-life issues in the sprawling system.

Officials at the state-run Metropolitan Transportation Authority, which oversees the subway, have been increasing the number of guards while calling on the city to provide additional police officers following assaults on staff, instances of riders being shoved from station platforms, the killing of two homeless people and a customer survey indicating rising concern about safety.

Sarah Feinberg, the MTA's interim head of subway operations, said guards were hired early in the Covid-19 pandemic, when ridership plummeted, to address crime and security issues in near-deserted stations. Their ranks swelled to 100, and by the end of this month, they are expected to have doubled to 200.

The cost for the guards is a small fraction of the authority's annual $17 billion operating budget, but a significant expense for an agency that has balanced its budget using billions of dollars of federal Covid-19 relief funds. 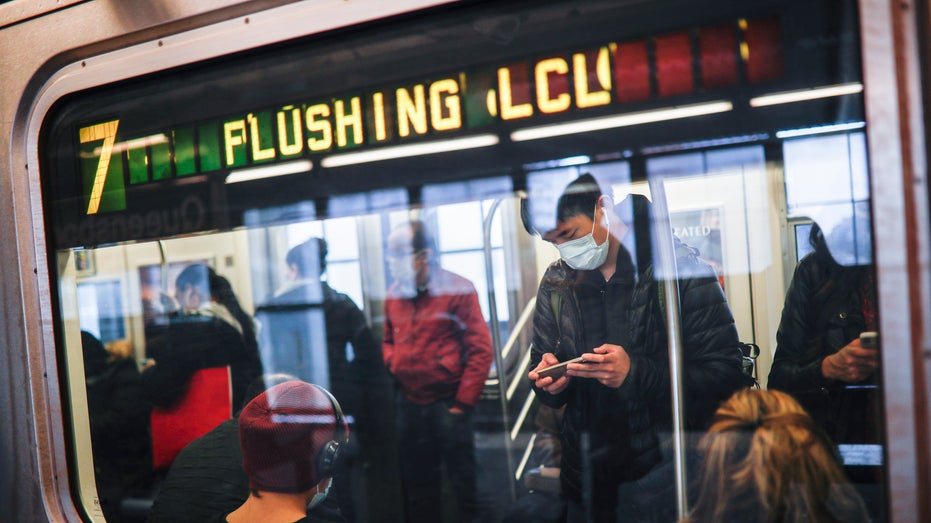 Some people wear masks while using the New York City subway system during the coronavirus pandemic in April.  (AP)

"The last thing I want to do is to devote precious resources in the middle of a financial crisis to additional security contractors," Ms. Feinberg said. "But I'm also not going to be in a position where my customers and workforce continue to feel uncomfortable and unsafe."

Ms. Feinberg said the guards provide a sense of security for riders and transit workers at the agency's 472 stations, where weekday ridership remains more than 60% below normal. Safety is essential to retain riders returning to the subway for the first time in a year, she and other MTA officials say.

DE BLASIO: ALL NYC SCHOOLS WILL BE 100% IN-PERSON IN SEPTEMBER, NO REMOTE OPTION

The guards, who aren't armed, report potential dangers, often related to homelessness, mental health and drug use, according to Ms. Feinberg. They also log instances of fare evasion, check in with station agents and other MTA workers, and liaise with MTA and New York Police Department officers.

"We want them to use their judgment and never engage if it could escalate into anything confrontational or violent," Ms. Feinberg said.

Ms. Feinberg said the guards have been most needed at stations with persistent drug, vandalism and burglary issues, or where workers have been harassed or debris has been thrown onto tracks. The stations include Harlem–125th Street station, West Fourth Street–Washington Square and 181st Street on the Eighth Avenue Line, all in Manhattan.

On a recent weekday morning, three guards were stationed at another trouble spot, 59th Street-Columbus Circle, in Midtown Manhattan. The station includes a block-long underground corridor, Turnstyle Market, populated by food vendors and stores. Ms. Feinberg said guards were needed there after the station saw a rise in homelessness, burglaries and people setting trash cans on fire.

The guards, dressed in an orange New York City Transit vest, sat at tables in the corridor set out by food vendors. They spent time walking the corridor, standing sentry outside businesses and occasionally looking at their phones.

A spokeswoman for the MTA, Abbey Collins, said: "Cellphone use, unless work related, is not permitted on the job."

Managers and owners of several businesses welcomed the guards. They said that since reopening in the fall, they had problems with homeless people loitering in the marketplace and with thefts. Lisa Ortiz, who runs a jewelry stall that opens onto the marketplace, said the guards prevent people from lying on the ground and offer a sense of security. 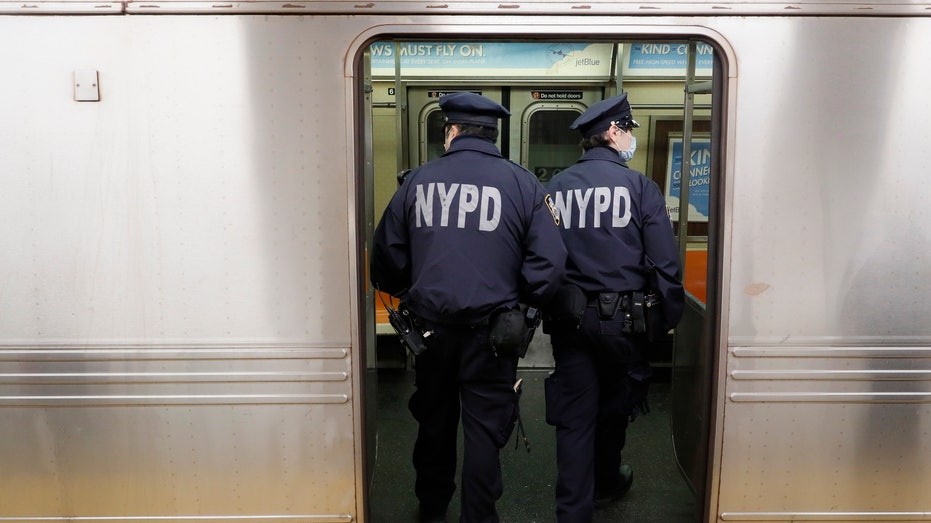 NYPD officers wake up sleeping passengers and direct them to the exits at the 207th Street A-train station, Thursday, April 30, 2020, during the coronavirus pandemic, in the Manhattan borough of New York. (AP Photo/John Minchillo)

"I have lived in New York 30 years and never seen so many crazy situations in my life," Ms. Ortiz said. "Some people are walking by very aggressive, cursing."

Ms. Feinberg said the improvements at Columbus Circle showed the guards are effective.

The New York Police Department has primary responsibility for policing the subway. New York City Mayor Bill de Blasio has for months feuded with the MTA and New York Gov. Andrew Cuomo about the safety of the system.

State officials say subway crime on a per-rider basis is high and that certain offenses, such as felony assault, are increasing. Mr. de Blasio and the NYPD's transit-police chief say data show that overall major crime numbers are low and have accused the MTA of fearmongering.

Still, Mr. de Blasio, a Democrat, recently sent hundreds of additional officers into the system on top of the 2,500 officers dedicated to transit. The MTA says it isn't enough.

A spokesman for Mr. de Blasio, Bill Neidhardt, said the city's police deployment in the subway is the highest it has been in 25 years and called on the MTA to accelerate hiring of its own police officers. "The MTA needs to pull their weight, too," he said.

The MTA says it is hiring hundreds more of its own police officers. But MTA officers also have responsibility for patrolling the authority's two commuter-rail systems. MTA officials say they deploy about 100 officers in the subway at any one time.

Ms. Feinberg said she hopes security guards are only temporary and that crime will subside as the city reopens and riders return.

"I hope this is the peak and we can wind it down," she said.