Students have continued to enrol in humanities degrees in high numbers despite fee hikes of more than 100 per cent, amid a broader surge in demand for university places this year.

But many universities cautioned it was too early to assess the impact of the federal government’s university funding reforms, which have increased fees for a range of courses while slashing the cost of science, maths, nursing and teaching degrees. 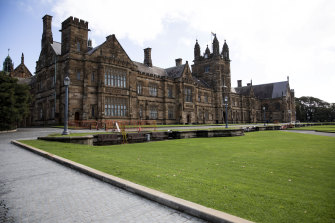 The University of Sydney said demand for places was higher than ever this year, but it was too early to assess the impact of the government’s funding reforms on students’ course preferences. Credit:Dominic Lorrimer

In NSW, there was a 10 per cent increase in the number of students who listed humanities courses as their first preference compared with last year, while demand dipped by around 5 per cent in Victoria, according to data from the states’ admission centres. In both states, more than a fifth of all applications were for humanities courses.

The University of Sydney said demand for places had been “higher than ever this year” but the impact of the changes would not been known for several years.

“Any potential changes could be related to a number of factors and we’d need to examine student enrolment choices over a much longer period (at least two to three years) to be able to begin to establish a trend,” a spokeswoman said.

University of NSW deputy vice-chancellor Merlin Crossley said there had been no noticeable reduction in enrolments in humanities courses as a result of fee increases.

“We have seen no change. We are going to be completely full in arts, business, law, science and engineering,” he said.

UNSW’s Bachelor Of Medical Studies topped the list of the state’s most popular course for 2021, while the University of Sydney’s arts and arts/law degrees ranked fifth and sixth place, unchanged from last year.

Monash University reported a “modest” increase in enrolments for STEM (science, technology, engineering and mathematics) courses, as well as an 8 per cent increase in arts degrees. RMIT declined to disclose its enrolment figures but said it had received more applications from domestic students than at the same time last year.

Swinburne University of Technology said there had been a spike in demand for many STEM-related courses, most notably its Bachelor of Computer Science and Bachelor of Health Science, while interest in its Bachelor of Arts was “comparable to other years”.

The cost of humanities and communications courses has increased by 113 per cent, with a year of full-time study costing $14,500, up from $6804 . Fees for law and commerce have increased 28 per cent to $14,500 a year, up from $11,355. A full three-year program in these disciplines will cost students about $43,500 as the government slashes its funding contribution.

Higher education experts and economists have argued there is little evidence that students pay attention to price signals when choosing what to study.

Education researcher Peter Hurley from Victoria University’s Mitchell Institute said the HECS-HELP system, which allows students to defer loans, was designed to blunt the impact of fees on decision-making.

“The nature of deferred income contingent loans is that repayment occurs well into the student’s future. This means ‘price signals’ – changing the cost to students to affect the demand for courses – have limited impact,” he said.