No excuse for Ollie Robinson tweets – but what a vindictive troll

DAN WOOTTON: There’s no excuse for the vile tweets of Ollie Robinson, the troubled teenager, but what kind of a vindictive troll tries to destroy a man on the best day of his life a decade later?

Yesterday should have been the greatest day in the life of 27-year-old Ollie Robinson.

Making his test match debut at Lords versus New Zealand, the cricketer took 2-50 on the opening day in the scorching London sun.

But while he was on the cricket field, bitter and spiteful social media scourers were digging up the Twitter history of the teenage Ollie Robinson, who has been open about his troubled past.

By the end of the day, his performance was entirely forgotten.

All that mattered was the existence of clearly inappropriate tweets he had penned for his mates as an immature teen, which were branded as sexist, racist and Islamophobic by the Thought Police.

Now no one would excuse the vile content of Ollie’s tweets at the time, which inexcusably included the use of the N-word. 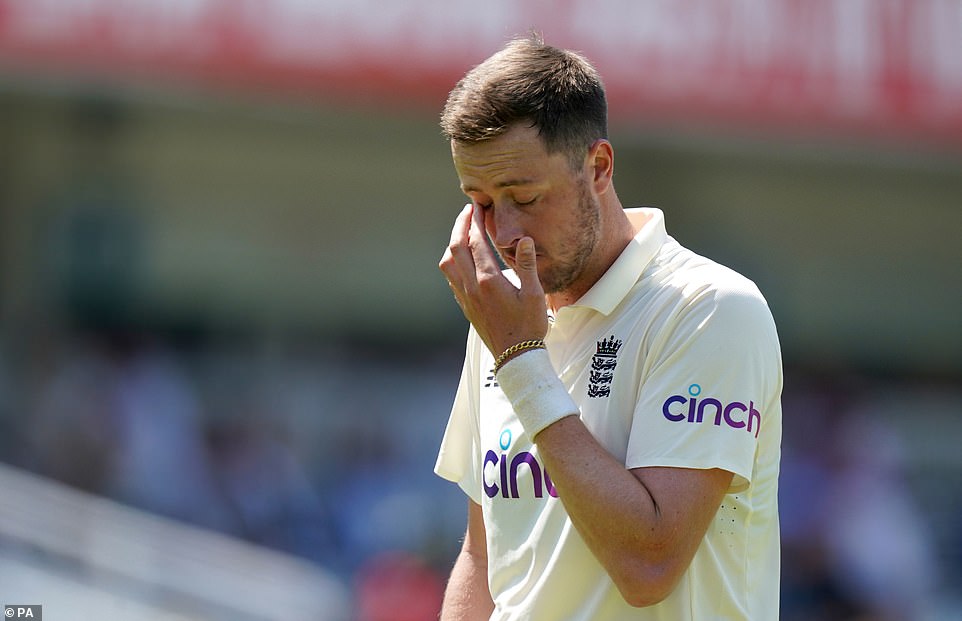 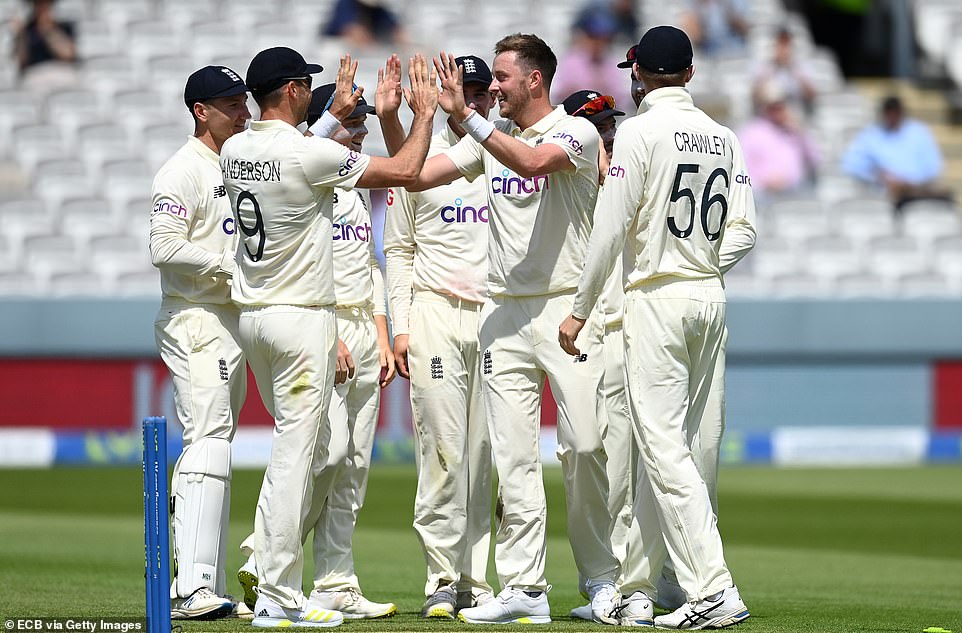 Yesterday should have been the greatest day in the life of 27-year-old Ollie Robinson. By the end of the day, his performance was entirely forgotten 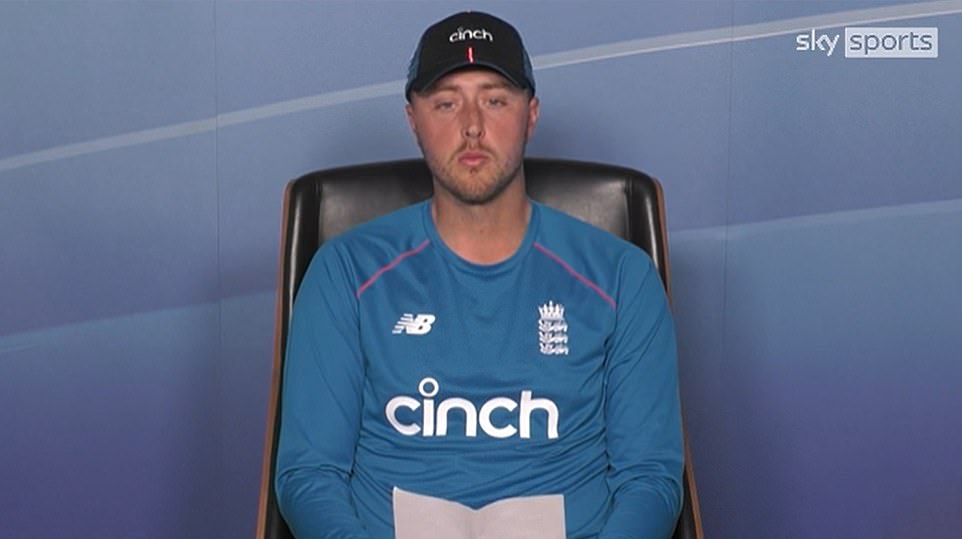 After the uproar, Robinson apologised on camera. Dragged in front of the TV cameras, he made a one minute 41 second statement, clearly drafted by cricket bosses, which looked more like a hostage video

One read: ‘My new Muslim friend is the bomb #wheeyyyyy.’

He also posted: ‘I wonder if Asian people put smileys like this ¦) #racist’

In another he said: ‘Not going to lie, a lot of girls need to learn the art of class #getsome.’

And he wrote: ‘Remind me not to watch the boxing with a girl again #notaclue #shesboredalready cares about tamara ecclestone eyebrows #outsoon.’

There’s many more like this, but you get the drift. Pretty gross, right? Indeed.

But not as gross as the culture of attempting to cancel the careers of adults for something inappropriate they tweeted when they were a troubled teenager.

Were Ollie’s tweets evidence of a racist and sexist who should be shunned from society a decade later? I genuinely don’t think so.

I’d say it was an idiotic 18-year-old aspiring sportsman, full of bravado but struggling to find his way in the world, showing off to his mates.

Remember, we used social media differently back in 2012 and Ollie was still three years away from his first-class debut.

But in the woke world of sport in 2021, there was only one solution for the ECB to deal with this situation: A humiliating public flogging.

England Cricket felt the emergence of the tweets was particularly bad timing, given all the players had worn a black t-shirt before the game emblazoned with anti-discrimination messages.

Perhaps this is why sport should stay away from constant virtue signalling – I don’t believe the gimmick of a t-shirt does anything to stop racism in sport.

But what it did do was allow critics to use Robinson’s tweets to create an utter s**t storm that will stick with him forever more.

England cricket boss Tom Robinson was quickly out in public, promising a ‘full investigation’ into the posts from 2012.

‘We have a zero-tolerance stance to any form of discrimination and there are rules in place that handle conduct of this nature… our England men’s team, alongside others from the ECB and our partners across the game, worked together today to create a moment of unity,’ he fumed.

Zero tolerance policy? The bloke was 18 and has been open about his difficulties back then – and he certainly wasn’t working for England Cricket at the time. 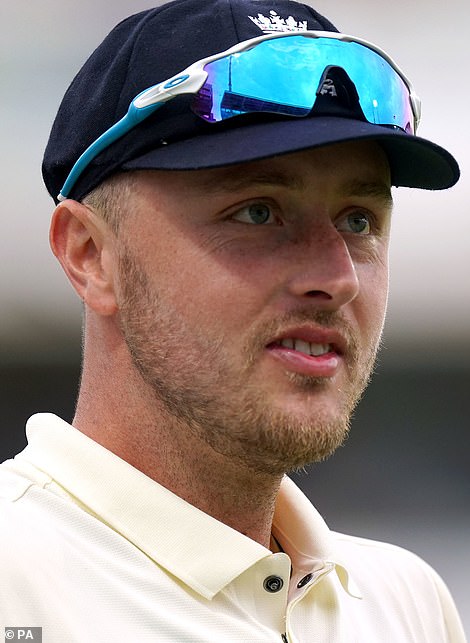 Robinson was 18 and has been open about his difficulties back then. He said in his apology: ‘I will continue to educate myself, look for advice and work with the support network that is available to me to learn more about getting better in this area.’ For me, that’s all this poor bloke should ever have had to say

More to the point, no teen back then thought they were publishing material that could impact their future career; they were having the sorts of juvenile and puerile conversations with their mates that are now the domain of WhatsApp groups.

I’d much prefer to focus on the words of the cricketer Moin Ashraf who tweeted: ‘As an ex-teammate of Ollie Robinson’s in the Yorkshire set up, having roomed, shared the field and gone out for dinners and socials with him, I know full well he isn’t a racist. Yes, the remarks were inexcusable and irresponsible. He’s apologised. We should forgive, and move on.’

But, by this point, with the Twitter mob out in full force, only ritual humiliation was going to save Robinson’s career.

Dragged in front of the TV cameras, he made a one minute 41 second statement, clearly drafted by cricket bosses, which looked more like a hostage video.

‘I don’t want something that happened eight years ago to diminish the efforts of my team-mates and the ECB as they continue to build meaningful action with their comprehensive initiatives and efforts, which I fully endorse and support,’ he read awkwardly.

‘I will continue to educate myself, look for advice and work with the support network that is available to me to learn more about getting better in this area.’

It was only when he stopped parroting the pre-prepared statement that we got to hear the real man, when he summed up the situation perfectly by saying: ‘I was young and naïve and I regret that.’

For me, that’s all this poor bloke should ever have had to say.

Who is scrolling through someone’s entire tweets seeking out a reason to cancel someone, anyway?

When I was involved in a high profile court case against Johnny Depp last year, his fans used to try and whip up controversy over something I’d tweeted that was a little bit spiky about X Factor in 2010.

That was the best they could find because the entire time I’ve been on social media has been in a professional capacity working in the media.

But if Twitter had been invented when I was at high school, I shudder to think what they could have dug up. 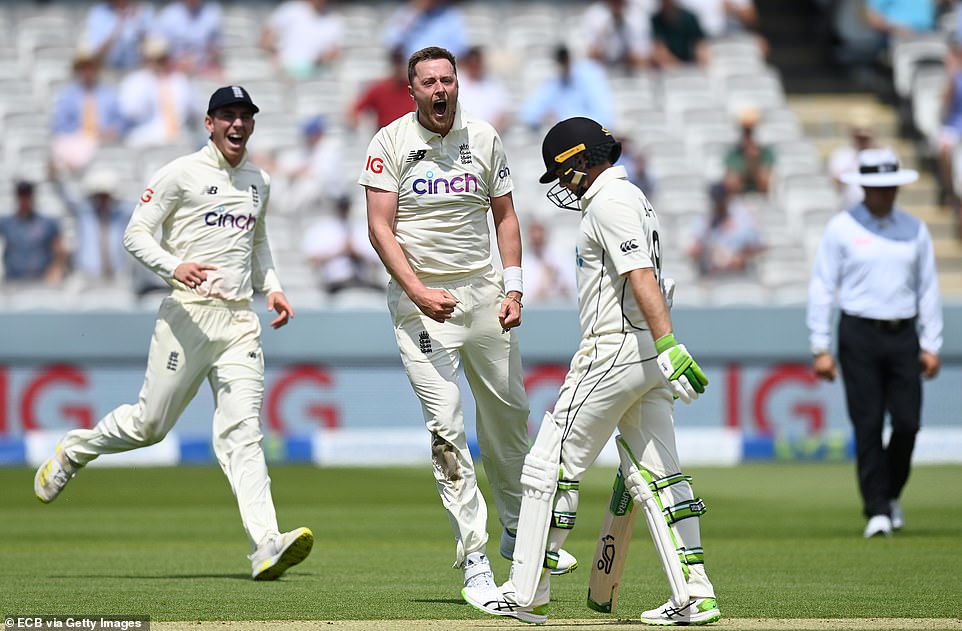 As far as I am concerned, Ollie Robinson is uncancelled. He made a juvenile mistake that overshadowed what should have been his proudest day

It doesn’t matter how intelligent you might have been, the vast majority of us didn’t have correct judgement to make decisions that would impact the rest of our lives.

Last night’s booing of the moment England took the knee before its victory against Austria shows just how fed up football fans are of being preached to consistently when they’re trying to enjoy their favourite game.

Manager Gareth Southgate said the jeering represented ‘criticism’ of England’s black players, even though it ended up being drowned out by applause.

Absolutely not. What it represented was the fact most Brits feel it’s time to move on from the acrimony of last summer and look forward to a united future.

What on earth has happened to our sportsmen? It feels like they’ve become even woker than the luvvies?

So as far as I am concerned, Ollie Robinson is uncancelled.

He made a juvenile mistake that overshadowed what should have been his proudest day.

Let’s move the hell on and stop trying to destroy high profile people for utterances they made as naive teenagers.