Australia will not buy the Johnson & Johnson COVID-19 vaccine to boost the nation’s immunisation arsenal because it is too similar to the AstraZeneca drug, but Prime Minister Scott Morrison says he hopes the majority of the population will be immunised by the end of the year.

Health Minister Greg Hunt’s office confirmed on Monday the federal government would not purchase the Johnson & Johnson/Janssen vaccine to boost supplies as it is the same type of vaccine as the AstraZeneca drug, which is being manufactured locally. 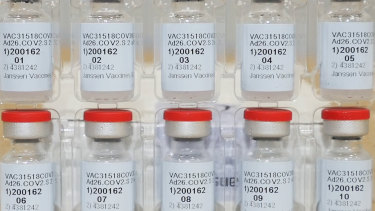 Australia will not be signing an agreement for the Johnson & Johnson/Janssen vaccine in the near future.

Johnson & Johnson also confirmed it required a no-fault compensation scheme before it would sell vaccines to Australia, which the government has not committed to introducing.

Last week the government said it was still in talks with Johnson & Johnson to buy the Janssen vaccine, but on Monday a spokesperson for Mr Hunt said there was no plan at this stage.

“The Janssen vaccine is an adenovirus vaccine, the same type of vaccine as the AstraZeneca vaccine. The government does not intend to purchase any further adenovirus vaccines at this time,” the spokesperson said.

Experts and peak medical bodies say regardless of which vaccines are bought the country is overdue for a no-fault compensation scheme, especially given the importance of vaccinating the community against COVID-19.

A no-fault compensation scheme would allow patients to receive redress for a vaccine injury from the government, without having to go through the courts. The UK, US, New Zealand, Canada, the Philippines and Brazil are among the 25 countries that have existing no-fault schemes.

Australia has significantly missed its initial vaccination targets due to supply issues and concerns about rare but serious side effects linked to the AstraZeneca vaccine, meaning it’s no longer the cornerstone of the nation’s rollout.

The country is relying on a further 20 million doses of Pfizer to rescue the program.

A Janssen ANZ spokeswoman said the company would not comment on contractual negotiations, but it had taken a consistent approach to advance purchase agreements.

“The availability of our vaccine candidate is subject to successful development, regulatory approval as well as the existence of an efficient, effective no-fault compensation system and robust liability protection,” she said.

Last week, the Australian Technical Advisory Group on Immunisation updated its advice on COVID-19 vaccines, saying Pfizer was the preferred shot for people aged under 50 after a rare clotting disorder was linked to some patients following their first dose of AstraZeneca.

The government has ordered a further 20 million Pfizer doses in response, requiring an overhaul of the country’s vaccination program. That also means the country may not be vaccinated by the end of the year, the Prime Minister conceded on Sunday.

As of Sunday evening, nearly 1.2 million doses of COVID-19 vaccines had been administered. Mr Morrison said the program has continued to ramp up.

“In the first six weeks over that period of time we’ve gone from around 30,000 a week to over 300,000 a week, and that number continues to go on,” he said in a Facebook video on Monday afternoon.

Mr Morrison said the focus of phase 1 of the rollout is on ensuring the vulnerable and elderly, as well as critical frontline workers, were all vaccinated ahead of the worst of winter.

“We hope to be able to move into the balance of the population as we get into the second half of the year,” he said.

Chief Medical Officer Professor Paul Kelly said it was too early to say how much of an impact the switch to Pfizer for under 50s has had on the rollout.

“We will be looking closely and carefully at what influence that AstraZeneca announcement will make in relation to those numbers through the week,” he said on Monday afternoon. “There is certainly a lot of people still wanting to get that vaccine.”

“The Department of Health has been discussing with insurers and the medical profession whether additional indemnity protection may be required for the COVID-19 vaccination program. Those discussions are ongoing,” the spokesperson said.

But Medicines Australia chief executive Liz de Somer said those indemnity schemes probably don’t take into account a mass population and large vaccine program like this, while no-fault schemes were essentially for patients.

“A no fault compensation scheme provides compensation to the patients without them having to prove through a legal process that someone is at fault,” she said.

“Where there is no negligence … Then a patient does not have to sue their doctor, prescriber or pharmacist nurse or the manufacturer in order to receive compensation for that injury.”

Australia was far behind the rest of the world when it came to having such a scheme, Chief executive of Public Health Australia Terry Slevin said.

“There’s 25 jurisdictions around the world that have a no-fault vaccine injury compensation scheme, Australia should be one of them,” he said.

Mr Slevin said it was about justice, particularly if the government was asking the community to do the right thing and get vaccinated in order to help protect the country.

“Such a program will add to people’s confidence not only in the COVID vaccine rollout process, but all vaccine programs.”

Associate Professor Nick Wood, a clinical vaccine specialist at The Children’s Hospital at Westmead and University of Sydney, said Australia was overdue for a vaccine injury compensation scheme.

“We should have had one before even COVID,” he said, adding Australia already collected the data on vaccine injuries so it would simply be a matter of finding funding for a scheme.

“We’ve got all the architecture there to implement a system,” he said.

Opposition health spokesman Mark Butler said the government needed to be clear on what the new targets were for the vaccine rollout.

“Australians need to know how this is progressing. They need to have economic confidence [in] getting their businesses up and running, getting jobs going again, being able to travel first of all within Australia and then ultimately overseas as well,” he said on Monday afternoon.

Get our Coronavirus Update newsletter

Stay across the news you need to know related to the pandemic. Sent Monday and Thursday. Sign up here.