Here’s the inside scoop on TikTok’s “dry scooping” challenge: It’s not for the faint of heart.

In fact, the death-defying trend that prompts participants to ingest a mound of undiluted supplemental energy powder caused 20-year-old stripper and OnlyFans star, Briatney Portillo, to suffer a heart attack.

“I never thought something like this would ever happen to me. Especially because I’m so young,” Portillo told The Post.

And while she was in the middle of having the heart attack in April, first responders didn’t think she was in cardiac arrest either.

“The cops and EMTs were like, ‘Maybe it’s just anxiety because you’re about to dance,’” recalled Portillo, who’s worked as a stripper for more than a year.

Because of her age and profession, emergency medical techs initially assumed she was merely experiencing an anxiety attack sparked by the pressures of having to undress in front of strangers for money.

“But I don’t have anxiety about dancing,” she added. “At the time, I wasn’t sure what my body was going through but I knew something was way off.”

After weeks of watching digital fitness influencers swallow heaping tablespoons of pre-workout — a non-Food and Drug Administration regulated, caffeinated substance that athletes typically mix with water and drink before exercising in order to improve their endurance, stamina and focus — Portillo decided to give it a try.

“A lot of body builders on TikTok were doing it and I thought, ‘If they can do it, so can I,’” the Bronx native explained.

The recent “dry scooping” mania is reminiscent of the once-viral “cinnamon challenge” craze of 2012, which saw thousands of YouTubers film themselves eating a spoonful of ground cinnamon in under 60 seconds sans water.

At its peak, that challenge — which claimed the life of a 4-year-old boy in Kentucky — amassed over 70,000 social-media mentions a day.

But for Portillo, who exercises on a weekly basis, the prospect of garnering online popularity wasn’t her motivation for attempting the dry-scoop trend.

“It wasn’t for clout,” the exotic dancer insisted. “I didn’t even record myself doing it. I just wanted energy to work out.”

But after a male friend at the gym offered her a scoop of Redcon1’s Total War pre-workout powder, she immediately regretted dumping a performance-enhancing powder down her throat without water.

“Right away I felt like I was suffocating,” she said. “I couldn’t breathe.”

For optimal results, Redcon1 suggests taking one scoop of their Total War pre-workout 30 minutes prior to strength training with 4-6 ounces of water, per the company’s website. One scoop contains about 350 milligrams of caffeine and a plethora of amino acids meant to bolster energy.

“That’s just about the equivalent of drinking four cups of regular coffee all at once,” George Fernaine, chief of cardiology at NYU Langone—Brooklyn, told The Post. “That acute, large intake of caffeine mixed with an activity that stresses the heart, like exercise, could be very dangerous.”

Redcon1 did not immediately respond to The Post’s request for comment.

“I was coughing a lot,” Portillo said of the after effects. “I started chugging some water but my throat was just extremely dry and my gums were burning.”

Once the choking episode subsided, she began her typical leg-day workout, doing several reps of deadlift, squats and hip thrusts with 60-pound weights.

But then, “my whole body started itching, I started sweating profusely and I felt nauseous,” Portillo said, adding that she didn’t notice a boost in energy or strength despite taking a concentrated gulp of the pre-workout.

She shrugged off the “weird” sensations hoping they’d eventually dissipate.

However, as she was preparing to take center stage at the strip club a few hours after leaving the gym, Portillo began experiencing chest pains.

“My chest felt very tight and heavy, I started sweating a lot again and the whole left side of my body hurt so bad,” she said.

After being rushed to the hospital in an ambulance, doctors conducted blood tests and an EKG scan. They determined that Portillo had suffered an NSTEMI heart attack.

The minor cardiac episode — which, in her case, was caused by a caffeine overdose — is typically non-life-threatening.

“I called my mom and she was freaking out more than me,” Portillo said. “I just felt so stupid for doing that dumb challenge and ending up in a hospital bed.”

Medical professionals put her on an intravenous heparin drip to thin her blood, and kept her overnight for observation. 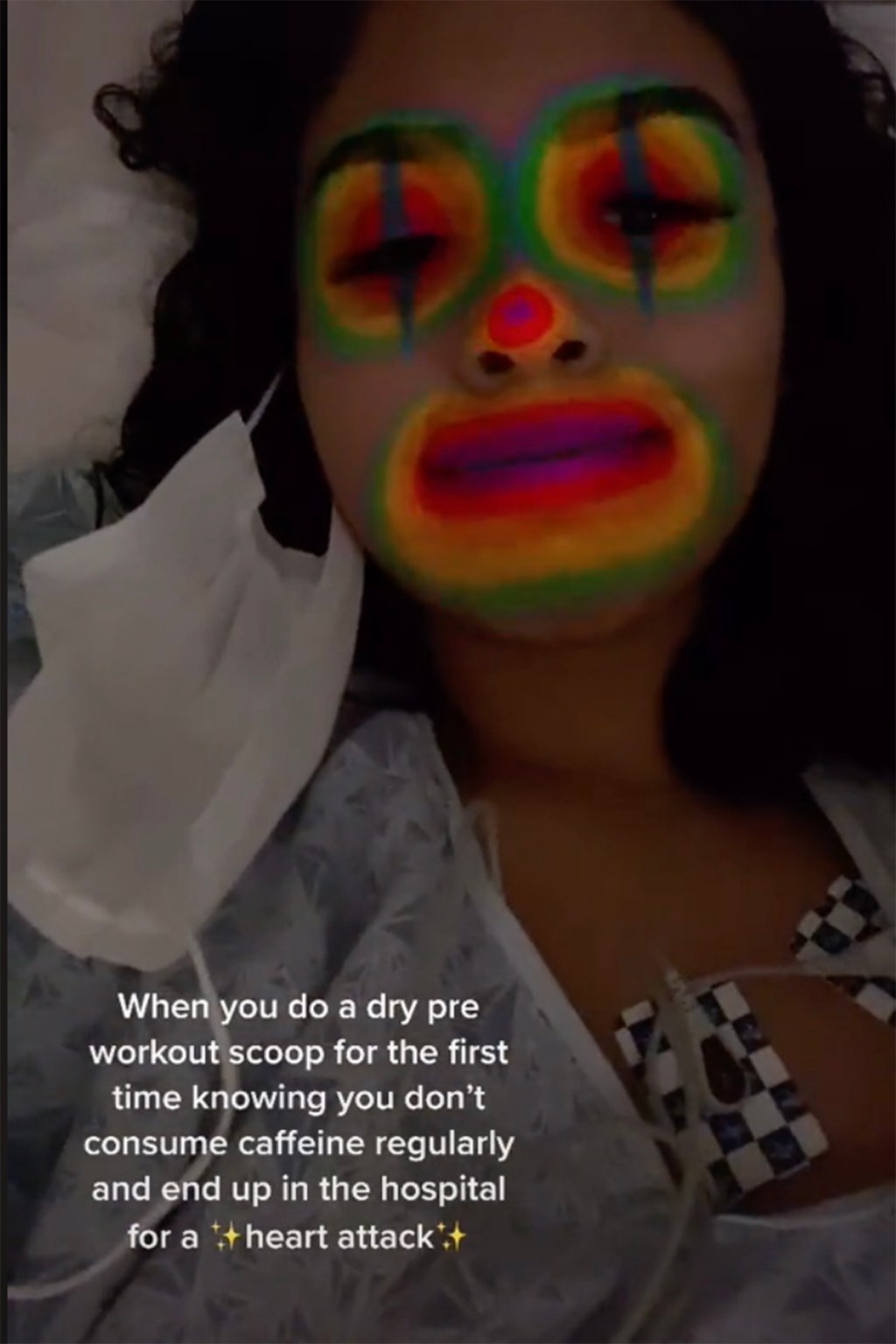 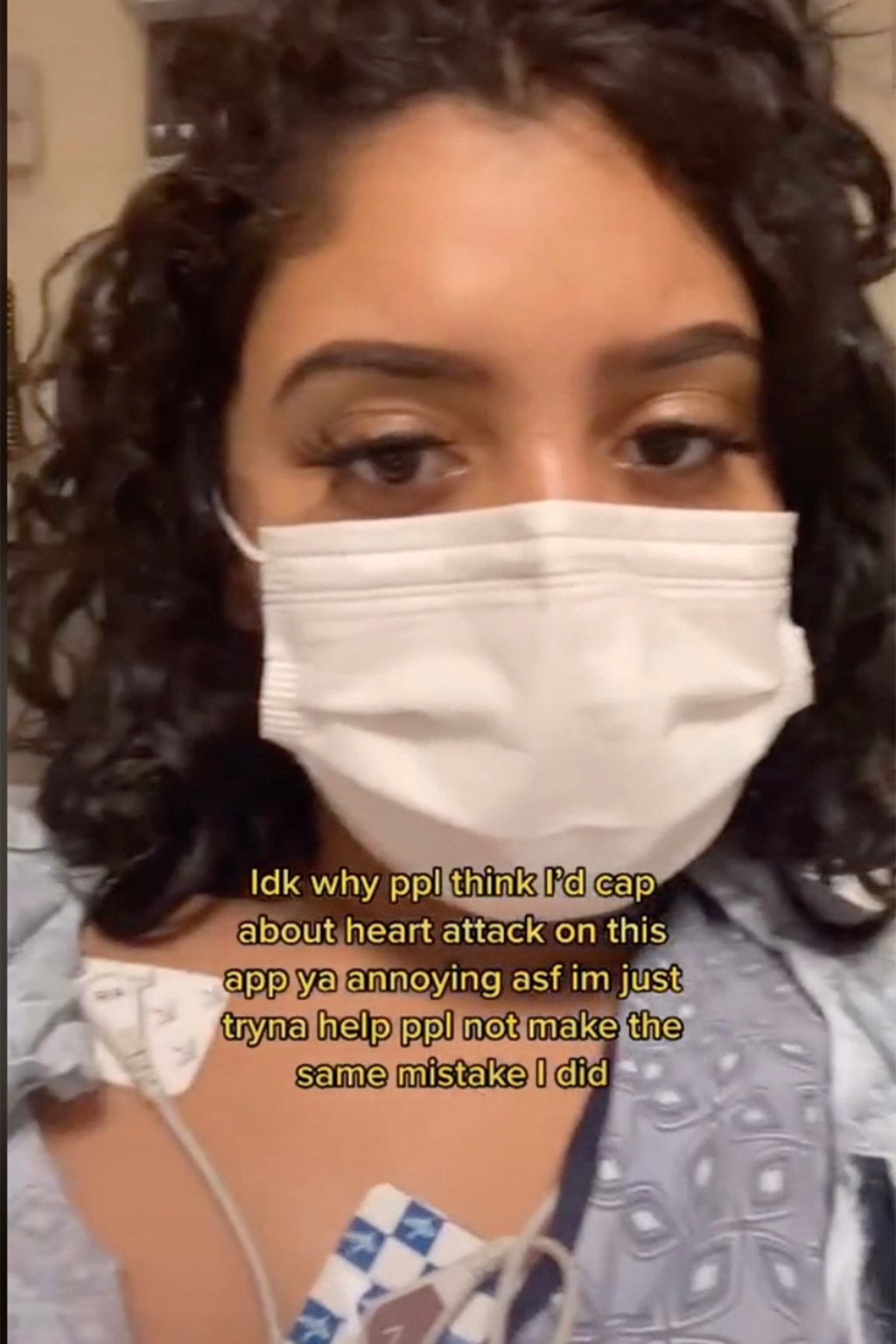