For car enthusiasts, driving is about more than just the technical specifics. Open Road explores not just what these cars do, but what they mean. Whether it’s an old, new, or exotic model, HYPEBEAST is looking beyond the stats to unpack the simple pleasures of automotive.

The Land Rover Defender is a British institution. Officially launched in 1948, the original Series I became a staple of the British Army. For the next 67 years, the Defender was the undisputed benchmark for 4x4s. In its lifetime, the car barely changed, except for a few engine introductions and contemporary production updates. It didn’t stop Land Rover from selling over two million of them before the “old” Defender was axed in 2016. Irrefutably, a tall order is in store for the “new” 2021 Defender.

At first glance, purists may want to look away. They’re going to shun the retro-futuristic looks as too ‘try-hard’ and will loathe the sporty touches littered throughout its design. It’s a challenging time, too, to launch a new British V8-powered 4×4, in the midst of the U.K.’s worst petrol crisis in decades. But for those who can respect evolution, there’s a lot to love.1 of 3 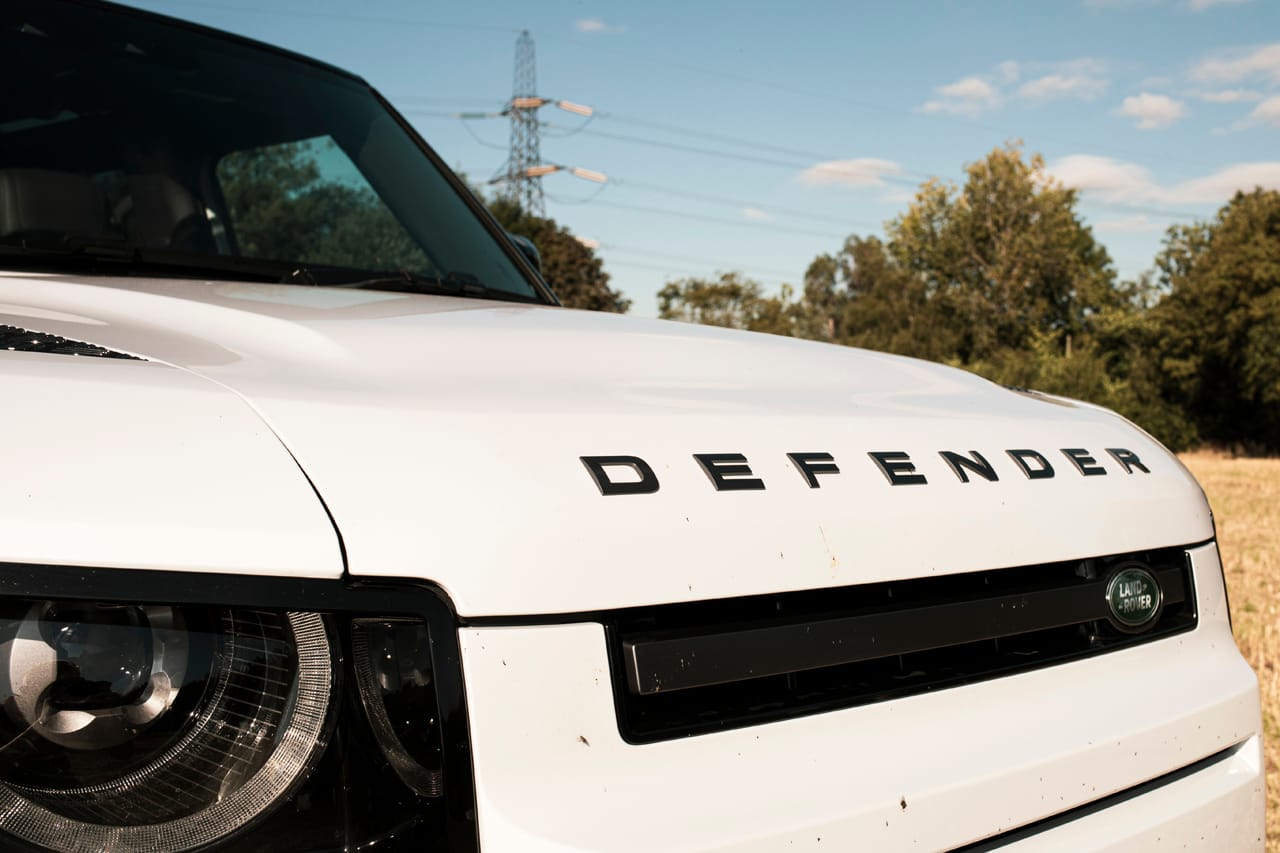 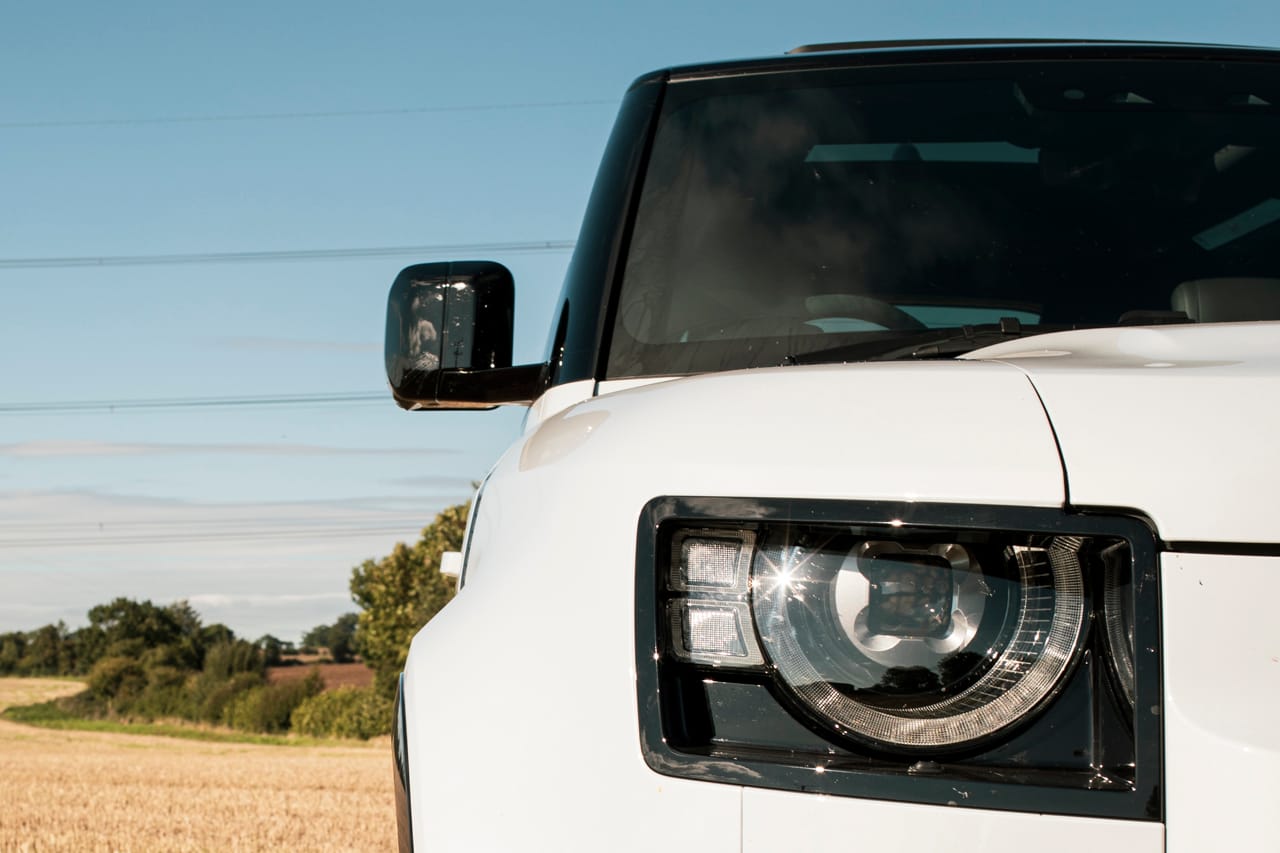 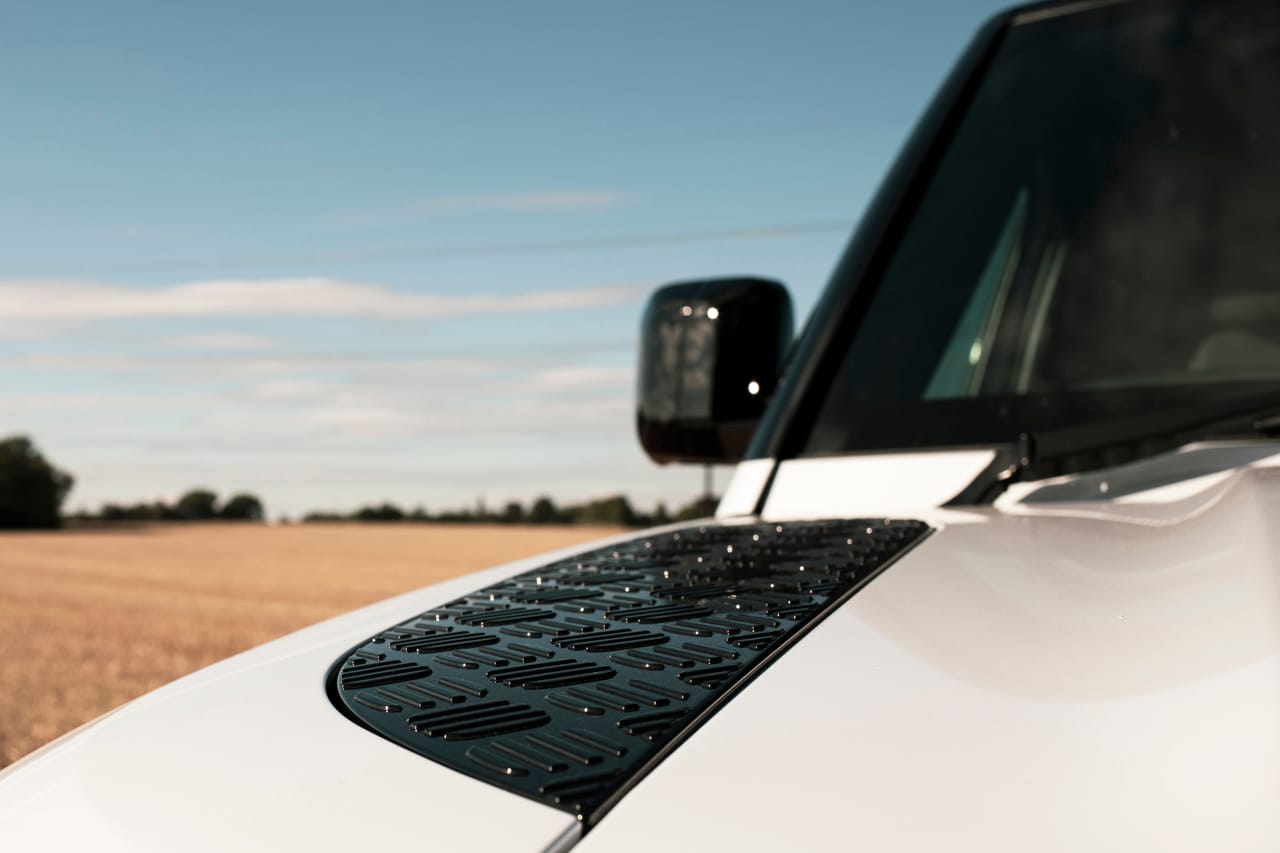 In three words, the Defender 90 V8 is imposing, refined, and familiar. Imposing because of the sheer size of the thing: barrelling down the motorway, let alone a remote country backroad, immediately reminds you which car you’re driving. A subtle growl from the V8 doesn’t bark like Jaguar-Land Rover’s SVR counterparts, but you’re always aware of the supercharger-enhanced 518 HP is there, potently and intoxicatingly at your disposal with the tilt of a toe.

‘Refined’ is a less obvious descriptor, especially at first sight of the car. But the driver’s position, which is reminiscent of the classic Defender as you sit high above everything else on the road, is akin to feeling like the king of the road. Aside from this, a liberal amount of Alcantara, leather, and hard-wearing materials combine for an interior reminiscent of the past but worthy of its $98,550 USD base price. But what shocks the most is the refinement of the overall experience — while you’re constantly aware of the power that lies beneath, you’re unable to hear exactly what’s happening outside, partly because it features one of the best bass-centric stereos ever fitted to a car.1 of 8 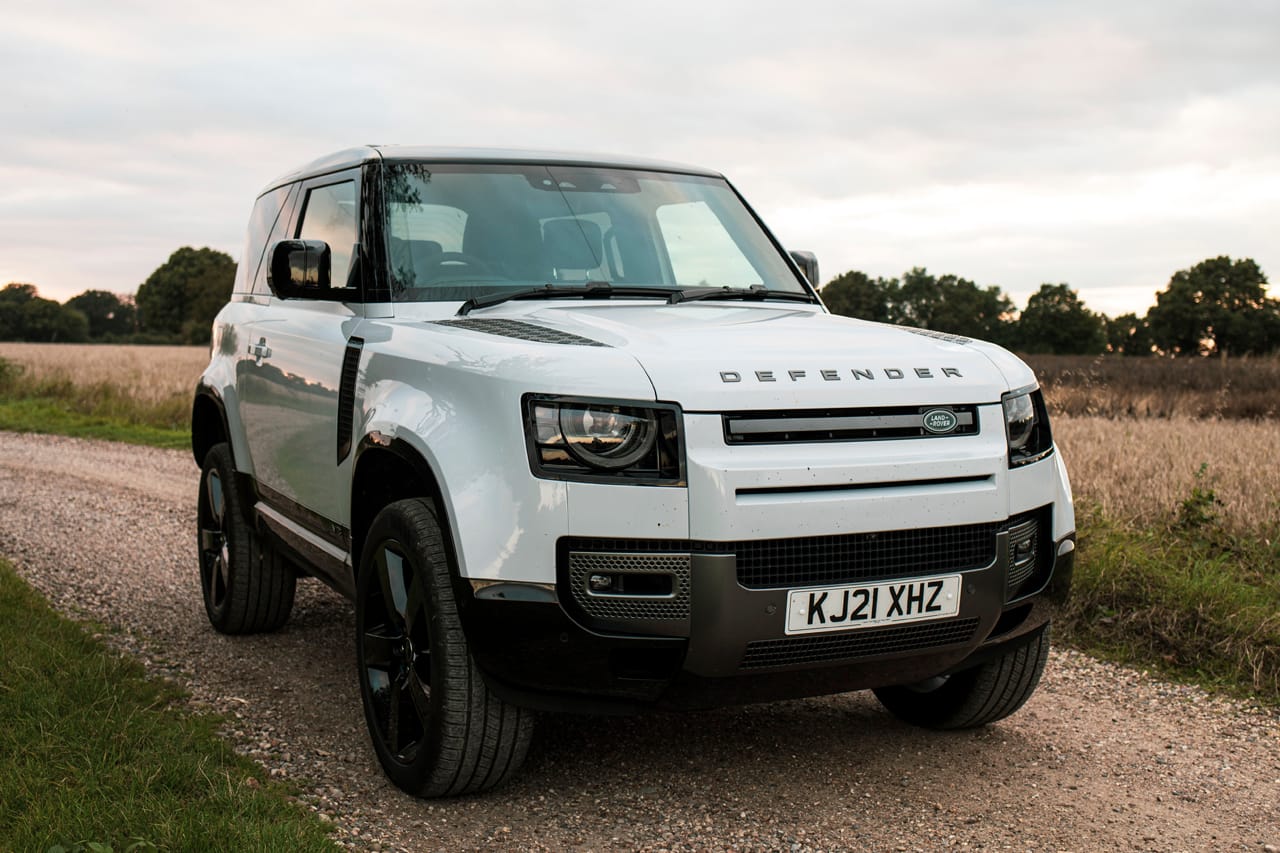 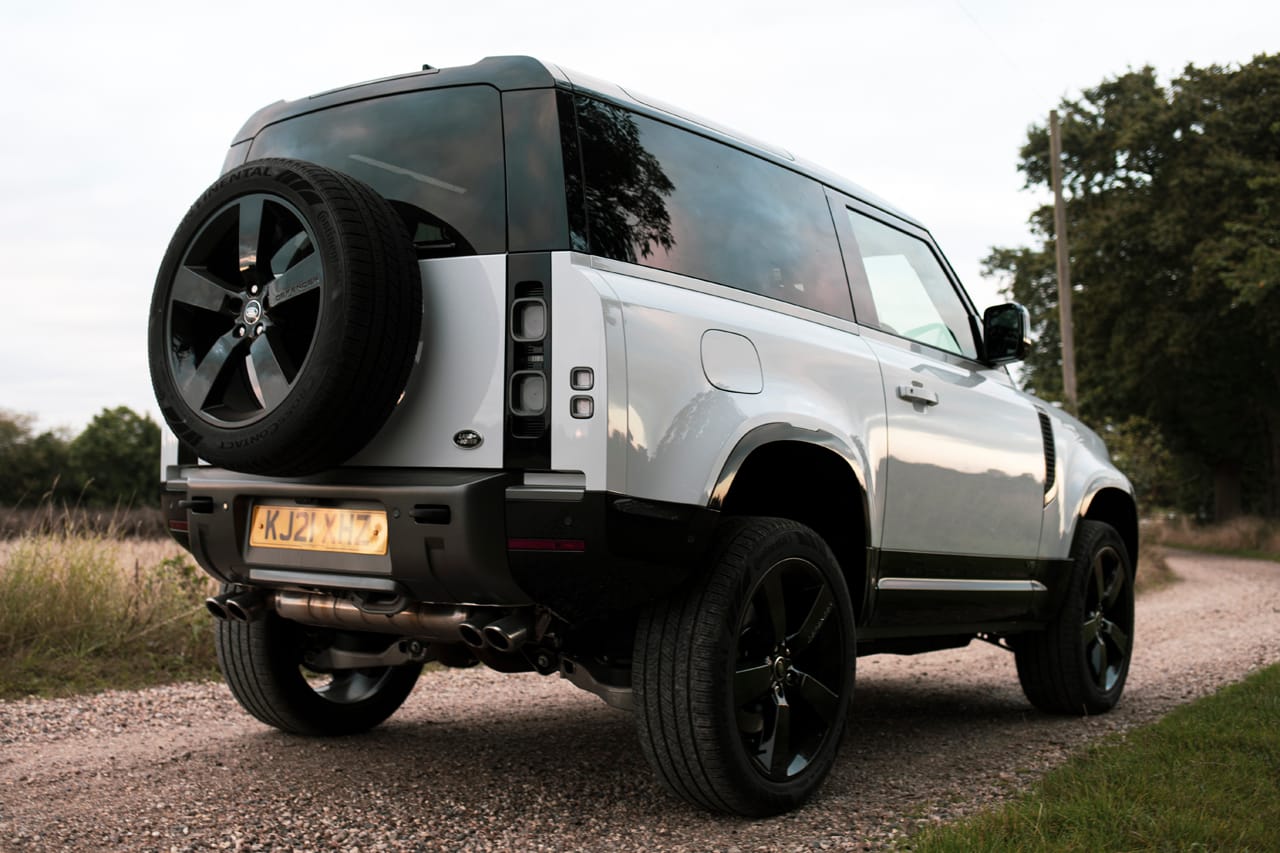 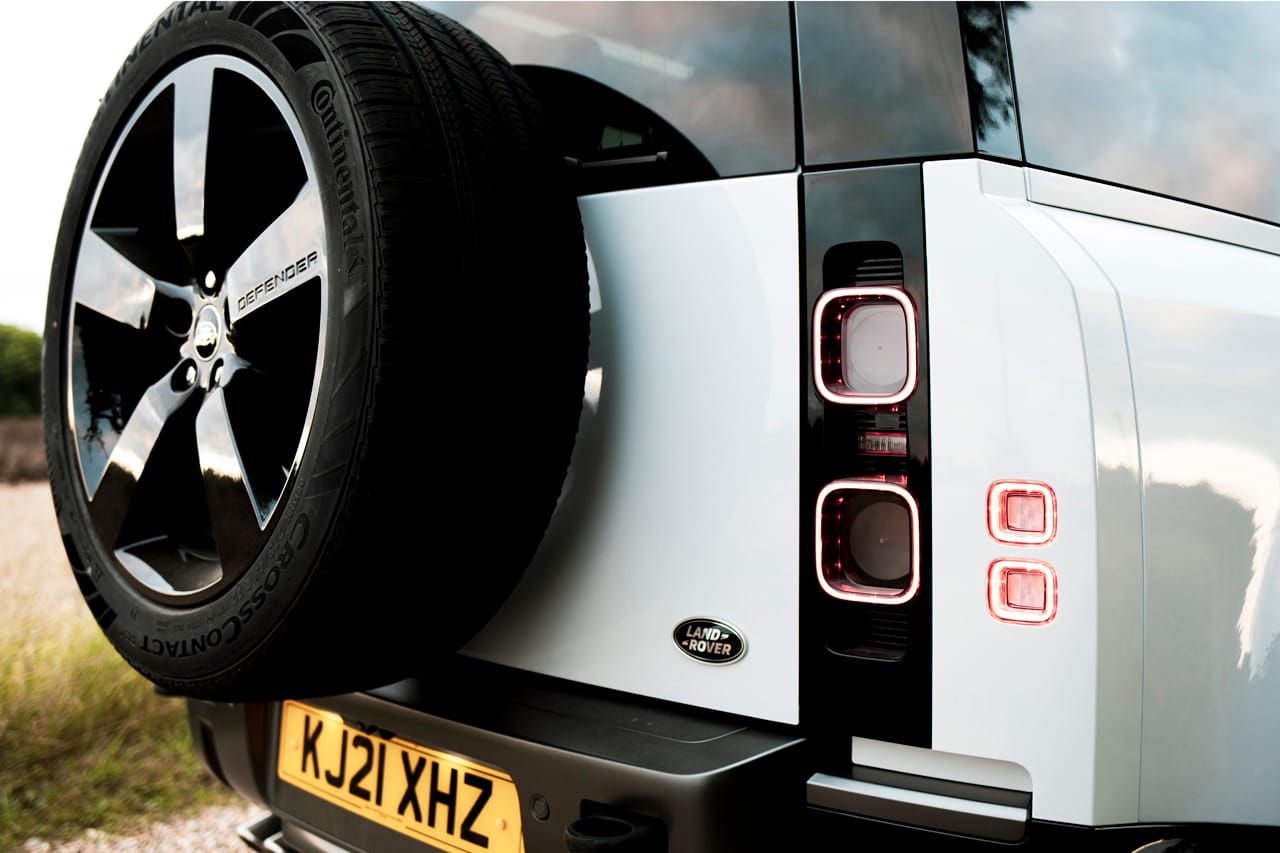 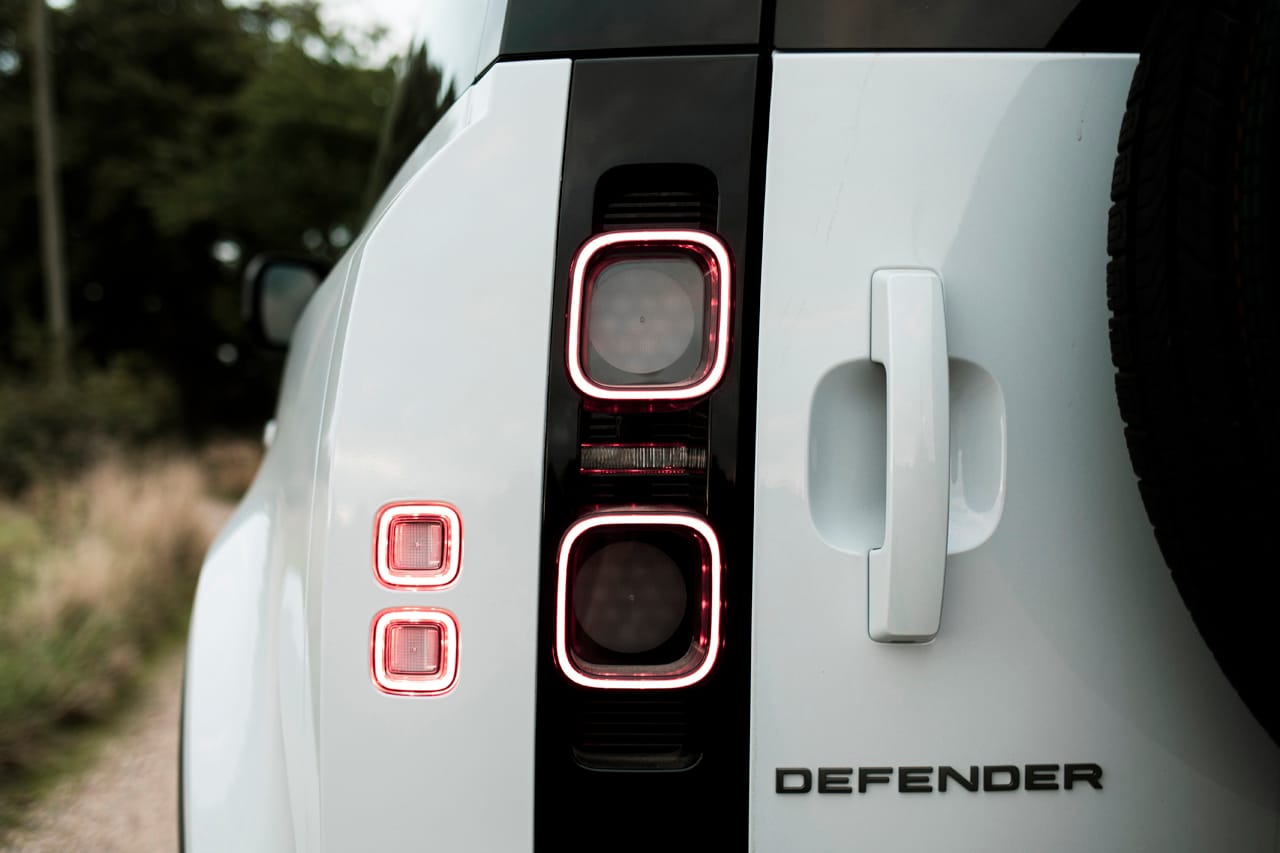 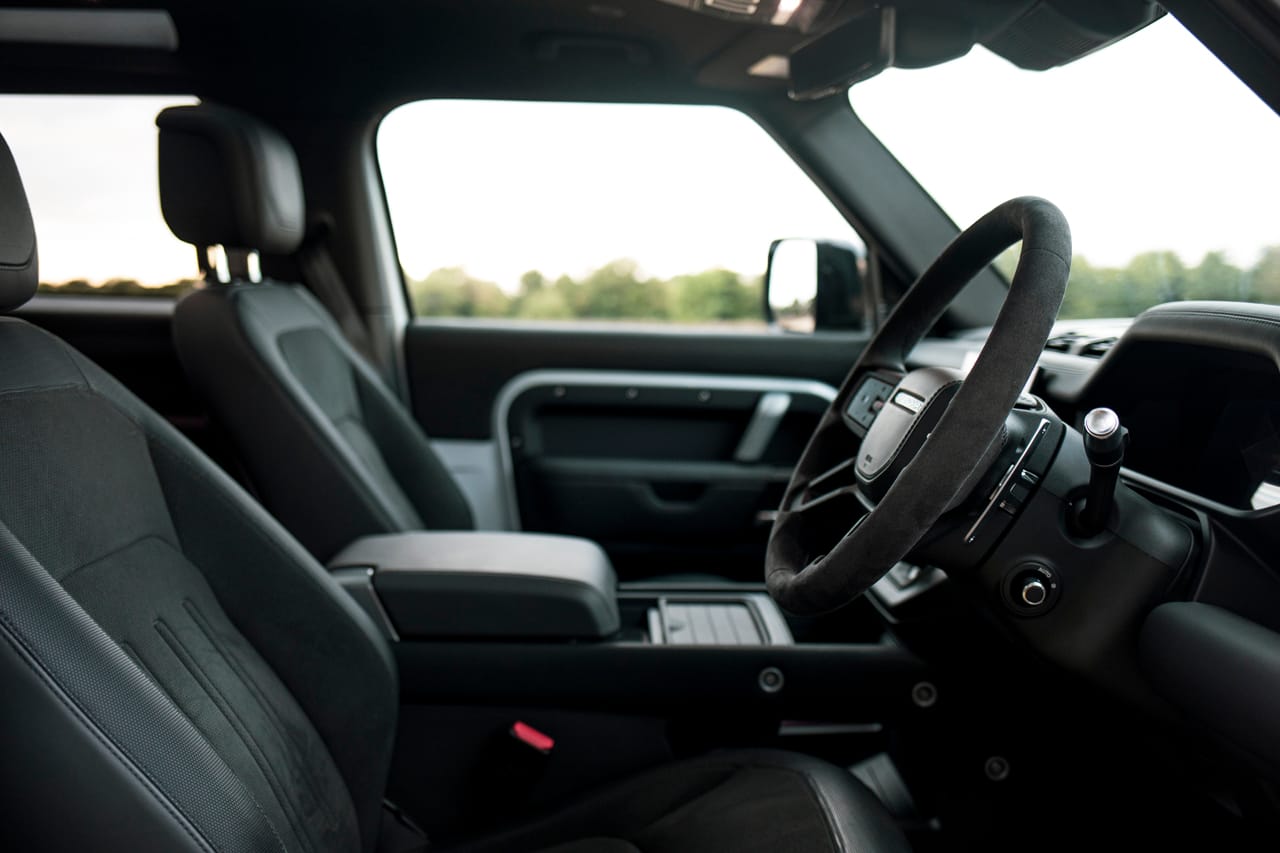 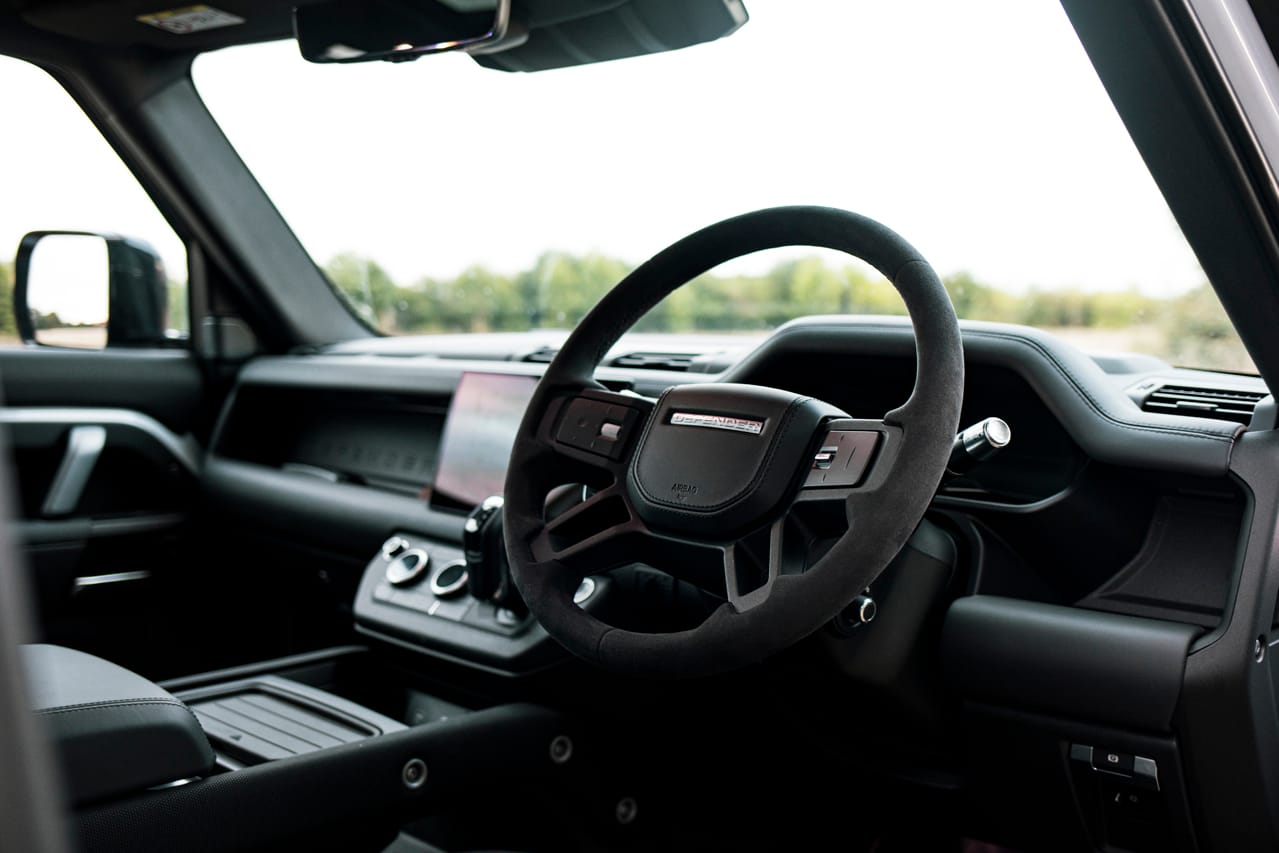 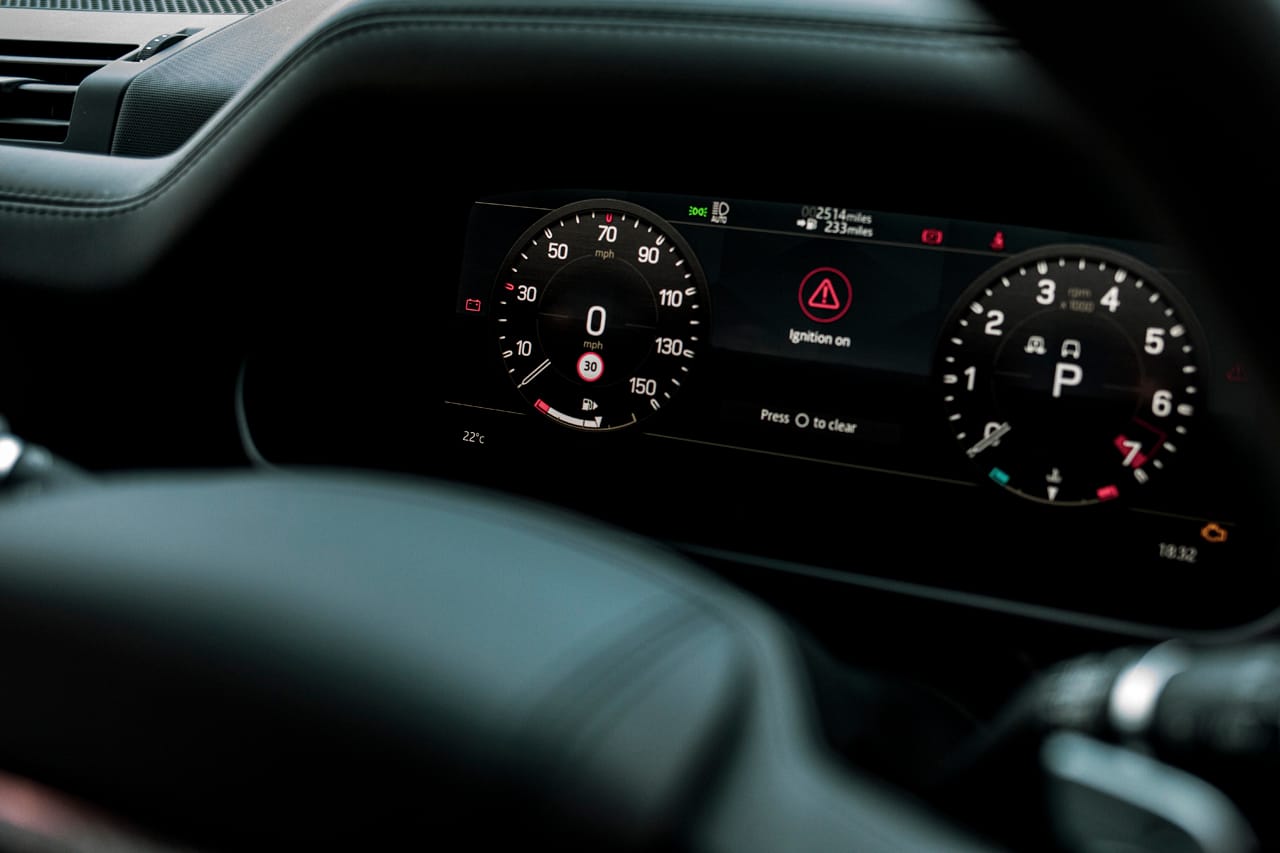 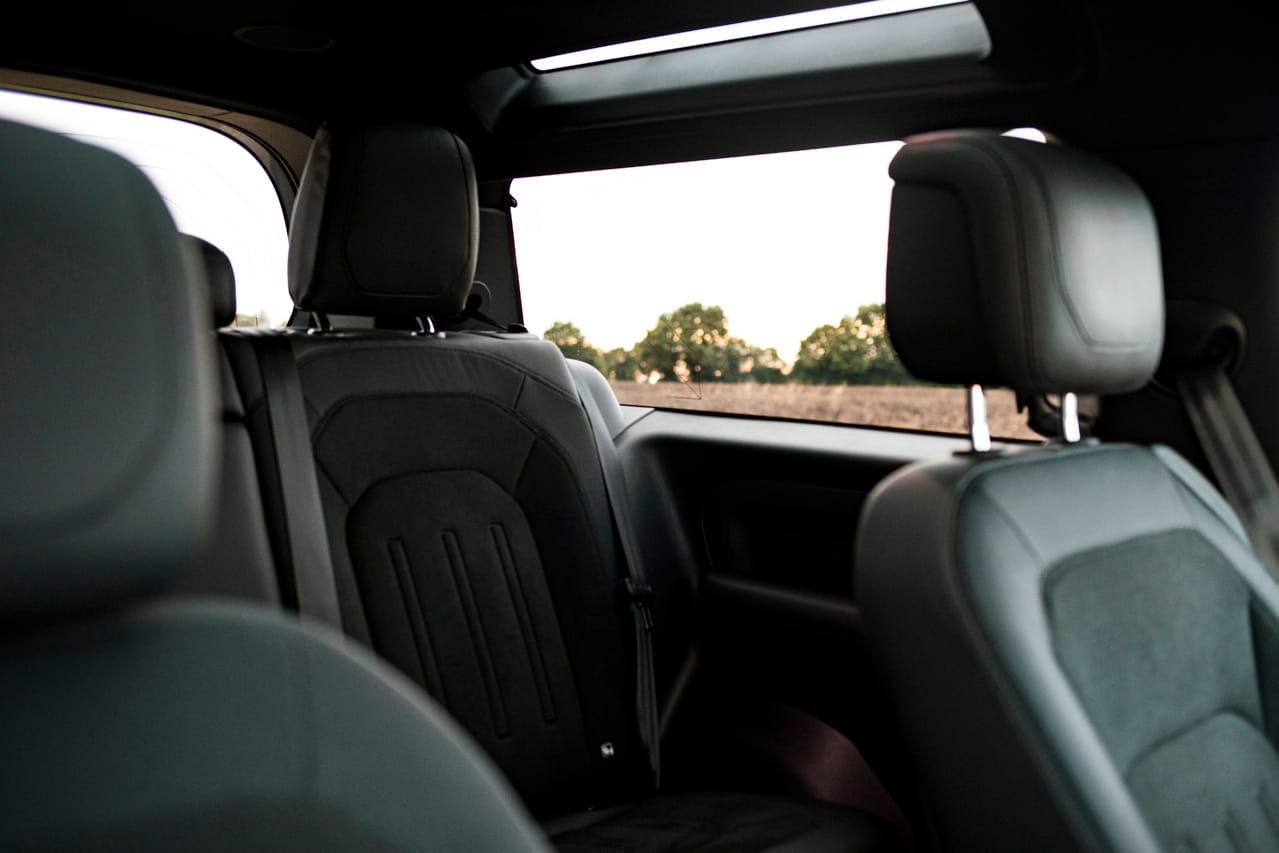 Yet there’s a comforting familiarity to the model, too. Despite luxurious and extravagant features such as the infotainment system, 22-inch rims, quad tailpipes, and even a cooling armrest compartment and a heated steering wheel, the Defender V8 is plenty capable of keeping up with its father offroad. To say it coped with new environments would be an understatement: with the air suspension raised, off-road mode was deployed, and it could easily blast down a field, wade through small ponds, descend the steepest of hills, and drive off without making any fuss, before switching back to performance-focused road mode.

After spending 20 minutes in the car, you begin to realize how everything comes together. If you want to feel indestructible, in charge, present, but don’t want to look like a road-hogging show-off, the Land Rover Defender 90 V8 could be for you. There’s no other car that encourages you to go offroad quite like this; all the buttons and systems inside glare at you daring you to press them and see what happens. 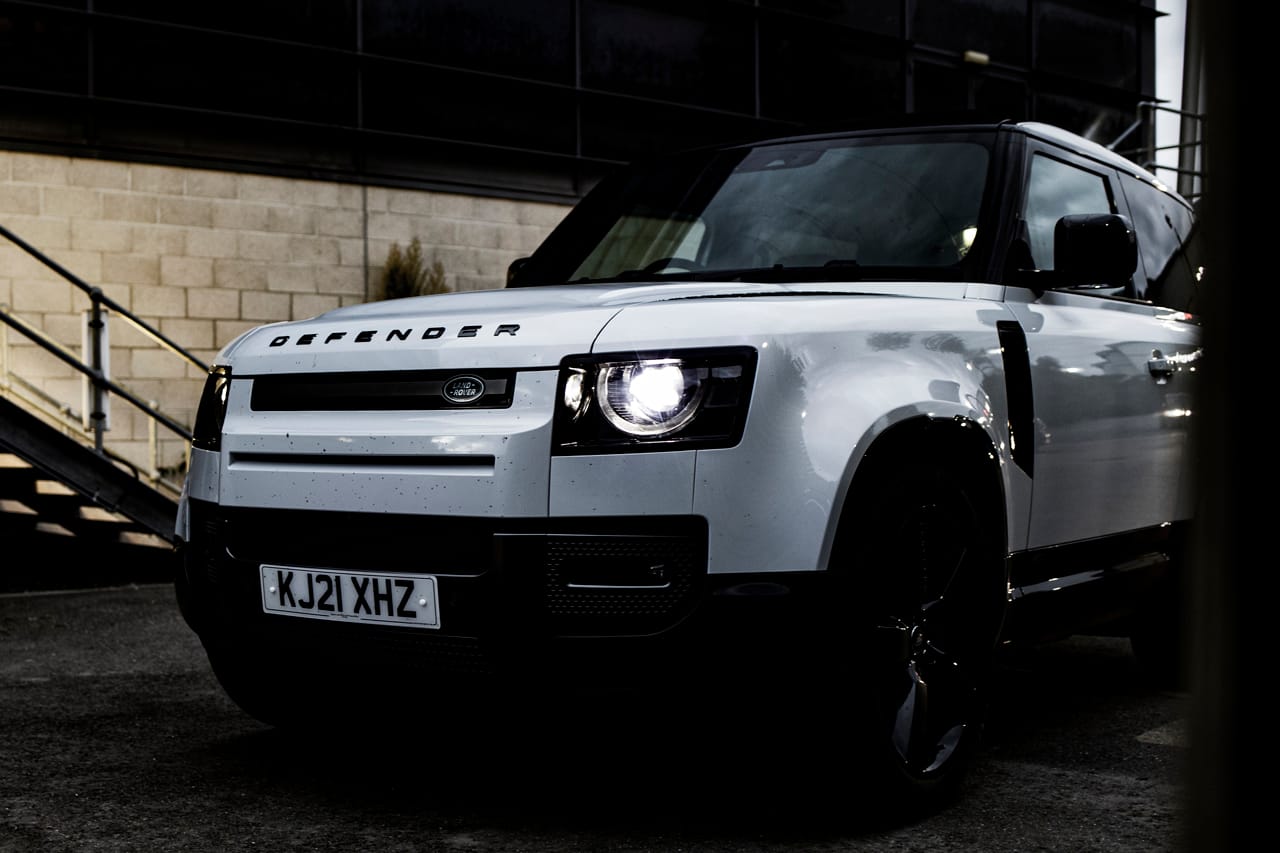