People build their own chicken coops

What a clucking good idea! Savvy people are adopting chickens so they can enjoy fresh eggs despite supermarket shortages

Homeowners across the UK have made the most of extra land by adopting chickens so they can continue to enjoy eggs despite the shortage in supermarkets.

Daniel Stokes, from Manchester, explained he bought chickens and was building a coop after being given time off from his role as an airline cabin manager. Meanwhile Sophia Iwanuik, from Croydon, south London, told how she bought four chickens in light of the ‘current climate’.

Other proud chicken owners told FEMAIL how they have long tended to their flocks and are now reaping extra benefits.

They have been able to furnish themselves and neighbours with fresh eggs at a time when the essential is in short supply on store shelves.

Owners also described the ‘soothing effect’ of watching their hens pecking their lawn while in isolation.

However the British Hen Welfare Trust released a statement to remind owners to remain vigilant after ‘anecdotal evidence of an increase in pet hens being stolen’ amid the heightened demand for eggs.

‘WE GIVE EGGS TO OUR NEIGHBOURS’ 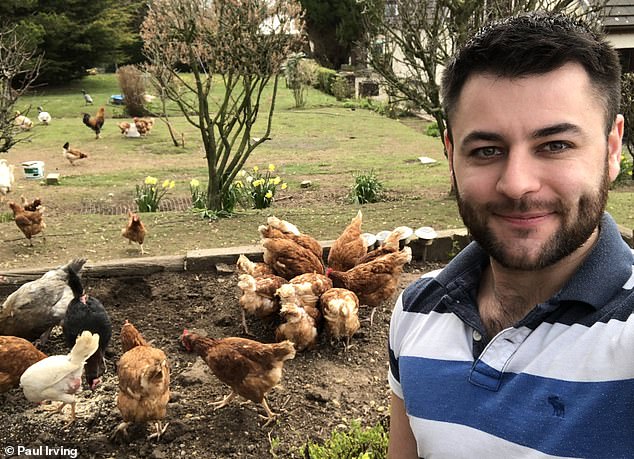 Software designer Paul Irving, 29, from Cumbria, shared this picture of his hens that he keeps with his partner Tony, 43. I recommend keeping chickens. They’re easy pets and come in a range of colours. We rescued some ex-battery hens that were due to go for the chop but we also have some of our own that we hatched. We get around 20 eggs per day but give them to family and neighbours as well as using them for ourselves’

‘SHE PROVIDES FOOD FOR THE FAMILY’ 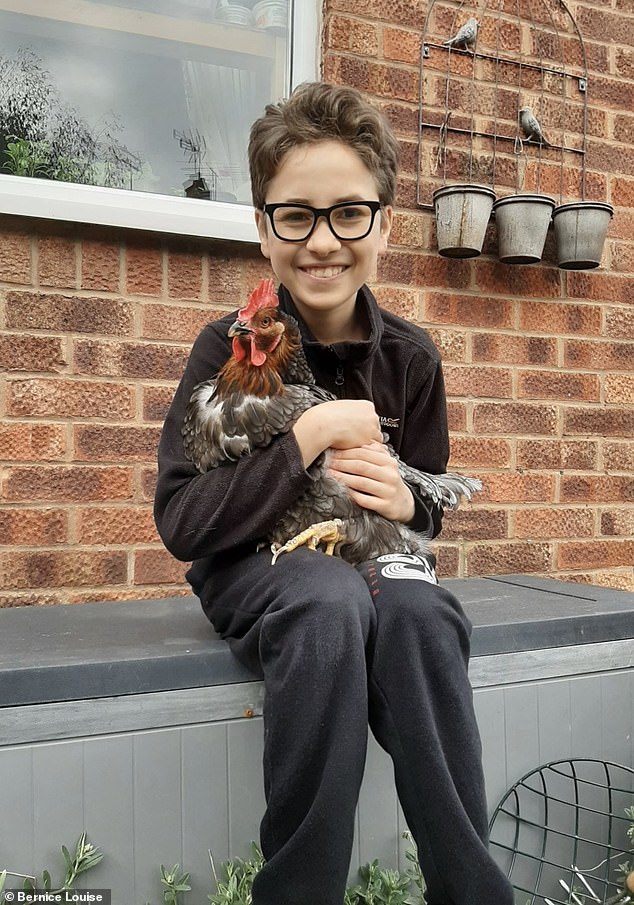 Bernice Louise, from Studley, Warwickshire, shared a picture of her son, Lewis, 12, with their hen called Dot. The school nurse said: In times like this, she provides food for the family. After lockdown we will be rescuing some ex-battery hens so that they can enjoy the rest of their lives in a safe environment and the bonus for us is lots of lovely eggs. Bernice said Dot laid for the first time in six months last week and must have known they were ‘desperate’ for eggs

‘THEY GET YOU OUT OF THE HOUSE’ 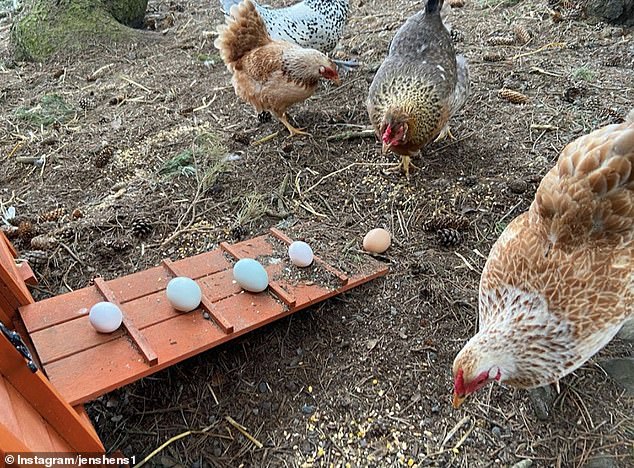 Jen, from Scotland, shared this adorable picture of her hens and their pastel-coloured eggs. The first-time chicken owner shared the picture to her Instagram page which is dedicated to her flock comprising of eight hens and one cock. She told FEMAIL: ‘I got the chickens for my birthday and the benefits include fresh eggs most days and they get you out the house. They are fun to be around and have their own little personalities’

WE WANTED TO BE PREPARED 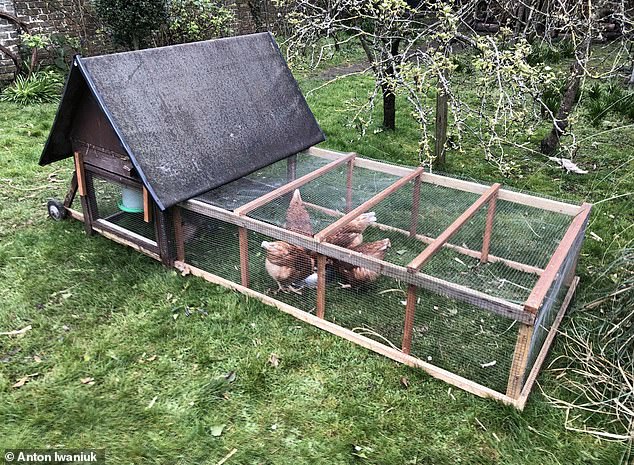 Sophia Iwanuik, from Croydon, south London, shared a picture of her new family chickens. She told FEMAIL: ‘With the current climate, we called up a farm in Crawley, ordered four chickens and picked them up for around £9 each’. She said they are named Lemon, Piri and Peri, and Herb

‘THE COOP KEEPS ME BUSY WHILE I’M OFF WORK’ 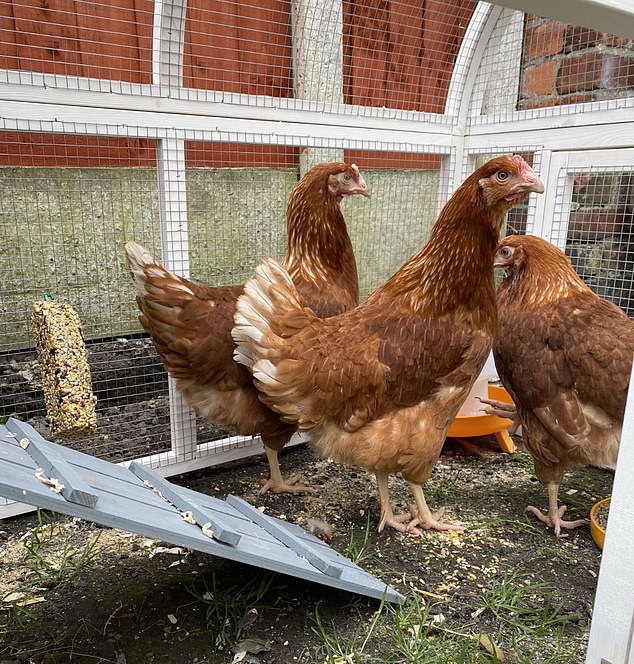 Cabin Manager Daniel Stokes from Manchester tweeted that he was building a chicken coop while many flights have been grounded. He told FEMAIL: ‘It’s keeping me busy building the coop and today building an enclosure in the garden. I’m used to working long hours so trying to keep busy as much as possible. The hens are fab really great to watch and they are such nice birds’

‘THEY ARE STRANGELY SOOTHING’ 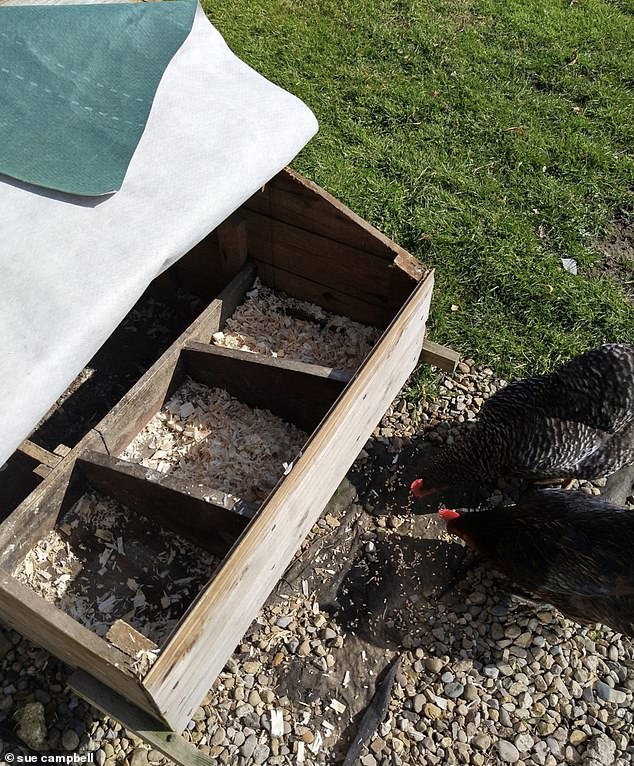 Journalist Sue Campbell, 68, from Teeside, tweeted a picture of her hens, Cookie and Mimi, with the caption: ‘Today I have been mostly cleaning out the chicken coop. #CoronavirusLockdownUK #StayAtHomeSaveLives’. She told FEMAIL: ‘They wake us in the morning by pecking at our bedroom window. The benefits? One gloriously neon yellow yolked egg a day and the strangely soothing effect of watching them peck around the lawn’

‘WE GET FOUR EGGS A WEEK’ 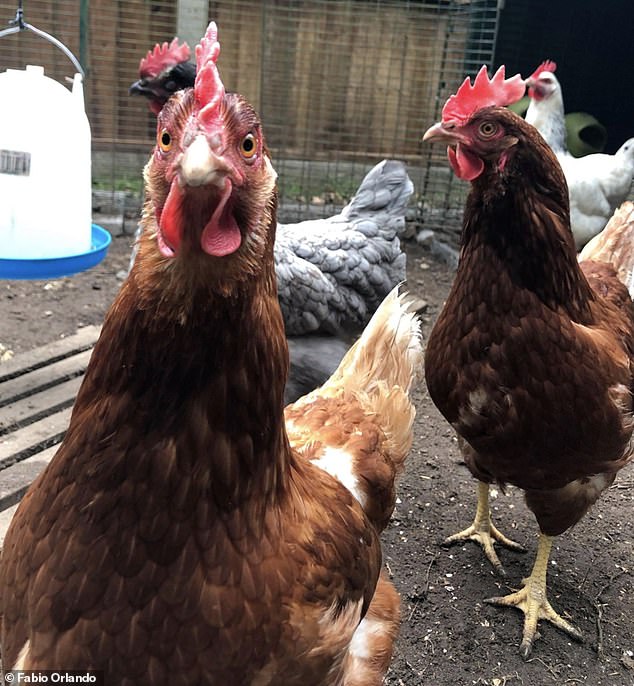 Fabio Orlando, from West Byfleet in Surrey, shared a picture of his hens told FEMAIL his family gets up to four eggs a day yet revealed one old hen had given up during lockdown

‘IT SAVES ME SHOPPING’ 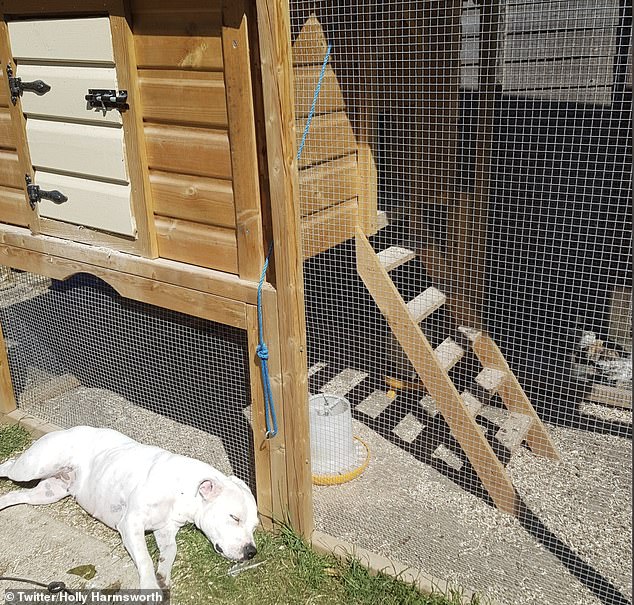 Mother-of-two Holly Harmsworth tweeted a picture of her dog Minnie dozing next to her chicken coop which houses 20 hens. Holly told FEMAIL: ‘I love having chickens. To be able to walk out into my back garden and collect eggs instead of having to go to the shop is amazing especially when you cant be sure if you will be able to get them in the shops at the moment. I am also able to help my family out by boxing them up and leaving them on my doorstep for them to collect’ 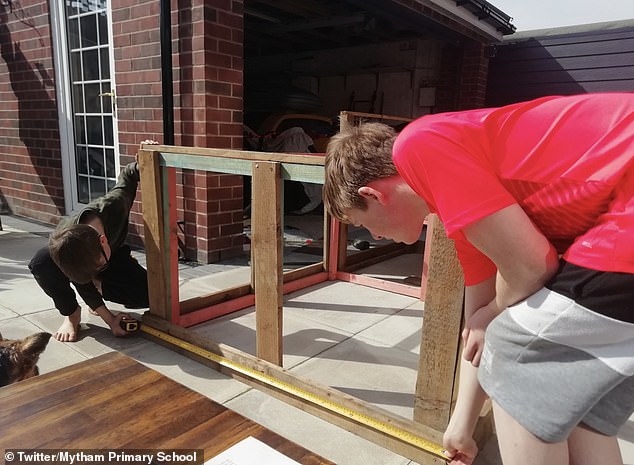