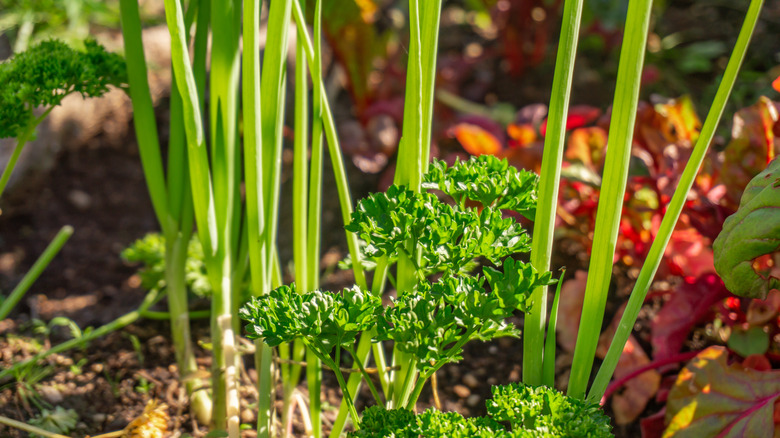 There’s nothing quite like the satisfaction of eating a meal made from produce from your own garden. It’s fresh and tasty, and it’s the payoff for your hard gardening work. It can be tempting if you’re a new gardener to just plant whatever you like to eat wherever you have room for it. But you want to make sure that you’re thinking about what plants are next to each other since the right pairings of plants will give you a heartier crop overall and the wrong pairings will end up lowering your yield (via Farmer’s Almanac). It’s known as companion planting.

Basically, you want to design your garden so plants will provide some kind of benefit for each other. You don’t want to put plants together that will end up fighting over the same resources or that are susceptible to the same diseases or pests (from The Spruce). One of the biggest no-no’s for companion planting is putting together legumes — beans and peas — and anything from the allium family, such as onions, chives, shallots, garlic, or leeks (via The Spruce).

One of the most traditional groupings of crops in the garden is the Three Sisters — corn, beans, and squash, according to conservation organization Native Seeds/SEARCH, which explains how the beans provide nitrogen, the corn gives the beans something to climb, and the squash leaves give shade that helps cut down on weeds and promotes water retention. 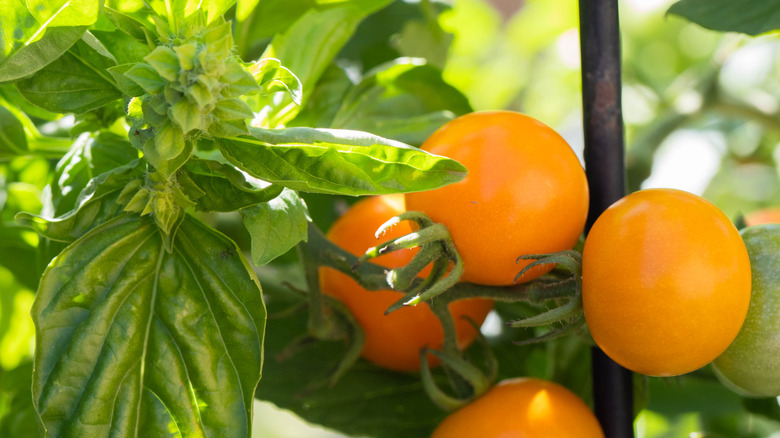 Tomatoes are a popular garden staple, and if you plant them near basil, it will boost production. Basil is also good next to peppers as they can make the peppers more flavorful. You can also pair tomatoes with carrots, spinach, lettuce, onions, celery or asparagus. But don’t put corn, beets, peas, potatoes, or cabbage next to your tomatoes (via Farmer’s Almanac).

To make strawberries even sweeter, try planting the herb borage next to it (from Gardening Know How). Asparagus is also a good companion for strawberries since they root at different levels and aren’t competing over the same resources. They’re also good next to lettuce and spinach. But don’t put your strawberries near anything from the cabbage family (via Insteading).

Onions and carrots go well together as onions are a repellant to the carrot fly and aphids (from Farmer’s Almanac). And if you want to help carrot growth, plant them with radishes since they’re harvested before carrots and work to loosen the soil for the carrots to really grow (via Balcony Garden Web).

And for your potatoes, since they grow mostly underground, they won’t compete for resources with the shallow-rooted cabbage family plants like broccoli, cabbage, kale, and cauliflower (via MasterClass). Putting cilantro near potatoes will help keep potato beetles at bay (from The Spruce).

If you take some time to think about companion planting, you will end up with a more productive garden.