The head of the school principals' union has called for VCE exams to be scrapped this year, arguing the disruption to study is placing an unreasonable mental burden on 2020's year 12 students. 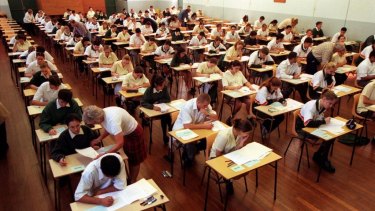 There are calls to scrap VCE exams this year, rather than extend year 12 into January. Credit:Julia Baird

Julie Podbury, president of the Australian Principals Federation, said VCE students could still receive a ranking for university entry based on teachers' assessments of their assignments.

The Andrews government is yet to announce if students will return to face-to-face classes in term two, which begins on April 15. But it is widely expected that most students will be taught remotely in term two and potentially into term three.

Premier Daniel Andrews also said on Sunday that it was possible that end-of-year VCE exams would be pushed back six to eight weeks, potentially into early 2021, so that year 12 students could get an ATAR score.

But Ms Podbury said an ATAR could be derived just as effectively and with less stress for students by cancelling end-of-year exams.

“We talk about taking the panic factor out, which is there in every VCE year; it’s horrendous to watch as a principal,” she said.

“This might be an opportunity to do things differently. We don’t need the end-of-year exams.”

Ms Podbury said students could be given a credible ATAR by combining their assignment results with results from the GAT, or General Achievement Test, a general literacy and numeracy test that is sat by all VCE students.

“If we get to a place where we can actually set the kids down for an exam, let that be the GAT,” Ms Podbury said.

Professor John Hattie, Director of the University of Melbourne’s Graduate School of Education, also rejected the notion of extending the school year for senior students.

Professor Hattie noted that the Australian school year is already the longest in the world.

“We still don’t perform as well as Estonia, Sweden and Finland, who have even fewer days, even if we took 10 weeks out,” he said.

“At this stage I think we should be saying to our year 12 students, take this as an opportunity to do some deep work in some areas, but let’s not panic about what will happen at the end of the year.”

Professor Hattie also previously advised New Zealand's school education authority on what to do in the aftermath of the 2011 Christchurch earthquake. He said he argued very strongly to leave the timeline for the school year untouched.

“That was the best year students ever had with their performance and the year after, they went backwards,” he said.

“The reason for that is teachers started to be concerned about what the students need to know and what they needed to learn, as opposed to, ‘Come to my class and I’ll tell you what you need to know’.”

Federal and state education ministers will meet on Tuesday to look at what can be done to minimise the impact of the COVID-19 crisis on students' studies, especially year 12s heading into tertiary education and work.

Federal Education Minister Dan Tehan said on Monday the ministers wanted to do everything possible to ensure students could continue their education, with co-operation from curriculum and assessment authorities in each state and with individual universities.

He said deliberations were well advanced on what could be done, including universities putting in place flexible admissions for school leavers.

Mr Merlino on Monday said: "We are working on a range of options to ensure VCE and VCAL students can complete their studies."