Pub landlords and restaurant owners have been venting their rage on social media at customers who book outdoor tables but then fail to show up.

General managers of the Prince Louis pub in Braintree, Essex said they’d lost covers for 250 people on the first weekend of reopening following lockdown after tables were booked but customers never arrived.

Posting on Facebook a photo of an empty beer garden at the Prince Louis, general managers Claire and Aaron, wrote: ‘250 – that’s the number of guests we have had not show for bookings so far over the course of yesterday and today.

‘Sadly we have turned many guests away this weekend as we were “fully booked”‘. 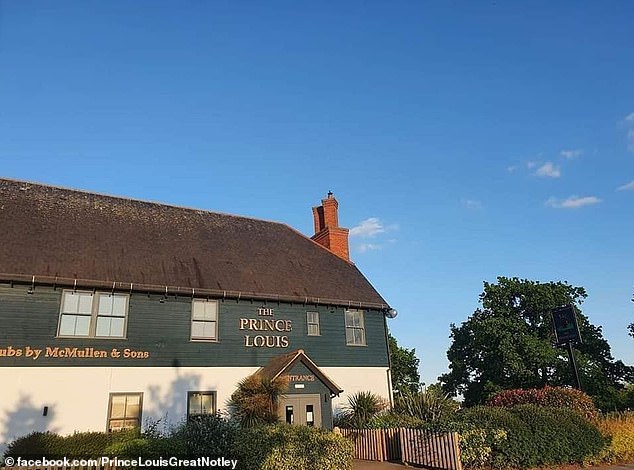 General managers Claire and Aaron, who run the Prince Louis pub in Braintree, Essex revealeds they’d missed out on 250 covers this weekend after customers who booked tables didn’t turn up 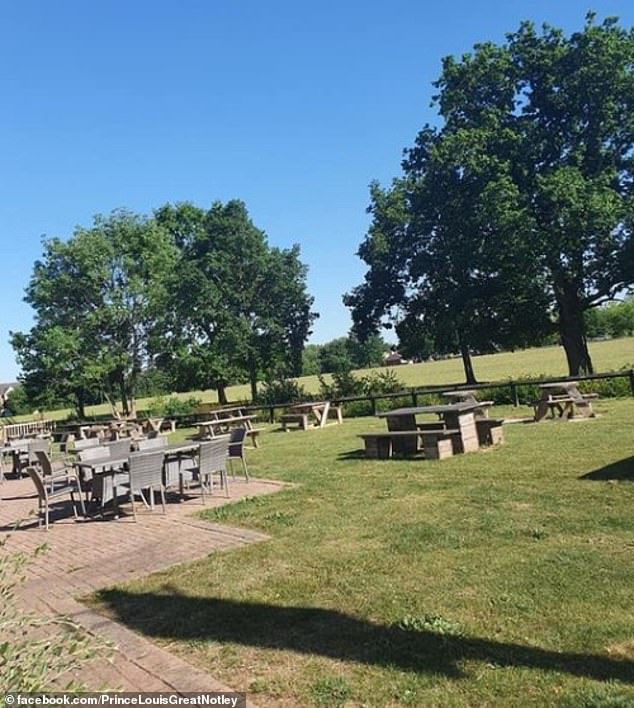 Elsewhere, restaurants and chefs have painted a similar picture despite huge enthusiasm for pubs re-opening, and a dose of sunshine across much of the country in recent days.

Restaurant chief executive Matt Snell who runs a string of eateries across the UK wrote yesterday: ‘If you can’t make it, that’s fine. JUST LET US KNOW.’

He later added: ‘We are having up to 40% of covers CANCEL each day. This is actually a good thing though as we are able to replace these covers. We still have a restaurant suffering up to 15% of covers no showing, despite all the checks we’ve put in place.’

Others agreed that diners should phone ahead if they can’t make a booking saying it was ‘selfish’ to not turn up when the industry had been brought to its knees by consecutive lockdowns and restrictions on indoor dining.

@n1mmers wrote on Twitter: ‘Tell your friends. No shows cost businesses a lot of money. Imagine cooking a meal for 5 of your friends and none of them turn up, no call, no nothing. How p****** would be? How much did the shopping cost you? #nomorenoshows’. 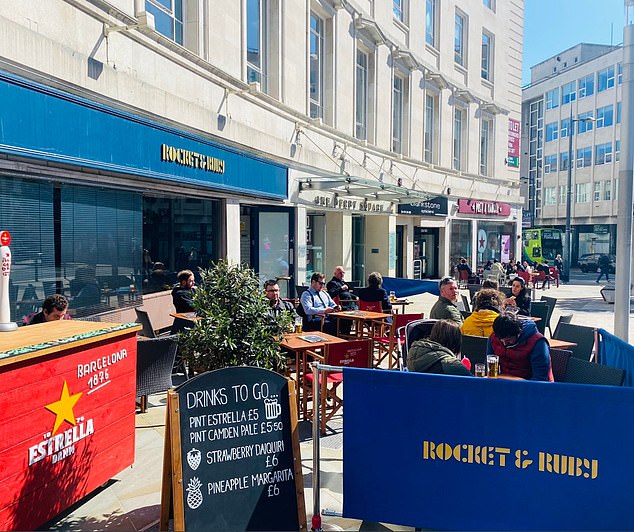 Chief executive of a chain of UK restaurants Matt Snell urged people to call and cancel if they can’t make it, saying his business had also been hit 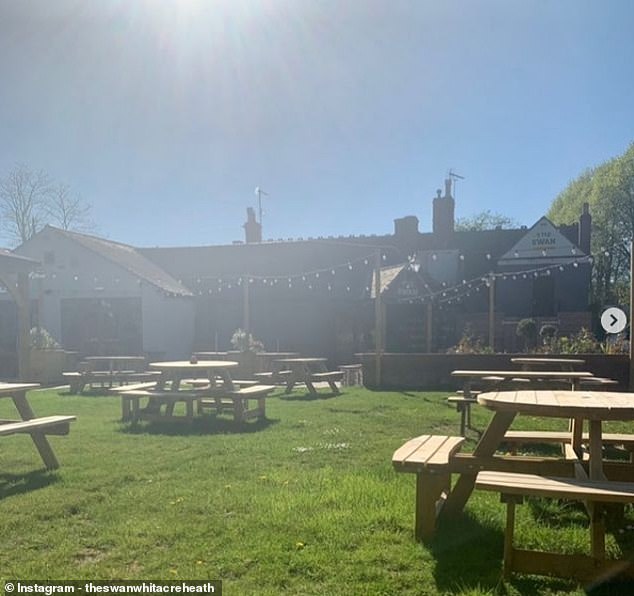 On Instagram, landlords at The Swan pub in Whitacre Heath in Birmingham said while they were ‘absolutely delighted to be back open again’ the pub had fallen victim to no shows saying cancelling a booking would be crucial to their survivial.

‘We are still finding a lot of bookings are either not showing up, or arriving with less people than originally planned.

‘Plans change, we of course understand that – drop us an email to let us know the changes so we can switch things around as soon as we possibly can. By doing this not only are you helping other people return to the beloved pub, but you are in turn supporting our industry and increasing our chances of survival.’ 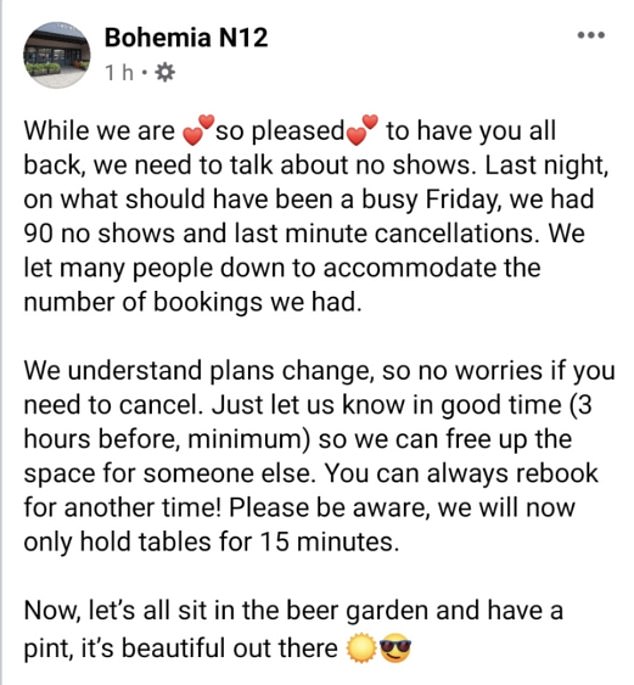 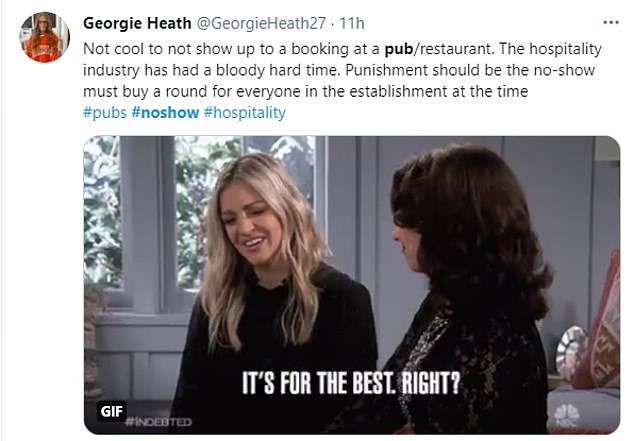 This week, a campaign launched last summer aimed at reducing restaurant and pub no shows reiterated the need for customers to help the industry.

Pub and restaurants owners have been sharing the #nomorenoshows hashtag in a bid to encourage customers to think about the impact not turning up for a booking has on their industry.

When outdoor dining began on April 12th – after 12 weeks of lockdown – photos and videos shared online showed people packed onto tables laden with food and drinks.

Attila Kulcsar, a media communications manager partying in central London on the first night of re-opening said the crowds felt ‘like a return to the ‘real’ Soho of the 1990s’.

‘Tonight’s atmosphere beats the whole of last summer… it really is like how I imagine VE Day,’ the 54-year-old said.

‘It’s almost like watching Hogarth paintings come to life in 2021. There is a wonderfully raucous hysteria everywhere. It’s very celebratory.’