Rich history, poor form: The shame about the name of NRL’s newest club

Good luck to the Dolphins, the newest franchise in the NRL. But what a pity they have started their life in the big time with such a crazy decision to lose their local identity of the Redcliffe Dolphins.

Other newly minted professional franchises have struggled to find a soul, a core, a beating heart, something to transform them from the reality of their existence – essentially a “bucket of contracts” – to an actual club team, with people on and off the field who truly care about the jersey.

The Redcliffe Dolphins had no such problem. They had a proud history to begin with! Established just after World War II, they had no less than the mighty Artie Beetson playing for them in the mid-1960s, have won countless premierships and their whole storied past is a cherished part of the rich fabric of the region.

But the very moment they make it to The Show, they are suddenly too good for the area, and drop half their identity because, in the words of their CEO Terry Reader to me on Sports Sunday, “Our club will be more than just Redcliffe.”

I was more or less polite to him, being live TV and all, but let me be a little more frank here.

Where art thou, Redcliffe?Credit:John Shakespeare

The point is, to so callously throw away that history in the pursuit of national prominence is a tragic waste of a proud past. It is disrespect of your own proud past.

Super Rugby made the same mistake with its franchise teams – the Kings, the Blues, the Highlanders – having no geographic anchor and it never worked. It is one thing to try and grow your base by going big, but when it pisses off the base you are most reliant on the whole thing is completely counter-productive.

If you want to play professional football in Australia next season, you’re going to have to be vaccinated. The first code to fall in with the bleeding obvious was the AFL, which announced on Thursday that all AFL and AFLW players and staff must be fully vaccinated by February 18 next year at the latest or, effectively – barring having a medical exemption – find a new line of work.

How could it be any other way?

In a field of employment where the employees are either constantly all over each other out in the field or together in an office indoors, the AFL’s legal duty of care to provide a safe workplace for its workers easily trumps the quibbles of those who say they have a right to needlessly endanger the lives of all other employees and their families.

Ummmm, that would be no – the latter do not have that right.

AFL football general manager Andrew Dillon put it well: “Our policy delivers on our commitment to best protect our players, staff and the wider community, so we can once again unite as families, as friends, as work colleagues, as teammates, as supporters, as communities, as one.”

Most AFL and AFLW players get it, and have already had the jab.

The Melbourne player Tom McDonald said this week it would be “ethically wrong” for the AFL to release this very policy.

“I’m vaccinated and most players would’ve been,” McDonald said, “but to be honest, I think it’s ethically wrong to force people into a medical procedure.” 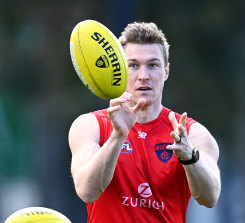 Melbourne player Tom McDonald is vaccinated but disagrees with the AFL’s edict.Credit:Getty Images

Bloody hell, Tom. How hard is this? No-one is being held down against their will and jabbed. That would indeed be ethically wrong. What the AFL is saying is we simply can’t run a comp where some players are at risk of killing not only other players by breathing on them but also other players’ families. We have a legal obligation to make our game as safe as we can, the same way a restaurant must insist the no smoking laws are observed and cabs have working seatbelts. If we ran a business where we failed to take such a simple measure to make everyone as safe as possible and people died, we would be legally liable.

People like you talk about “medical procedure,” in breathy and portentous tones like it’s a delicate operation on your nether regions that no-one has a right to know. Given you have had the vax, I submit that you know that is nonsense. The jab is over in a second and millions of Australians have had the same thing. It has been nothing less than the means of our liberation.

But you went on, when asked if you would be happy to play against unvaccinated players.

“No issue at all. That’s why you get vaccinated, you protect yourself.”

Playing football in the time of the Plague is still a dangerous business, including for those who are close to the footballers. But getting everyone vaccinated is the least dangerous way of the football continuing. To not do that, to not insist that everyone gets the simple jab would be nothing less than . . . unethical.

In sum, the AFL has got it right.

Other sporting codes in this country will have the same debate, and come to the same conclusion, even if, as we speak, the NRL is still prevaricating – possibly trying to make do with some half-arsed word where endless accommodations are made for the unvaxxed. Those players will not endure long, one way or another and certainly not into a new contract. For the world we are headed to is: no jab, no cab to anywhere. And certainly no getting on a plane as Qantas CEO Alan Joyce made clear to me in an interview last week.

The AFL has done it because the logic is unanswerable. And the other codes will inevitably fall into line, because of the same logic.

The push to award retrospective Olympic gold medals to those swimmers beaten by proven East German drug cheats at the height of the Cold War is fine as far as it goes . . . but how far should it go?

Raelene Boyle says track and field should follow swimming’s lead and also look into awarding retrospective medals to those beaten by known drug cheats. It’s not an unreasonable point, given that most of the East German runners at that time have also been proved to have had flecks of urine in their steroids.

But so you stop it even there?

What about all those boxing medals known to have been steered by crooked judges? How about the 1972 USA men’s basketball team who were robbed by some of the most egregious officiating of all time? Or the javelin throwers who, reportedly, were dudded in 1980 because every time the Soviets threw the hosts opened the massive gates at one end of the stadium so they would have the wind behind them? It gets very murky very quickly, yes?

If the IOC does reopen that can of worms it will clearly have to have the strictest protocols, I imagine with needing to have incontrovertible proof that those who beat them had a demonstrably unfair advantage at the time. Suspicion will not be remotely enough. Proof, or don’t coming knocking.

Philadelphia 76ers coach Doc Rivers on why he suspended Ben Simmons from training: “He was a distraction today, I didn’t think he wanted to do what everybody else was doing. It was early, it wasn’t a big deal. I just told him, he should leave then, and we went on with practice.”

Olympic champion swimmer Michelle Ford on swimming in an era when the East Germans were so doped up to the gills they practically had them: “There might be hope for many athletes around the world to justify what they did back in the 80s against the East Germans. Personally, I am at peace with this because I have a gold medal, but I also wish to speak for everyone who didn’t have that opportunity because of the situation with the East German girls … this is about a system that was wrong and cheated [so many].”

Raelene Boyle on looking into re-awarding medals: ″⁣I think it’s fantastic, [but] I don’t think it is going to go anywhere.”

Phoebe Burgess to journalist Jessica Halloran to The Australian on her marriage to Sam Burgess: “I live every day as though I have been through a loss. I loved him dearly. I miss him so much. But he wasn’t handled. He wasn’t looked after. He wasn’t protected in the right way, in the way that may have – not saved our marriage, but it might have led to a true rehabilitation, a true sense of responsibility, owning behaviour, wanting to change that behaviour. Instead of what I’m seeing, disappointingly, being a careful edit, a carefully curated comeback show.”

Packers running back Aaron Jones, on hearing Rodgers’ remarks: “What can you say? He’s right.”

Taj Woewodin, who’s looking to get drafted in the AFL but is already a seasoned pro when it comes to talking in cliches: “Obviously it’s a dream to be at Melbourne, but at the end of the day, wherever I go, if I do go, I’ll give it my best shot. I just take it week by week, that’s the best I can do. I’m just putting my best foot forward.” For my money that had everything but the intent to “give it 120 per cent”.

Miami Dolphins quarterback Tua Tagovailoa on playing with injury: “I’m not 100 per cent, but I was 100 per cent ready to be out there.” Didn’t we just talk about this? 120 per cent, or fuggeddaboutit.

Indian cricketer Hardik Pandya on his philosophies: “Even if I fail, no problem. I make sure that Hardik Pandya has the best opportunity, the best mindset, to perform. If it does not go well, still fine, with a smile I will accept it. But when I am on the ground, I believe everything is possible. There’s nothing impossible. I genuinely believe that. I don’t feel fear. It is OK to lose things. Nah. I will never be happy if I turn up 50 per cent. I want to make sure that when I turn up, I have given my 120 per cent.” Bingo!

Ange Postecoglou on the make-up of his Celtic side: “My view on that is: if you are a strict vegetarian, you don’t drop into Macca’s just because you are hungry mate, you know?” Not really. I have no clue.

NSW Office of Sport director Michael Toohey to ICAC on what he would have done had he known Gladys Berejiklian was in a relationship with fellow MP Daryl Maguire when the latter was pushing hard for $5.5 million of taxpayer money for a clay shooting club with her support: “I would have expressed my concerns through the executive structure and into the minister’s office . . . Why were we pushing an allocation of funds to a local member with such scant information? I can’t see how this is anything but a conflict of interest.”

Team of the Week

The Matildas. About to play a two-match friendly series, against Brazil.

Phoebe Burgess. I, for one, can’t follow all the ins and outs of the allegations and counter-allegations in the whole sad saga of her time with Sam Burgess, but through it all she has kept her dignity and I admire her desire to seek change in the treatment of women.

Josh Giddey. The young Australian, just 19 years old, starred on debut in the NBA for the Oklahoma City Thunder.

Sir Dragonet. 2020 WS Cox Plate winner broke down during an early-morning gallop at Moonee Valley and that was that. Instead of defending the title, he was clinically killed.

Chicago Sky. Defeated the Phoenix Mercury for the WNBA title. Coach Sandy Brondello and player Alanna Smith for the Mercury were the only Australians involved.