This time, five of the company’s grill men — who said they were recruited to move from Turkey to work at the company’s US locations — have filed a lawsuit, alleging that they were stiffed on overtime pay.

The suit, which was filed Tuesday in Manhattan federal court, alleges that Nusret Gokce, who was nicknamed "Salt Bae" by internet users, misclassified the five employees as managers to avoid paying overtime — while insisting they regularly work seventy hours or more per week.

Gokce himself is named as a defendant in the suit as well as his Saltbae Burger restaurant in New York and the Nusr-Et Steakhouses in New York, Miami and Dallas.

The five men, all Turkish citizens, worked at Nusr-Et Steakhouse in Istanbul before the chain recruited and "Gokce personally encouraged" them to move to the chain’s US locations, according to the suit.

The men allege that their visa applications and official job descriptions overhyped the work they would actually be doing to paint them "as employees with managerial authority" in order to "misclassify Plaintiffs as exempt and avoid paying them overtime wages."

But after arriving in the US, the suit says, the men were assigned "to work grueling hours in non-managerial positions at the restaurants" even though they were only eligible to be paid a flat weekly salary.

All of the men most recently made a weekly salary of $1,125, regardless of how many hours they worked, the suit charges.

So-called non-exempt workers, which are most non-managerial positions, are entitled to overtime pay equal to 1.5 times their hourly wage after working 40 hours a week.

The men are suing for unpaid overtime as well as other damages.

SALT BAE FED A WOMAN STEAK AS HER DATE WATCHED IN CONFUSION, AND TWITTER USERS ARE UNSURE WHAT TO THINK

The suit also alleges that Gokce himself was aware of the situation.

"When Gokce was present at the Restaurants, he personally supervised Plaintiffs’ work," the suit says.

"Gokce had an aggressive managerial style, frequently cursing at Plaintiffs and blaming them for other employees’ mistakes," it adds. 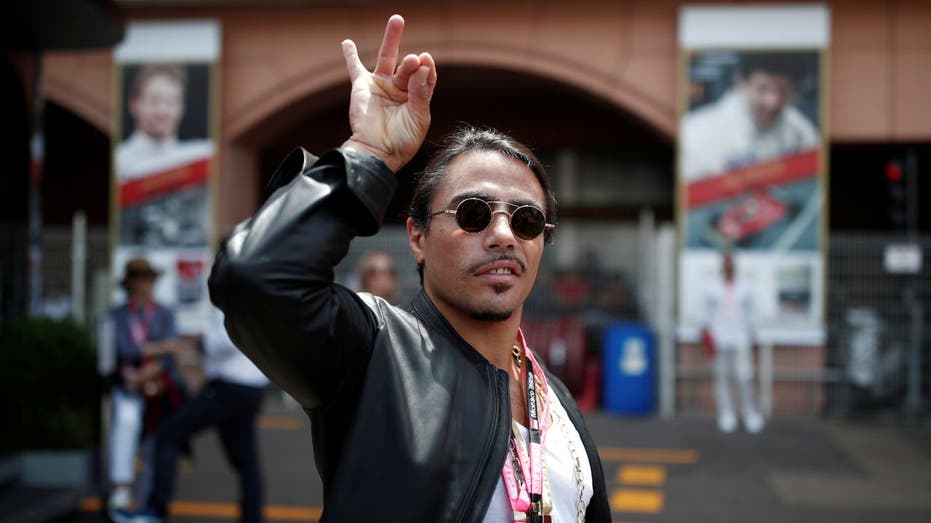 “Salt bae” Nusret Gokce himself is named as a defendant in the suit as well as his Saltbae Burger restaurant in New York and the Nusr-Et Steakhouses in New York, Miami and Dallas. (REUTERS/Benoit Tessier / Reuters Photos)

And when Gokce was present, the suit says that "both Gokce and the Restaurant managers instructed Plaintiffs to work additional hours because the ‘boss’ was present."

The men were also asked to perform other menial tasks such as "take out garbage, wash dishes, clean stove hoods, clean toilets, prepare special meals for the managers and Gokce when he was present, and run errands and purchase products when there were shortages at the Restaurants," the suit says.

During the pandemic and "periods of social unrest in New York," managers ordered the men to work security, the suit says.

In addition to the restaurants named in the lawsuit, the company also has locations in Dubai, Abu Dhabi, Mykonos and several other cities, according to its website.

Prices run high at the eateries, with a simple kale salad appetizer on the menu in New York going for $25.

A thick-cut wagyu ribeye steak will cost diners $100 and the "Saltbae Tomahawk" wagyu steak clocks in at $275 a plate.

Gokce opened a restaurant in midtown Manhattan in 2018 as he capitalized on his newfound fame when an image of him flamboyantly sprinkling salt on a steak went viral.

But he quickly found himself at odds with local critics, who said the food was pricey and unsatisfying.

The internet sensation also had a run-in with the Department of Health, which looked into the restaurant as images went viral of Gokce handling cooked food without gloves — a health violation.

At the time, Gokce told The Post he would begin donning black gloves to avoid any infractions and that he intended to stay in New York for the long haul, despite the critics.

But Gokce found himself in hot water again recently, when he was hit with a $5 million copyright infringement lawsuit in April by a Brooklyn artist, who alleged the social media star used his artwork all over the world without permission.

Representatives for Gokce did not return The Post’s request for comment.