Prime Minister Scott Morrison has announced a $130 billion package to support the wages of up to 6 million Australian throughout the coronavirus crisis.

The "Jobkeeper" subsidy will be worth $1500 a fortnight and paid to employers to pay their employees. 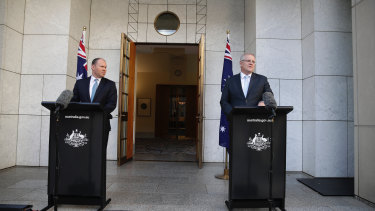 The Jobkeeper payment will be delivered through the Australian Tax Office. The payment will be a flat-rate of $1500 a fortnight to keep workers on the books regardless of their salary.

It will be administered through the single touch payroll system, requiring businesses to keep the worker employed in order to distribute the payment.

"That means they can still have them on the books and start working together on how they can resuscitate the business on the other side," he said.

"We want to keep the engine of our economy running. It may run on idle for a time but it must continue to run."

Mr Morrison also announced the Centrelink partner threshold rate has been raised to $79,000. This means Australians will be eligible for welfare payments if their partner earns up to this amount.

The threshold had previously been set at $48,000, disqualifying up to 400,000 people who had become unemployed from receiving welfare.

Treasurer Josh Frydenberg distinguished the Jobkeeper payment from the wage subsidy scheme in the United Kingdom.

"Their scheme is for three months. Our scheme is costed for six months," he said.

New Zealanders and casuals working for more than one year will also be eligible for the payment.

Mr Morrison confirmed Parliament will have to be recalled to pass the legislation required for the new $130 billion package.

"If there was agreement reached on the legislation before Parliament sits that would allow greater clarity," he said.

Parliament was not scheduled to reconvene until August, but is expected to sit with a quorum of MPs required to pass the emergency legislation.

Mr Morrison said it would not be recalled this week as the legislation "will take at least this week to draft".

"I hope to move through that in a cooperative way [with the opposition]."