Secret to persuading people to drink less wine at home is reducing bottle size by a THIRD, study shows

Switching to smaller bottles of wine when drinking from home ‘significantly reduces’ how much you’ll get through in a session, according to researchers.

Experts from the University of Cambridge looked at the effects varying wine bottle sizes had on the amount people would drink in a single sitting while at home.

The team found that people buying 50cl (18oz) bottles of wine instead of the usual 75cl (26oz) bottles drank about 4.5 per cent less than they normally would. 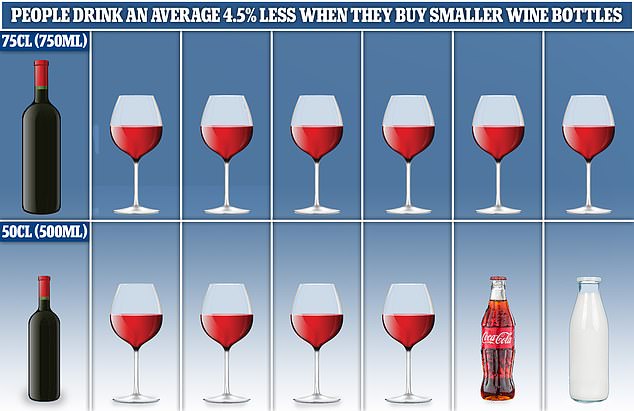 For households drinking between 52 and 211 onces of wine per week, buying wine in 50cl bottles compared to 75cl bottles reduces consumption by 4.5 per cent. The smaller 50cl bottles contain as much liquid as a bottle of Coca-Cola or a pint of milk Switching to smaller bottles of wine when drinking from home ‘significantly reduces’ how much you’ll get through in a session, according to researchers. Stock image

The team recruited 186 households with a moderate drinking batter of about 52 ounces of wine per week – roughly in line with UK average consumption.

Alcohol is the fifth largest contributor to early death in high income countries and the seventh world-wide and there is widespread interest in ways to reduce consumption, said the research team from Cambridge.

Larger portions and packages are known to increase consumption of food and non-alcoholic drinks, and larger wine glasses increase the amount of wine consumed.

With that in mind the team decided to find out if the same applied to wine bottles.

Volunteers reported their consumption over two 14 day periods and buy their usual amount of wine – but in either 75cl bottles or 50cl bottles – in a random order.

Each household photographed their bottles at specific intervals during the study to enable the researchers to measure both the volume they had consumed and the speed at which the wine was drunk.

The households reported on any additional wine that they consumed during the study period, such as that consumed out of the home.

They also let the study team know if they had guests that drank from their study wine, or whether there were other events that affected their usual drinking habits.

When asked about their attitudes towards the 50cl bottles, 44 per cent of respondents made positive comments about the smaller containers.

One said: ‘I had never thought about buying smaller volume bottles before but enjoyed drinking them as it was just the right amount to consume in an evening’.

About a third of the volunteers had a negative attitude towards the 50cl bottles of wine with one saying ‘it’s better value buying the bigger bottle’.

One volunteer in the study said they found they drank more from the smaller wine bottles, saying with a large bottle they’ll have a glass then save the rest. 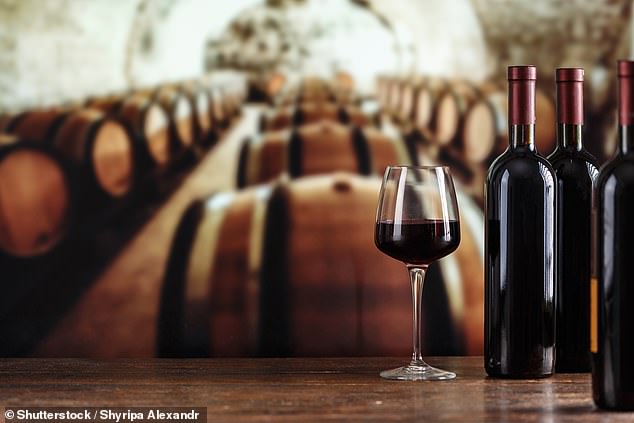 The team found that people buying 50cl (18oz) bottles of wine instead of the usual 75cl (26oz) bottles drank about 4.5 per cent less than they normally would. Stock image

For households drinking between 52 and 211 onces of wine per week, buying wine in 50cl bottles compared to 75cl bottles reduces consumption by 4.5 per cent.

‘There was some uncertainty around this estimate, but if this effect is replicated in future research, encouraging people to buy wine in smaller bottles could be one way to help cut wine consumption at home,’ the team wrote.

Mantzari and Codling said that with less wine in a 50cl bottle, there is less available to drink, reflecting a tendency for people to consume ‘units’ rather than a portion or package size – as seen in studies on food.

‘A 50cl bottle is not too small to be considered too different from the norm – which might make people feel resistant – but is small enough to reduce consumption’ said Professor Dame Theresa Marteau, senior author.

‘But it’s hard to source non-premium wine in 50cl bottles, especially at the moment and those that are available cost more per centilitre than the usual 75cl bottles.

‘So fiscal policies that make 50cl bottles more affordable would be helpful, while still discouraging consumption, in keeping with the strong evidence that reducing the affordability of alcohol reduces its consumption’.

The findings have been published in the journal Addiction.

WHAT IS ALCOHOLISM AND HOW IS IT TREATED IN THE UK?

Alcoholism is the most severe form of alcohol abuse and involves the inability to manage drinking habits.

It is organised into three categories: mild, moderate and severe. Each category has various symptoms and can cause harmful side effects.

If left untreated, any type of alcohol abuse can spiral out of control.

Individuals struggling with alcoholism often feel as though they cannot function normally without alcohol.

This can lead to a wide range of issues and impact professional goals, personal matters, relationships and overall health.

Sometimes the warning signs of alcohol abuse are very noticeable. Other times, they can take longer to surface.

When alcohol addiction is discovered in its early stages, the chance for a successful recovery increases significantly.

Common signs of alcoholism include:

For instance, drinking can impact your reaction time, causing you to have slow reflexes and coordination.

That’s why drinking and driving is extremely dangerous. Getting behind the wheel of a car can alter your perception of speed and distance, putting yourself and others at risk.

Additionally, consuming too much alcohol can affect your long-term health. Some side effects may lay dormant for years before they surface.

Because of this, professional medical care is required for proper diagnosis and treatment.

There are different forms of treatment available based on frequency and severity of alcohol abuse.

Recovering from alcohol addiction is a process that continues long after rehab.

It takes commitment to practice and apply the techniques you learn in rehab, counseling, support groups and other types of therapy.

Although every individual will have their own recovery plan that’s tailored to their specific needs, treatment generally follows a structure.

Alcohol treatment is broken into three sections, consisting of:

The first stage in alcohol addiction recovery is detoxification. This phase should be completed with the help of medical professionals due to the potential for serious, uncomfortable withdrawal symptoms. Many times, individuals are given a medication to help alleviate the painful side effects of a withdrawal.

There are two types of rehabilitation that help treat alcoholism: inpatient rehab and outpatient rehab. Inpatient rehabs are intensive treatment programs that require you to check into a facility for a certain period of time, usually 30, 60 or 90 days. Outpatient rehab allows individuals to participate in a recovery program while continuing with their daily life. Talk with your doctor about treatment options to determine which form of recovery will best fit your needs.

The recovery process doesn’t end with the completion of rehab. Long-term sobriety requires ongoing therapy and may entail support groups, counseling and other recovery resources. These will make sure you maintain sobriety and continue on a happy, healthy path for months and years to come.

Related Posts:
World News
Trump gives TikTok deal with Oracle and Walmart his blessing
Birmingham park visitor in critical condition after found in lake
UK coronavirus cases rise by 4,422 in biggest rise for 19 weeks as 27 more die
Student, 20 with 34J breasts crowdfunding for £5,000 reduction surgery
McConnell urges GOP senators to ‘keep your powder dry’ on Supreme Court nominee
Recent Posts
This website uses cookies to improve your user experience and to provide you with advertisements that are relevant to your interests. By continuing to browse the site you are agreeing to our use of cookies.Ok