‘So sick of this’: Female surf champion calls out inequality of prize money in Sydney event

The female champion of a premier Sydney longboard surf competition has called out the inequality of receiving less than half the prize money as the male winner but organisers say they have done nothing illegal.

Lucy Small, who won the Curly Maljam on the northern beaches on Saturday, has created waves in the surfing community after calling out the inequality during her acceptance speech. 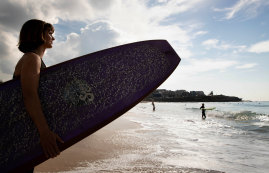 Lucy Small won a longboard surf competition at North Curl Curl over the weekend but was upset at receiving less than half the prize money of the men’s winner.Credit:Janie Barrett

Small has since uploaded the video to her own social media platforms and called upon people to email their thoughts to the organisers of the event, the Curl Curl Longboarders Club.

Club secretary Phil Nicol defended the gap in prize money and said the larger sum for the men was a marketing effort to entice the “names”.

Nicol said the club’s committee had since taken the feedback and would make prize money equal across all categories in the future, including the under 21s and over 50s.

“We asked the question why aren’t the over 50 men jumping up and down because they didn’t get the same money as the men?,” Nicol said.

“That’s ageism, the ageism card could have been pulled out.”

Club president Tim Reilly said the prize money was made unequal as it had been that way since the event was first founded in 2011.

“I just feel bad for the guys who ran it for the whole day and put hundreds of hours into it. She should have come and seen me. It was an easy thing that could have been fixed,” he said.

Small said she didn’t realise the prize money was unequal prior to the competition and assumed all tournaments had followed the World Surf League who committed to equal prize money in 2018. The event at North Curl Curl was not a WSL sanctioned contest.

She said she only found out about the gap when she saw the novelty cheques at the presentation.

“We are just so sick of this happening,” she said. “I am just really tired of putting in so much time and effort and money and investing so much into going to these events … and getting less than half then the reward.”

Small said the response had been overwhelmingly positive with many female surfers and spectators thanking her.

“It was completely fine out there … we are not fragile little daffodils who can’t get through a shore break,” she said.

Sports news, results and expert commentary delivered straight to your inbox each day. Sign up here.