It was seven years ago during a trip to the Melbourne Museum that Vincent Peters chanced upon a photograph that would forever change his understanding of who he is and set him against powerful forces now before the Victorian Supreme Court.

The photograph was a picture of Lizzie Davis, a woman Peters recognised as his great grandmother, included in a collection documenting the Ngurai Illum Wurrung, a First Nations people whose traditional lands cover a stretch of northern Victoria between the Campaspe River and Goulburn Valley. 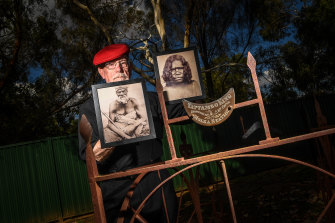 Peters, a light-skinned man who could be mistaken for a Parisian with his white goatee and red beret, had always known he was Aboriginal through his father’s side of the family. His namesake grandfather, Vincent Peters senior, a prisoner of war who died on the Burma Railway, was part of three generations of his family who lived at the Cummeragunja mission on the banks of the Murray.

What he learned after seeing the photograph was that, through Lizzie Davis, he is directly descended from Charles Tattambo, the last known Ngurungaeta or headman of the Ngurai Illum Wurrung who, despite the ravages of the settler wars, refused to leave his people’s traditional lands near Murchison.

Since that discovery, he has traced his ancestry with the help of Museums Victoria and made connections with family he never knew he had; about 60 other descendants of Charles and Mary Tattambo, apical ancestors of the Ngurai Illum Wurrung clans.

He is now representing them – and his own children – in a high-stakes battle with a rival First Nations people, the Taungurung, who have claimed his great grandmother as their own ancestor to underpin a $33.7 million land rights agreement with the Victorian government.

He is one of four plaintiffs, on behalf the Ngurai Illum Wurrung, Waywurru and Dhudhuroa clans from the north and north-east of Victoria, who are seeking to quash the 2018 Taungurung agreement reached under Victoria’s Traditional Owner Settlement Act and preserve their own native title rights.

The dispute is being closely watched as a test case for the workability of Victoria’s TOS regime established 10 years ago as a less-onerous alternative to the Commonwealth native title scheme. To qualify for a Recognition and Settlement Agreement, a form of native title that can deliver substantial funding and lucrative land use arrangements, applicants must show a connection to the land through apical ancestors.

David Shaw, a Holding Redlich partner who is representing Peters and his fellow plaintiffs pro bono, said one of the key issues in the case was the government’s failure to recognise the Ngurai Illum Wurrung as a language group distinct from the Taungurung and to consult with descendents of apical ancestors claimed by the Taungurung who were not party to the RSA negotiations.

“Our Ngurai Illum Wurrung, Waywurru and Dhudhuroa clients believe their ancestors and country have, in effect, been stolen from them by reason of the agreement made by the government and the Taungurung,’’ Mr Shaw said.

Dean Cowie, the former director of the government’s native title unit who led the negotiations with the Taungurung, told the court in an affidavit that it was the state’s view that “who was regarded as a Taungurung ancestor was largely a matter for the Taungurung.”

Mr Cowie told the court that the state received information from Native Title Services Victoria, the government agency now known as First Nations Legal & Research Services which advises Aboriginal claimant groups, concluding that Ngurai Illum and the Taungurung had language, laws and customs in common and it was “reasonable to include country associated with the Ngurai Illum” in the proposed agreement.

Taungurung Land and Waters Council Aboriginal Corporation chief executive Matthew Burns said the challenge to the agreement – the culmination of a 20-year campaign by the Taungurung to secure rights over their traditional land – had distressed and demoralised his community.

Mr Burns told the court in an affidavit that until the case is resolved, the Taungurung cannot exercise any of the rights in the agreement, including the right to hunt, fish and access Taungurung lands. “Many of our own community members are frustrated by the ongoing delay and uncertainty and are losing faith in the entire settlement process,’’ he said. 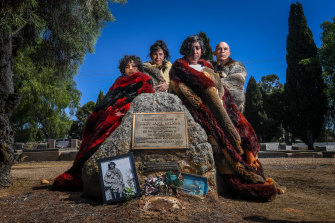 Waywurru elders Liz Thorpe and Thorn Smith with Thorn’s children Shaniece and Jalina, pay respect to Mary Jane Milawa (circa 1828- 1888) at her grave in Wangaratta. Liz Thorpe is a plaintiff in a legal challenge to $33.7 million land rights agreement between the Taungurung and Victorian government.Credit:Justin McManus

Mr Peters said he first learned about the state’ negotiations with the Taungurung in March 2018, just six months before the agreement was finalised.

“I am deeply distressed by the actions of the state and the Taungurung in claiming my ancestors as Taungurung,’’ he told the court in an affidavit.

“This is because my descendants, including my children and grandchildren and other descendants of my apical ancestors will never know their real family history and will never have the chance, in the name of their own ancestors, to lay claim to their land through native title proceedings.

“In my opinion the actions of the state and Taungurung perpetuates the dark history of colonisation and dispossession of Aboriginal people in Victoria. It’s a new kind of dispossession.”

Mr Peters told The Sunday Age it made no difference that his disputed ancestors were long dead. “They are still with us today,'' he said. "To take someone’s ancestor is like stealing your kids.”

Lizzie Davis is one of four apical the Taungurung are accused of "stealing" to support their Recognition and Settlement Agreement with the government. Although there is no dispute over much of the land covered by the Taungurung agreement, the boundaries of their claim absorb the traditional lands of the Ngurai Illum Wurrung to the north and overlap with the traditional lands of the Waywurru and Dhudhuroa to the east.

The case has been set down for trial before Justice Melinda Richards on June 15.