If you haven’t yet caught wind of Amazon’s “The Boys,” the time is now.

The series, which debuted last year with a downright maniacal first season, is back with a more in-tune, satirical and introspective look at celebrity infatuation with its second installment ― launching Sept. 4 with three episodes.

“The Boys” is based on Garth Ennis and Darick Robertson’s comic series of the same name and created by Eric Kripke of “Supernatural” fame. The story follows a group of rebels led by Billy Butcher (Karl Urban), who are dedicated to exposing the corrupt and evil intentions of mega-corporation Vought’s superheroes, or “supes” — led by the elite “Seven.” These superheroes, captained by Superman-esque Homelander (Antony Starr), perform acts of justice for the adoring public while also being churned through the PR machine ― starring as themselves in blockbuster movies, appearing on food packages and headlining speaking engagements.

The thing is, these supes aren’t the heroes at all. They’re profoundly immoral.

The first season aimed to dissect the power held by the famous and if it’s at all warranted. Season 2, however, digs deeper and questions the notion that superheroes are made, not born.

HuffPost reporters Leigh Blickley and Bill Bradley talk through all the exciting madness to come as The Boys try to oust The Seven.

“The Boys” is satirical commentary on stan culture, spinning a web of introspection into real-life corporations like Amazon, Marvel and Disney and dissecting the not-so-glamorous effects they have on society. It’s a compelling, twisty, wacky watch. 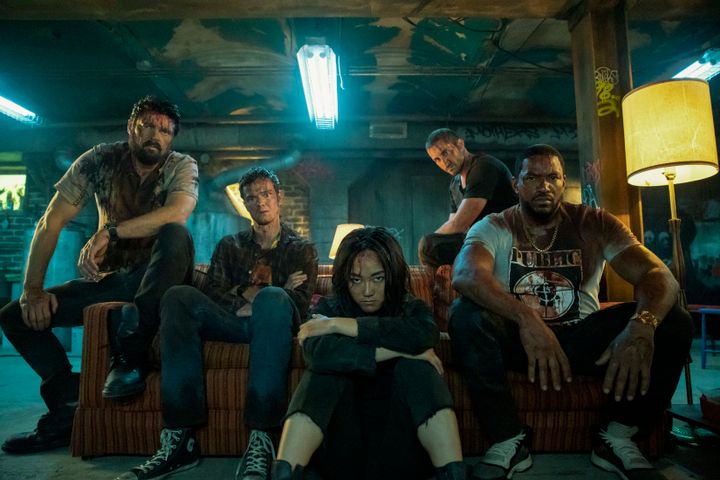 Where Season 2 Picks Up

Bill Bradley: Leigh, “The Boys” Season 1 brought us babies with laser vision, dolphin escape sequences and lovable antiheroes trying to take out morally bankrupt supes. Season 2 picks up on that as The Boys continue to try to take down superhero-making company Vought, adding in shady new characters, such as Aya Cash’s Stormfront, and even the Piano Man himself, Billy Joel. What are your thoughts on the new season?

Leigh Blickley: I have to say, Bill, I’m very impressed with what I’ve seen so far. While Season 1 was sometimes a bit all over the place, the new season really finds its groove early and kicks off with a bang.

It picks up right where Season 1 left off as Vought comes to terms with the death of VP Madelyn Stillwell (Elisabeth Shue). Considering she was the one who kept lead supe Homelander in check, there’s an ominous vibe in the air. Who knows what he’s capable of? (Well, we do, you know, because he scorched Madelyn to death with his laser eyes.) The Boys are also reeling after an operation gone wrong and the MIA status of their leader Billy, who discovers his thought-to-be-dead wife Becca (Shantel VanSanten) is actually alive and living in a secret community with her super-powered son, whom she had with Homelander. What was your reaction to Becca’s storyline?

BB: Yeah, now’s probably an appropriate time for a surprised Pikachu meme, because that’s what my face looked like when it was revealed that Becca was alive with Homelander’s superhero son. (“’Chu gotta be kidding me!”) That’s a major departure from the comic book source material where both baby and mom are not around. It also changes everything about Karl Urban’s Billy Butcher, whose life’s mission was to take out Homelander for killing his wife. Welp, got some news for you, dude …

How Billy deals with that is just one of the questions hanging around in Season 2: What’s the deal with A-Train (Jessie Usher) after he suffered a heart attack fighting Starlight (Erin Moriarty)? What’s going on with weirdly rebellious newcomer Stormfront? Is The Deep (Chace Crawford) going to stop accidentally killing his sea creature friends? (Uh, def not.) What are the most interesting character arcs for you in Season 2?

LB: Last season, I was all about Hughie (Jack Quaid). He was such a naive little fish out of water in this rebellious world of The Boys and I found him to be such a refreshing, quirky delight. This go-around, he’s a little more subdued ― spending most of his time listening to Billy Joel music and contemplating his life without Billy and Starlight, his enemy-turned-friend-turned-lover who is playing double agent as a supe in The Seven.

So far this season, I’m more interested in Homelander, who is on the edge of completely breaking down without Madelyn’s calming presence. Each scene he appears in is downright frightening. Starr’s performance is incredible; he is committed to every eccentricity. Stormfront is also a welcome addition, a supe that will surely stir up controversy in the episodes to come. (Plus, Aya Cash!) And The Deep attempting to come to terms with what is making him violate and humiliate women is an interesting way for the showrunners to take on famous men and predatory behavior. His in-therapy sessions are some of the most engaging albeit uncomfortable scenes. Are you following along with The Deep’s story?

BB: You can’t be introduced to anyone worse than The Deep, who’s revealed to be a sexual harasser in the first season. Yet, he’s also in some of the funniest, most humanizing scenes (such as the aforementioned dolphin escape, or when he inadvertently becomes an accomplice to lobster murder), to the point where you have to remind yourself, “Wait, remember, he’s garbage.” Season 2 goes even deeper (pun intended) into his insecurities. The Deep is a good case study for how the show dives into the multiple layers of all the characters, even showing that the good guys aren’t all that good. You’re just left wondering who’s going to actually stop, look at what they’re doing, and ask, “Are we the baddies?” Really, how different is Homelander from Billy Butcher?

As far as The Deep, he even provides some of the early highs in Season 2, including another unfortunate encounter with an aquatic friend and a secret show-stopping musical number. What are the moments that you think people should watch out for? 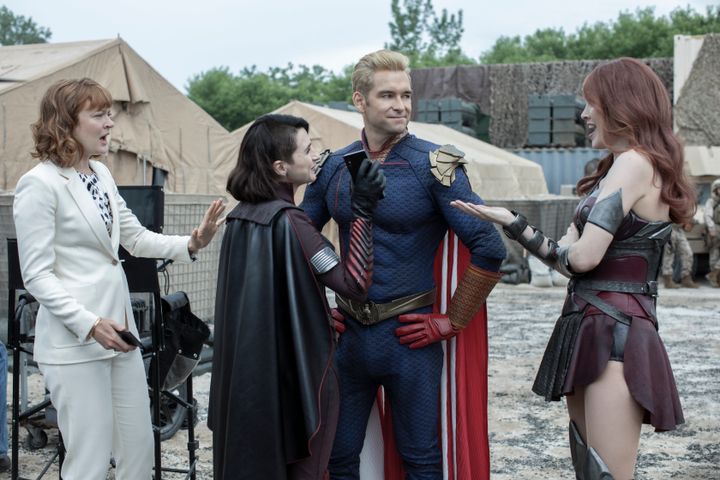 LB: The Deep does have a few standout moments this season (no spoilers here). But despite the humor surrounding his character, I never question his likability. He’s, like you said, trash. That’s what makes painting him as a “bad guy turned good” so compelling. And Chace Crawford plays up his stench well.

As for other highs of Season 2, Kimiko (Karen Fukuhara), aka The Female, is a force to be reckoned with. She’s a mix of Eleven from “Stranger Things” and an X-Men mutant, leading some of the best action scenes to date. And the storyline with her brother brings a new element to the series that I found really well done. I think fellow Boys Frenchie (Tomer Capon) and Mother’s Milk (Laz Alonso) get their dues too, no?

BB: Like onions and Shrek, everyone here has layers. As the show later gets into, there’s a deeper reason behind Frenchie’s love for Kimiko, a connection she’s not always down with. And like you said earlier, Homelander is scary. In almost every scene, you’re just waiting for him to explode, or possibly make other people actually explode. Then there’s Stormfront, who was inspired by a male Nazi character in the comics. Despite those comic origins, she’s introduced as a fun, young, social media star coming in to push back against the status quo. Homelander clearly has a problem with her in some released footage, but will the embodiment of patriotism always feel that way about her? Especially considering she’s a potential Nazi sympathizer?

What are you trying to say here, “The Boys”? Actually, never mind. It’s pretty clear what you’re saying, considering it’s 2020 and people are wearing swastika face masks to Walmart.

LB: There’s no doubt “The Boys” takes aim at a slew of topics centered in our 2020 day-to-day: white supremacy, gender bias, cancel culture, Scientology and mainly Trump’s America. (If the pandemic had happened before filming, I’m sure it would’ve reared its ugly head, as well.)

The show holds a mirror up to the entertainment business, particularly superhero franchises and the marketing strategies that surround each Marvel or DC film. It’s twisted, clever, uber-violent and, frankly, hysterical. I nervously laugh sometimes, out of pure shock of what they’re able to toss into these scripts!

BB: Totally. It seems like the goal of “The Boys” is to just call out everyone, from celebrities who talk about championing social causes to fans who cheer for comic book movie lines that are kind of cringeworthy. (No, not you, “Martha.” I’m talking about … uh … something else.) No one’s exempt. Everything is terrible. There’s even a press junket where entertainment journalists repeat the same tired questions to Starlight and Stormfront, asking, “Do girls make better heroes?” Personally, that made me wince and ask myself, “Oh, God. Have I sounded like that before?” But also, “Wait, do they make better heroes?”

Wash your hands, because “The Boys” is out to make everyone do a facepalm. 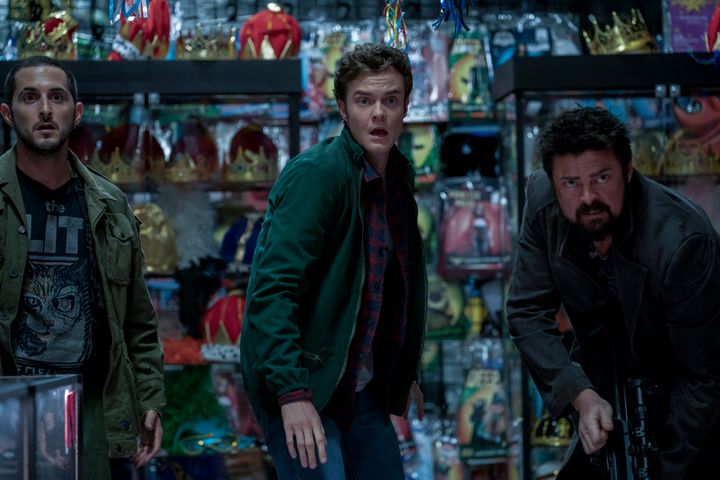 So, Should You Watch It?

LB: If you’re a fan of Season 1, of course you should! I think this new batch of episodes only enhances the show’s goals. And for those who haven’t hopped on “The Boys” train yet, there’s no better time to catch up than in quarantine. It’s a whale of a time!

BB: Even if you’re not a fan! At this point, I’ve binge-watched “Floor Is Lava,” “Too Hot Too Handle,” “Million Dollar Beach House” and a ton of shows that I’m even too ashamed to mention. Your choices are basically watch “The Boys” or sit indoors staring at the wall. Definitely watch “The Boys.”