The man-made sun in Oxfordshire that could power our planet

Hundreds of times every month, a British scientist sitting in a high-tech control room in an industrial park in the Thames Valley near Didcot clicks his computer mouse.

Each time he does so, a high-energy beam of subatomic particles is fired into a dark, swirling cloud of superheated hydrogen gas, known as a plasma, contained within a spherical steel tank about 6 ft in diameter.

The plasma immediately sparks and glows and at that point has just become the hottest place in the solar system, hotter even than the core of the sun — that is to say, more than 15 million degrees Centigrade.

Only a system of immensely powerful electromagnets prevents the vessel containing the plasma from being vaporised instantly.

The scientist, who works for the high-tech start-up Tokamak Energy, is part of a team of world-leading experts trying to recreate nuclear fusion, the process that makes stars burn — for the fusion of two atoms of hydrogen to make one of helium, releases vast quantities of energy.

Harnessing fusion on a commercial scale has been the energy technology sector’s holy grail since the 1930s.

Now, that goal is no longer sci-fi fantasy but fast approaching science fact. And the good news is that Tokamak, a British company, is a world leader in the race to develop a commercially viable fusion device that will revolutionise the energy-generation sector. 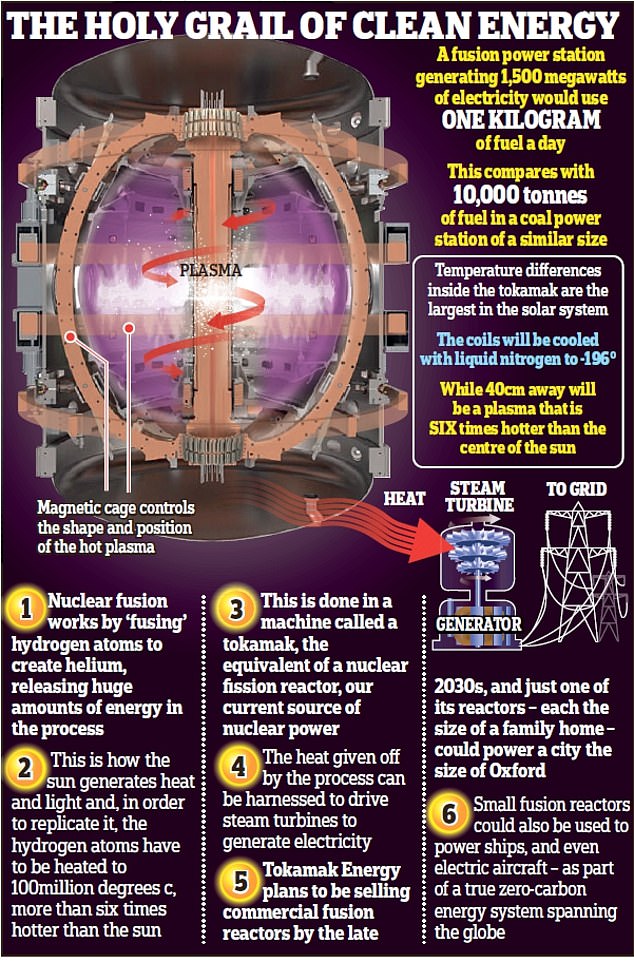 Unlike a conventional nuclear fission reactor — in which energy is released by splitting atoms of uranium — a fusion power plant could never melt down like the reactor in 2019’s horrifying true-life TV drama about the 1986 Chernobyl disaster, which released a radioactive plume that has rendered the surrounding countryside unsafe for human habitation for decades.

A fusion reactor that malfunctioned would simply get cold, as the fusion process fizzled out. Moreover, a fusion reactor’s fuel would be both inexhaustible and unimaginably cheap as its raw material, hydrogen, can be derived from sea water.

It would also have incalculable environmental benefits.

For a start, it would sound the death knell for the internal combustion engine and the noxious greenhouse gases it expels.

And smaller, portable versions could even be used to power airliners and container ships, cutting out another major source of CO2 emissions. The heat produced by a fusion reactor can be tapped by a device —invented by a UK Atomic Energy Authority team, also based in Oxfordshire — called a divertor. This would be used to heat steam to drive a turbine, and so generate electricity that would power propellers.

The electricity that fusion produces would not only be truly zero carbon but — unlike that from wind and solar panels — immune to changing weather.

So much for the dream. But as fusion sceptics love to jest, however great the scientific effort and apparent progress, power from fusion always remains at least ’50 years away’.

According to Tokamak Energy’s co-founder and vice chair, Dr David Kingham, that dismissive claim is no longer true. 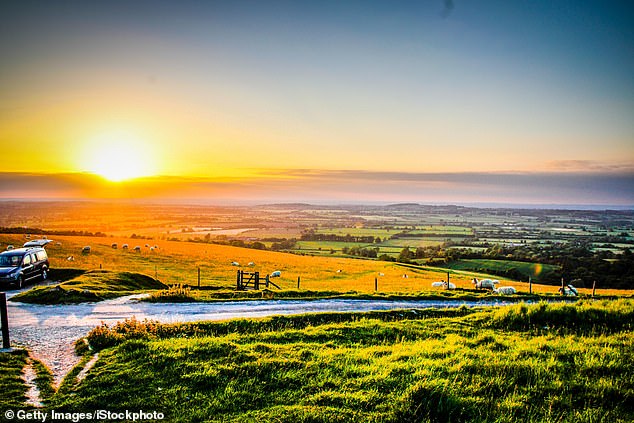 Plasma in a fusion reactor in Oxfordshire can become hotter even than the core of the sun — that is to say, more than 15 million degrees Centigrade [Stock image]

Within a few weeks, he says, the current Didcot reactor — known as the ST 40 — will pass a major milestone, when its plasma reaches a staggering 100 million degrees Centigrade — more than six times as hot as the heart of the sun.

He insists that the company is on track to deliver the world’s first commercial nuclear fusion power plants by the late 2030s.

Not just one, but many of them, to be ‘deployed globally’ using science pioneered in Britain and made on a British production line, each machine capable of a steady output of 150MW — enough to power a city of 150,000 people, such as nearby Oxford.

Dr Kingham’s optimism is being taken seriously, by both governments and investors. The Business, Energy and Industrial Strategy Secretary Kwasi Kwarteng is to visit the Didcot plant today, and will announce that Tokamak — supported to date by £150 million from private investors and a recent £10 million government grant — is about to expand dramatically.

Its current workforce of 165 — which includes top scientists from Britain and around the world — is to double by the end of next year, as it opens new laboratories and workshops.

Yesterday Dr Kingham gave the Mail an exclusive tour of the company’s plant and 100 million-degree reactor, a steel vessel twice the height of a man surrounded by an array of pipes, cables and sensors. As we walked, he explained that key to the firm’s success are two critical innovations.

Other reactors use electromagnets to contain the plasma. They are made using superconductors — materials that offer no resistance to electric current when cooled to close to absolute zero, minus 273c.

But sustaining such low temperatures takes an enormous amount of power — so much so that it is likely to consume much of the reactor’s output.

To combat this problem Tokamak Energy has developed and patented high temperature superconductor magnets which consume only a tenth as much energy, using a substance known as Rare Earth Barium Copper Oxide.

Its second innovation is the shape of the reactor — like a cored apple. Earlier designs have been hollow doughnuts. This change makes the firm’s designs far more efficient. 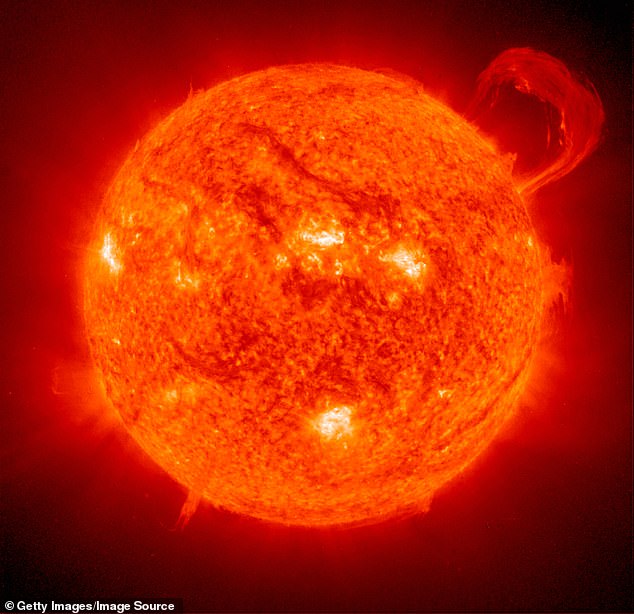 ‘Combining high temperature superconductors and a spherical reactor has huge advantages — and in the end, it will make this form of energy significantly cheaper,’ says Dr Kingham.

Several other private sector rivals are also racing to develop commercial fusion energy, including the U.S. aviation giant Lockheed Martin and Amazon’s Jeff Bezos, who recently announced plans to build his own facility in Oxfordshire.

There are also national and international state-run projects, such as ITER, an experimental reactor being built by a consortium of 35 countries — including Britain — in the South of France.

However, ITER is enormous and unwieldy. Construction started in 2007, and it will not start operating until the late 2020s. Its site is the size of 60 football pitches. Tokamak Energy’s planned production model will be the size of an ordinary house, and take months, not years, to manufacture.

Ahead of his visit today, Mr Kwarteng called Tokamak Energy a ‘trailblazer’, saying it was already demonstrating that fusion had ‘remarkable potential as a potentially limitless, clean and safe source of energy’ — and could ‘cement our position as a global science superpower’.

Not bad for a start-up based just outside Didcot.