The missing 1964 Archibald portrait that should have won the prize

In 1964 when young radical Reverend Ted Noffs opened the Wayside Chapel, an artist who worked with him at Kings Cross, Tiiu Reissar painted his portrait for the annual Archibald Prize.

It was before he was charged and acquitted three times for heresy by his church, but the then 38-year-old Methodist minister was already making waves among Sydney’s more conservative Christians for his outreach on the streets of the city’s red light district. 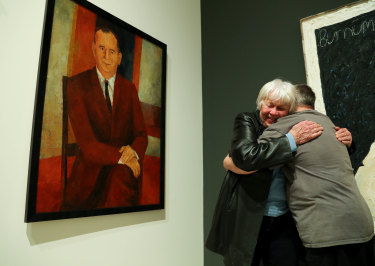 Artist, Tiuu Reisser, meets Wesley Noffs again, 50 years since she was his art teacher, and 57 years since she painted this portrait of his father Ted Noffs for the 1964 Archibald Prize. Credit:Janie Barrett

“The Wayside Chapel was a place for misfits,” recalls Reissar, an Estonian artist who migrated to Australia with her family after World War II.

“Ted used to work in his office quite late but every time he came into the coffee shop it was like a ray of sunshine – a light came on in the room,” she said. She was 28 at the time, and vowed to try to capture that special light in a painting she did in his office, which she submitted for the portrait prize before heading to London in January 1965.

For the first time in Archibald history, the prize was not awarded in 1964, as the Art Gallery of NSW trustees felt that no submitted entry was worthy enough to win. 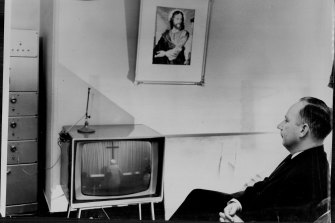 The Reverend Ted Noffs watches a closed circuit screen at the Methodist Wayside Chapel from his office, in 1964, where artist Tiiu Reissar painted him for the Archibald Prize.Credit:Ray Sharpe

“Me and Rembrandt, we both are interested in bringing out the inner qualities of a person not the superficial.”

“I remember the fuss about the painting and the disappointment Dad didn’t win, but I never saw the picture in person,” recalls Ted’s son Wesley Noffs, who was 11 in 1964.

On her return to Australia in 1967, Reissar became an art teacher at the National Art School and went to the gallery to collect the Noffs painting, intending to donate it to the Wayside Chapel but instead took it to her Hazelbrook home.

There it has remained gathering dust and mould for 53 years – but for a foray once to Canberra’s National Portrait Gallery – until last year when Natalie Wilson, the curator of the Archie 100 tracked it down. 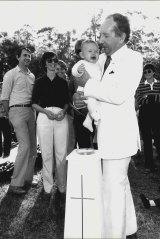 Ted Noffs of the Wayside Chapel performs a naming ceremony in a flared white suit in 1982.Credit:Julian Zakaras

Thanks to the SBS Estonian language service, Wilson used a variety of social media sleuthing to find the now 85-year-old Reissar who was in Victoria during the 2020 COVID-19 lockdown and the portrait she wanted for the retrospective.

A friend in the Blue Mountains was able to retrieve the painting from the artist’s Blue Mountains studio, it was reframed and restored, and this week shown to the Noffs family for the first time in an emotional reunion with the artist, at the Art Gallery of NSW.

“She’s captured his big ears perfectly – the rest of the family had small ears,” Mr Noffs, now 68 said. “Dad had just taken off his dog collar because it was too intimidating for the Beatniks and the people in the Cross he was tending to when Tiiu did this portrait.”

Reissar had also taught Wesley Noffs during his time as a student at the National Art School from 1970-72, but the two had lost touch – just as the Art Gallery had lost track of many of the 32,000 Archibald entries over the course of the prize’s 100 years. 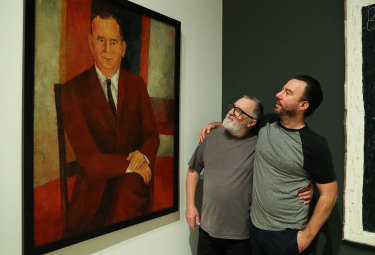 Three generation of Noffs: Wesley Noffs (centre) with a portrait of his father Ted and son Matt (right) and the Art Gallery of NSW.Credit:Janie Barrett

Wesley’s son Matt Noffs, now chief executive of the Noffs Foundation said the portrait of his grandfather captured the essence of the man he knew but in a more conservative era of suits and slicked back hair.

“He later became better known for his shock of hair and white suits with flairs in the ’70s, his clothes became more radical as he did too when the church charged him with heresy,” says Matt.

“It is a good portrait – I think it should have won but it was too modernist for the time,” says Reissar now, who also painted a portrait of Darcy Dugan, during the time the convicted bank robber and prison escapee worked as a counsellor at the Wayside Chapel.

“I couldn’t paint Darcy because I couldn’t communicate with him the way I could with Ted who I knew well and admired because he was a true Christian,” she said.

“Me and Rembrandt, we both are interested in bringing out the inner qualities of a person not the superficial – a portrait is a communication between the artist and the subject … something will come out of the sitter’s subconscious through me and it goes on the canvas – that’s a successful portrait.”

The Noffs painting will feature in the Archie 100: A Century of the Archibald Prize which opens Saturday at the Art Gallery of NSW.