The former lead singer of Skid Row, Johnny Solinger, has died just a month after telling fans he was suffering from liver failure. Solinger died on June 27 at the age of 55 with Skid Row’s official Instagram announcing how “saddened” they were to hear of his passing. Alongside a photo of him holding the mic, the band wrote, “We are saddened to hear the news of our brother Johnny Solinger. Our thoughts are with his family, friends and fans.”

The caption continued with, “Godspeed Singo. Say hello to Scrappy for us” — a nod to Solinger’s late grandfather, Willard Jess “Scrappy” Smith, whom Solinger paid tribute to with his 2014 solo album “Scrappy Smith,” per Deadline. Skid Row signed the message “much love” next to each of the band member’s names: Rachel Bolan, ZP Theart, Snake Sabo, Rob Hammersmith, and Scotti Hill.

Solinger’s wife Paula Marcenaro also released a statement on Facebook, confirming he had lost his battle with liver failure: “Johnny passed. I was holding his hand. He went in peace. Thank you all,” per TMZ. She also posted a quote to her Instagram Story, which suggested she “will not get over” his death and “will grieve forever.” A GoFundMe set up prior to his death — which raised $16,000 for his medical bills — will now be transferred to assist with funeral arrangements.

Johnny Solinger organized a GoFundMe since he couldn't afford treatment 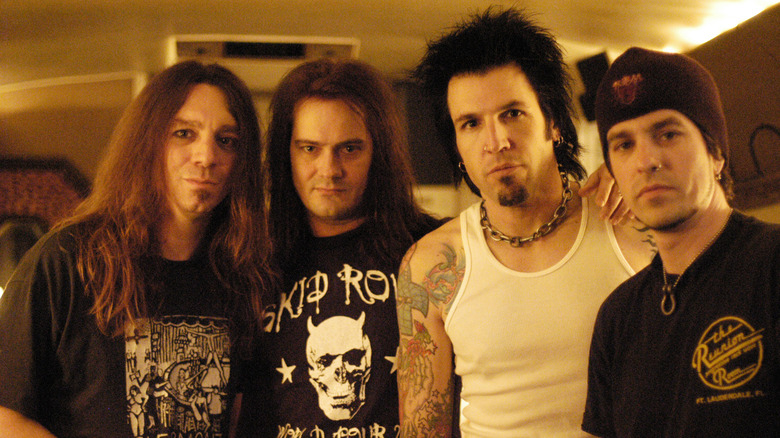 Johnny Solinger may have left Skid Row in 2015, but the former lead singer had plenty of supportive fans. In May, Solinger created a GoFundMe, sharing he was diagnosed with liver failure and the “prognosis is not so good,” per 9Honey. He wrote, “It is with a heavy heart I must let everyone know what’s going on with me and my health. I have been hospitalised for over the last month. I have been diagnosed with liver failure.” Solinger welcomed any donations and explained that like “most musicians,” he didn’t have health insurance and “it’s very difficult to get proper care without it.” The crowd-funding page gained traction among fans and raised over $16,000.

The 55-year-old joined the popular U.S. rock band in 1999 (which hit its stride back in the late ’80s and ’90s), replacing their original singer Sebastian Bach, per news.com.au. Solinger featured on several Skid Row albums, including “Thickskin,” “Revolutions per Minute,” “United World Rebellion,” and “Rise of the Damnation Army,” per TMZ. He then said farewell to the band in 2015, with Tony Harnell taking over.

Following his death, a friend of Solinger’s, Brian Lawrence, took over the GoFundMe and reassured fans their charitable donations will now go toward the funeral: “I want to personally thank all of you who donated during his treatment. Y’all are a blessing and he was so moved by the outpouring of love. Thank you and God bless.”