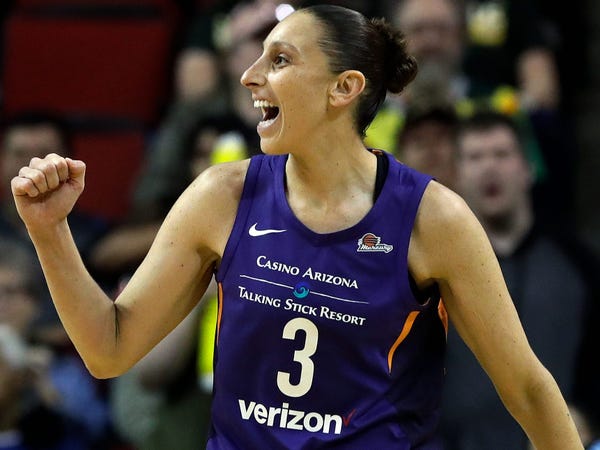 Incoming WNBA players get younger and more talented by the season, but for 16 years, one constant has remained: Diana Taurasi.

The 38-year-old is the WNBA's all-time leader in points, field goals, three-pointers, and free throws. Now, in her 16th season, Taurasi has led the Phoenix Mercury to their eighth consecutive playoff berth, making her a serious contender to be the WNBA's 2020 MVP.

As the second-oldest player on a WNBA roster this season, Taurasi has defied the expectations that come with age by averaging 19 points, 4.4 rebounds, 4.6 assists, and 3.3 three-pointers per game in the league's bubble in Bradenton, Florida. Those stats are all the more impressive given that she's playing alongside an extremely limited roster: The team is down to nine healthy bodies after losing guard Bria Hartley, forwards Alanna Smith and Jessica Breland, and six-time All-Star Brittney Griner.

Taurasi also missed the majority of the 2019 season because of a debilitating injury, subsequent back surgery, and the ensuing recovery process.

But now Taurasi is in peak form. Across the league, she ranks fifth in points per game, fifth in free-throw percentage, and seventh in assists per game. Plus, somewhat surprisingly for a guard, she's 26th in blocks per game and 29th in rebounds per game.

"As far as the things that I've always been able to do, I feel like I can still do them, obviously," Taurasi said during a media call last month. "When I can get to the basket, it just opens up the game for our team in so many ways. That's one thing I'm still very cognizant about is getting to the rim, getting to the paint, and getting other people involved."

In Taurasi's storied WNBA career, she's only won MVP once

"Nobody shoots the ball as well as Diana Taurasi," Mercury head coach Sandy Brondello said on Thursday after Taurasi dropped 27 points in a win over the Indiana Fever. "Sometimes I'm just like 'Okay, that's ridiculous how great a shooter she is and how far she can shoot out' but she's done this her whole career… I think everyone knows she's going to take threes but she still gets so many threes a game. It's mind boggling."

Although Taurasi has been impressive all season, she more seriously inserted herself into the MVP conversation recently. While wearing Kobe Bryant's No. 8 jersey on his birthday, Taurasi erupted for a season-high 34 points, shooting 7-of-13 from beyond the arc. Three years before Bryant's death, he christened Taurasi "White Mamba" after watching her overtake Tina Thompson's all-time WNBA scoring record in 2017.

She's lived up to the moniker: In the game on Bryant's birthday and the following four contests, Taurasi averaged 26 points and a whopping 5.6 threes per game. She was 48.7% shooting from the floor, with an average of 5.6 rebounds and 4.8 assists per game. She also hit a WNBA-record 28 threes in that span.

The Phoenix social-media accounts are not-so-subtly making a case for Taurasi to be this year's MVP, even going so far as to change the team's Twitter name to #MVDee.

But despite being widely considered the league's greatest player of all time, Taurasi has only earned MVP honors once — after leading the Mercury to the 2009 WNBA championship. She hasn't been coy about her belief that a single MVP award is not enough; on Megan Rapinoe and Sue Bird's Instagram Live show "A Touch More," Taurasi acknowledged during the offseason that she thinks she was slighted at least twice.

"How many [MVPs] should you have won?" Bird asked.

The Mercury have two regular-season games remaining before the the playoffs. Taking home the chip is undoubtedly the top concern for Taurasi, but if she extends the tear she's currently on, she may find herself with an additional piece of hardware to put on her mantle.