‘There is no pathway’: Call for boys to play netball in schools

Men’s Netball NSW vice-president Brent Ferguson has called for the male version of the sport to be played in high schools to bring about greater recognition and provide continuity for players.

Netball ACT announced on Wednesday that it would formally recognise men’s netball as a member of the governing body, six years after NSW. 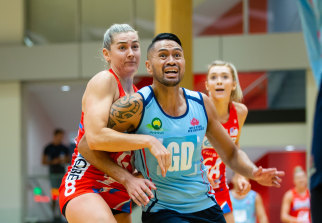 The NSW Swifts played a pre-season game against the NSW men’s side in March.Credit:NSW Swifts Media

The Silver Ferns played against the New Zealand men’s team in June in what is believed to be a world first. International netball is strictly sanctioned as women only.

“We’ve never, ever wanted to dominate the sport in terms of sponsorship or take anything away from the women’s game, because we understand that this sport has had a fantastic foundation over the years,” Ferguson said.

“As we’ve seen with AFL and soccer and cricket, women are successfully going across into what traditionally would be a male-dominated sport . . . we’ve seen the success the girls are having and it’s certainly growing the fan base of those codes.”