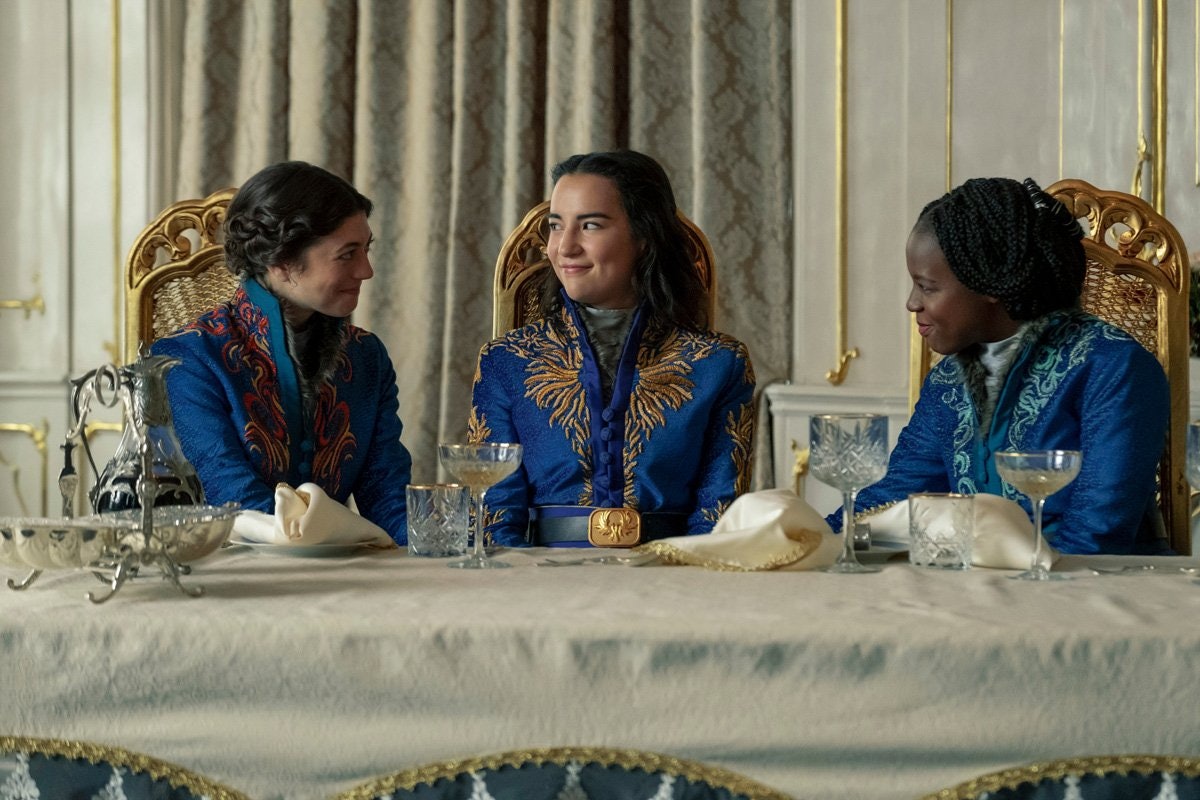 Now that Leigh Bardugo’s beloved Shadow and Bone trilogy has been adapted into a series on Netflix, it’s easier than ever to get lost in the Grishaverse. You may have already marathon-watched all eight episodes the first weekend it dropped on the streaming platform, but you have plans to rewatch it all again from the beginning. Whether it’s your first time or one millionth time, you need some Shadow and Bone-inspired recipes to make the perfect Netflix and chill snacks.

There is so much to love about the Shadow and Bone series from the characters and their relationships to the fantastical world of Ravka. Pulling inspiration from the book series and Netflix show, some home chefs have put together delicious recipes you’ll want to try out for yourself. There are savory dishes like The Unsea fish tacos and even cocktails named after your favorite characters. You just have to decide what you’re in the mood for, and find a Shadow and Bone-inspired recipe that’ll satisfy your cravings. While these six recipes are great for snacking on while watching the show, you could also plan out an entire Shadow and Bone dinner date. The Mal to your Alina will definitely appreciate all the hard work you put in.

Chef and writer Elle Jauffret was inspired a few years ago to come up with some recipes from the Shadow and Bone novels. One of those recipes is this quail roasted in honey dish, which sounds like a medieval delicacy. If you’ve never roasted some quail before, here’s everything you need for this recipe:

Take your ingredients and create a rub to add to your quails before putting them in the oven at 500 degrees. Cook for about 10 minutes and then cover with any remaining spread before cooking for an additional 10 to 15 minutes. Once it’s all golden brown, you’ll have some delicious roasted quails with sweet honey.

Jauffret actually has an unofficial Shadow and Bone cookbook online that you can check out for even more free recipes. One of which is The True Sea Fish Tacos inspired by the Unsea. What you’ll need for this tasty dish are:

For your tacos, you’ll want to start making the slaw first using the sour cream, lime juice, red cabbage, and salt and pepper. While your fish is cooking at 350 degrees for about 10 minutes, warm up your tortillas. When the fish is cooked and cut into strips, you can start assembling your tacos with the slaw, fish, cilantro, and chives.

For dessert, serve up some Butter Week Almond Cake. In Alina’s own words, Butter Week had been the "best time," and we can totally understand why. Think of all the bread, cheese, and sweets.

You won’t need too much for this recipe. Simply:

Combine everything together to add to the puff pastry, and fold it all up nicely. Bake for about 35 minutes at 350 degrees, and you’ll have a delicious treat to snack on.

Another sweet dish from Jauffret that you can make are these Malenchki dumplings (aka "little ghosts"). They’re sweet dumplings served with peaches, which can be found in Ravka. All you need for this dish are:

Combine all your dry ingredients, then add in your milk. From there, you’ll drop your spoonful of batter into simmering cinnamon and water for about 15 minutes. Once your dumplings have puffed up, it’s time to serve with your sliced peaches. This is actually great for any summer hangs in the backyard. 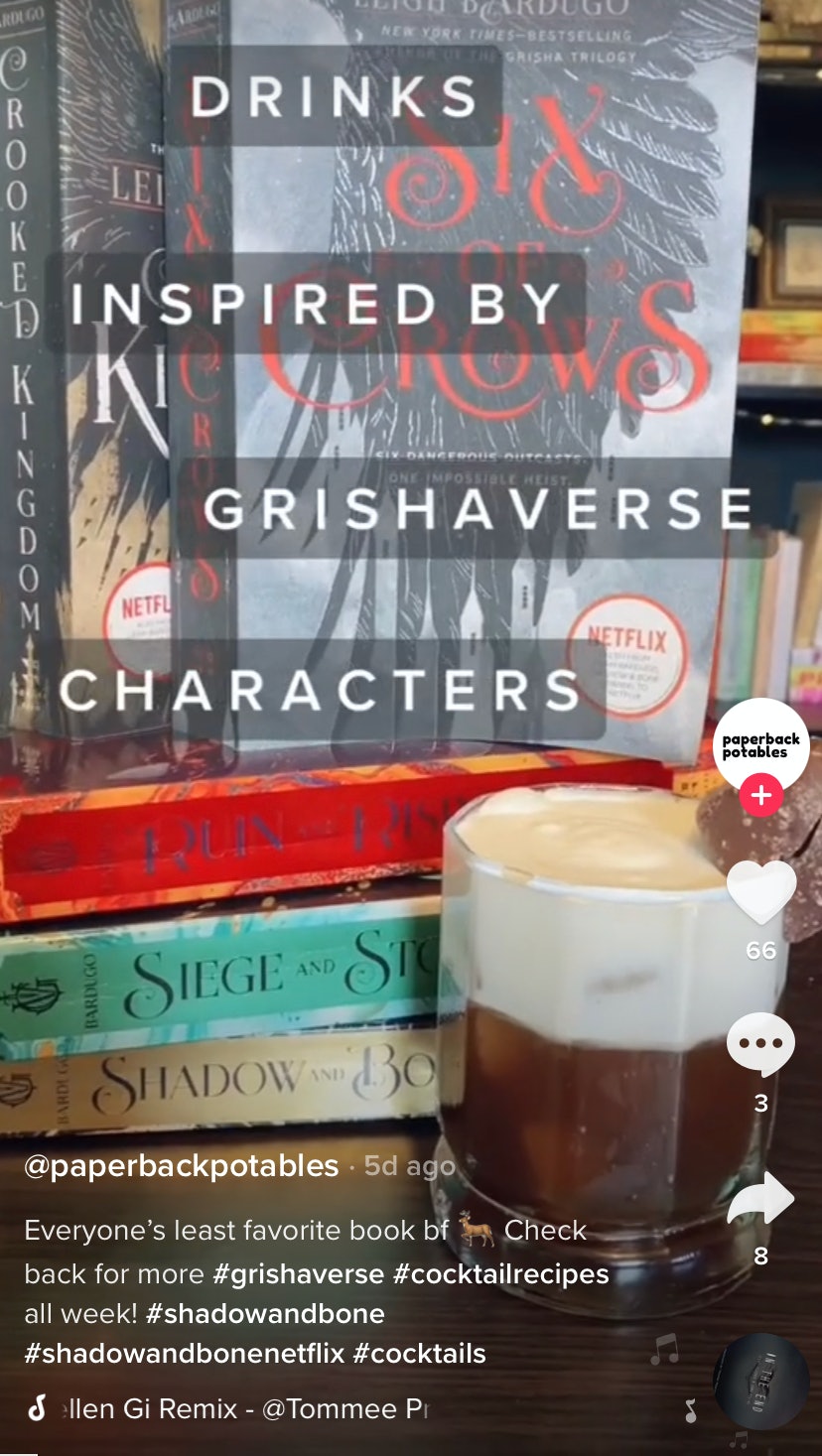 If you’re Team Mal (and are 21+), you can make yourself this Mal-inspired cocktail from TikTok. In TikToker @paperbackpotables’ recipe, combine the following in one glass:

It’s basically a Blushin’ Russian cocktail, which is perfect as the Grishaverse is inspired by a lot of Russian culture.

Just like the Butter Week Almond Cake, this recipe for bird-shaped rolls is inspired by the celebration in Shadow and Bone. This is probably the most Instagram-worthy of the dishes on this list, because it’s actually sweet bread that looks like an adorable bird. Here’s what you’ll need:

The hardest part will be trying to get the perfect bird shape, but Fiction-Food Café gives you some step-by-step instructions on how to assemble your bread knots perfectly.