‘Throw the book at them’: Health Minister addresses Aspen controversy

Federal Health Minister Greg Hunt has blasted the behaviour of a couple accused of flouting quarantine advice after returning from an exclusive cocktail soiree in Aspen, Colorado, with COVID-19.

The Age and The Sydney Morning Herald revealed last week that dozens of infections can be traced to a group of Australians skiers visiting the Colorado resort of Aspen, some of whom failed to place themselves into self-isolation even after testing positive. 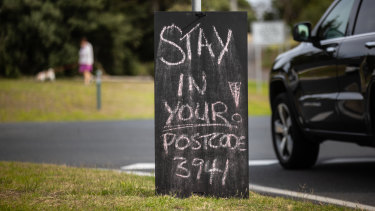 A pointed message to visitors spotted on a sign in the seaside town of Rye on the Mornington Peninsula.Credit:Simon Schluter

A Melbourne couple infected with COVID-19 at the party, who were supposed to be in quarantine at a property in Portsea, were the subject of repeated police complaints after they allegedly flouted advice to self-isolate and visited shops in nearby Sorrento and played golf.

"Some people think that the laws and, even more importantly, the notion of socially responsible behaviour does not apply to them," Mr Hunt said in an exclusive interview on Tuesday.

"In my view, that's a disgrace … The police should feel free to throw the book at them."

Many of the most affluent suburbs in Melbourne and Sydney now have the highest rates of infection. Victoria's Mornington Peninsula, where many of the Aspen crowd sought refuge, has also recorded more than 35 cases, which has triggered a fierce backlash from permanent residents on the coast.

Mr Hunt stressed that while the couple had a holiday house in his electorate of Flinders, which covers the the Mornington Peninsula, he did not know who they were.

He added that "the overwhelming majority of Australians are doing the right thing".

The couple, whom The Age and The Sydney Morning Herald have decided not to name for legal reasons, returned to Melbourne on March 6 and four days later were informed by Victorian health authorities that they were at high risk of infection because of the outbreak in Aspen. 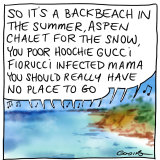 Australian authorities had issued an order at the end of January for people to self-isolate for 14 days if they had been in contact with a coronavirus case, but mandatory self-isolation for all overseas travellers was not enacted until March 15.

The couple were asymptomatic and did not self-isolate immediately on their return from the US. They were tested on March 15 at Frankston Hospital, a source said. The woman was the first to test positive to COVID-19 and her partner tested positive two days later. The two were advised to isolate from the public.

Mr Hunt said the requirement to quarantine for 14 days after overseas travel was necessary "to save lives" and that "people that breach the rules are putting the lives of other people at risk".

"I don't care if you are rich or famous or anything else, these laws and these rules apply to everybody," Mr Hunt said.

The unnamed couple were among about 40 people to attend a cocktail party on March 2 by Flexigroup founder and Liberal Party powerbroker Andrew Abercrombie and wife Shadda.

Mr Abercrombie owns two adjoining condominiums in the exclusive resort, and the cocktail party is a highlight of the annual trip.

Despite only running from 7pm until 9pm, and unbeknown to the hosts, the lavish event became a hotbed of transmission, both in Aspen and back in Australia.

Mr Abercrombie issued a statement saying he had been found to be coronavirus-free after being tested twice. He was also spotted at Portsea last weekend.

The Age does not suggest Mr Abercrombie did anything wrong, or had knowledge that his guests may have flouted isolation regulations or protocols.

A source close to Mr Abercrombie said he wasn't aware that any of his guests had been infected until days after the gathering.

Another Melbourne woman, who was also infected with COVID -19 while visiting Aspen and the nearby resort of Vail, attended a 21st birthday party where at least six people later tested positive the virus.
Many guests who attended the party in Malvern were furious they were not warned earlier about the heightened risk of infection.

A mass outbreak in Noosa on Queensland's Sunshine Coast has also been linked to another business figure who had recently returned from Aspen and attended a private function at Sails Restaurants on March 14, when 24 guests, including four staff were struck down with the virus.

The rapid spread of the disease has caused ructions and recriminations among the eastern seaboard's wealthiest communities, where resentment continues to simmer over the reluctance of some holiday makers to self-isolate upon their return from the US.