Traveller mother reveals challenges of making sure her daughter, 2, always looks her best so that people will think she’s ‘well looked after’ as she tries to coax her into a party dress and heels for a photoshoot

A traveller mother reveals the struggle of raising her daughter according to tradition on tonight’s Here Come the Gypsies, explaining the pressure to make sure her child is always dressed to the nines.

Lavinia, a Romani gypsy mother-of-two who lives in Dorset, explained that it’s important for traveller women to always look their best, regardless of age, and that includes her two-year-old daughter Valentina.

‘Gypsy girls are more homebound,’ the mother-of-two said. ‘They help their mum, clean up and just be more homely, they learn to cook from a young age.

‘Part of the gypsy culture, they like to be seen out,’ she continued, adding that if a girl looks her best, people will say that she’s ‘well looked after’.

But getting Lavinia to adhere to that wordlview is mean feat, with her mother struggling to get her to dress up in a frilly frock and heeled sandals for a beach photoshoot in tonight’s epsiode, airing at 9pm on Channel 5.

The struggle started with Lavinia kneeling on the floor, begging Valentina to get dressed, while her daughter paraded around in a nappy.

‘Come on, you come to me quickly,’ she started, while Valentina grunted.

When her first command didn’t receive an enthusiastic response, Lavinia tried to entice her daughter with a shiny yellow bow and silver glittery shoes with a block heel.

‘Should we put this in your hair? Oooh,’ she said, showing the bow to Valentina, prompting her daughter to let out a scream.

‘It takes a long time for us to get ready, especially when she needs something nice on, should I say,’ the mother-of-two told the camera crew. 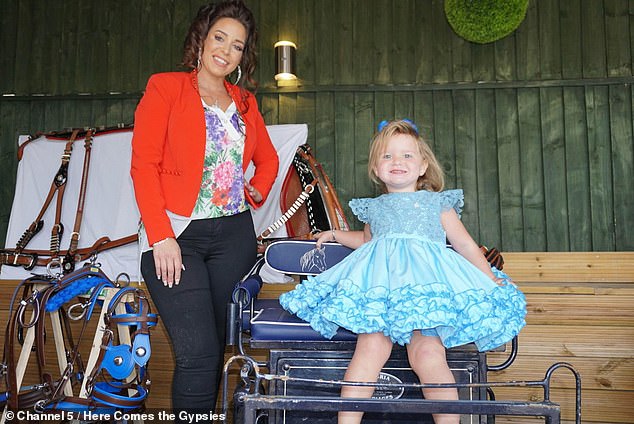 Traceller mother-of-two from Dorset Lavinia, left, had to coax her two-year-old daughter Valentina into wearing a party dress for a photoshoot on tonight’s Here Come the Gypsies, airing at 9pm on Channel 5

The toddler was more interested in finishing her lunch – a half eaten cheeseburger, and started to cry when her mother propped her on her lap to put her in the yellow and gold dress.

‘It’s not the end of the world, Valentina,’ Lavinia said, trying to soothe her.

‘We’re going to have some lovely photo down at the beach,’ she added, talking to her daughter, who threw the remnants of the cheeseburger on the floor.

‘You’re cheeky,’ Lavinia admonished her daughter, showing her what she had done.

The mother-of-two explained the photoshoot was important for her family, because it’s their way of making memories. 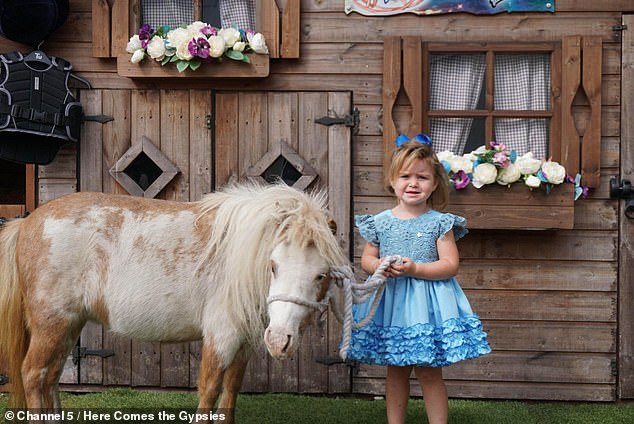 Valentina, who is already a beauty pageant competitor, and is pictured here with her pet mini horse, was not really interested in the glitzy dress her mother wanted her to wear

‘She’s two going on 22,’ she joked, talking of Valentina.

A bit later, Lavinia tried to get Valentina’s help to prepare her for her photoshoot, handing her daughter the yellow bow, saying: ‘You’re gonna hold it for mommy?’

Instead, the two-year-old, looking unconvinced, unceremoniously threw the bow on the floor.

The same happened with a glittery silver shoe, which Valentina sent swinging, prompting Lavinia to tell her: ‘You’re a devil.’ 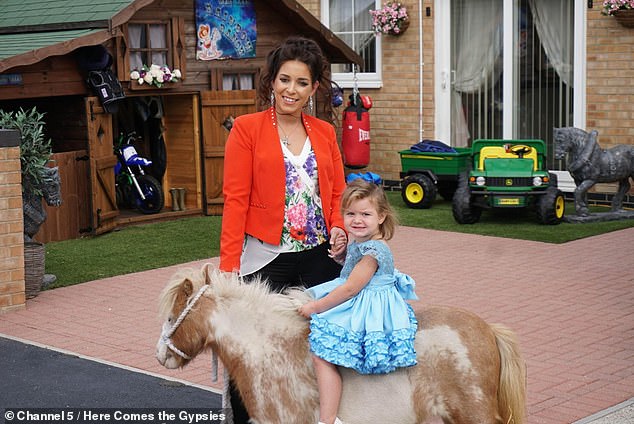 Lavinia, a Romani traveller who lives in Dorset with her husband Danny, her son Young Danny, eight, and her daugther Valentina, two, pictured, says traveller women pay a lot of attention to their looks in order to ‘outdo’ each other

All ended well for the mother-of-two, who finally managed to get her daughter in the outfit in time for the photoshoot, which was taking place on a local beach.

There, a photographer hired for the occasion tried to catch Valentina’s attention while the toddler frolicked in the sand.

But once again, the young girl seemed more interested in doing her own thing, running to the waves in her expensive outfit.

‘He’s trying his best, bless him,’ she added, as her son tried to capture his sister’s attention.

Passers-by who had come to the beach to get some sun laughed at the scene, with Lavinia trying to get her daughter to pose for the pictures.

‘I’m panicking because I feel I won’t have any nice photos because all she’s doing is digging up the sand and she’s picking up the seashells.

But the professional photographer didn’t disappoint and managed to capture some good pictures.

‘Oh, you did get some good ones, ‘ a reassured Lavinia said.

Speaking to the camera, Lavinia said: ‘I didn’t even think I would get anything from what I was looking at. The pictures he’s actually got capture her character so well, I’m so over the moon.’

Here Come the Gypsies airs tonight at 9pm on Channel 5.