As Congress readies to reconvene next week, the spotlight returns to stalled stimulus negotiations after the president’s executive action nearly a month ago on unemployment benefits resulted in a half remedy at best.

Since signing his memorandum on Aug. 8, only seven of the 44 states approved for the Lost Wages Assistance Program (LWA) have started distributing the extra $300 or $400 in benefits to the 27 million jobless Americans receiving unemployment insurance.

Read more: Here’s what you need to know about unemployment benefits eligibility

Other problems exist, too, including future funding and stricter eligibility requirements that have limited the effectiveness of the memorandum and underscore the need for a larger effort.

“Nearly a month later, we’ve got six to seven states paying out,” Michele Evermore, a senior policy analyst at the National Employment Law Project told Yahoo Money. “It’s really just best if Congress gets back to the table as soon as possible.” 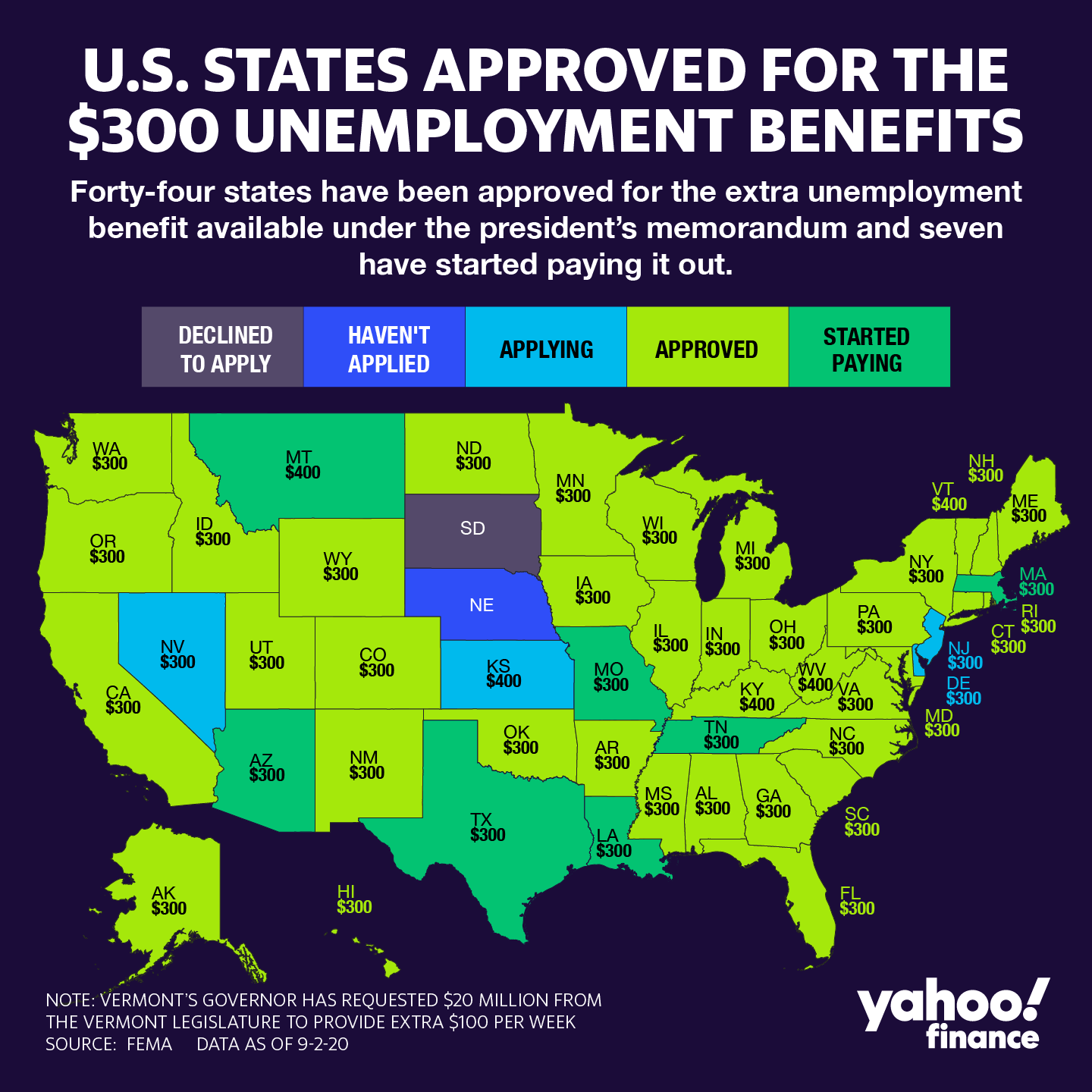 ‘It was very damaging to the negotiations in Congress’

“We’d like to extend enhanced unemployment and we’d like to send out more economic impact payments,” Mnuchin said during a hearing on the coronavirus crisis on Tuesday. “Those have both been critical to the economic recovery.”

But Congressional negotiations on the next stimulus package have been on hold since mid-August when Congress went into recess. While negotiations are expected to begin after Labor Day, Republicans and Democrats still disagree on how much the next package should be worth and on the future of key provisions — including unemployment benefits.

So far, Republicans proposed extra benefits of $200 a week through September and then ultimately transitioning to unemployment benefits that replace only 70% of wages, while Democrats support reinstating the $600 weekly bonus from the CARES Act. 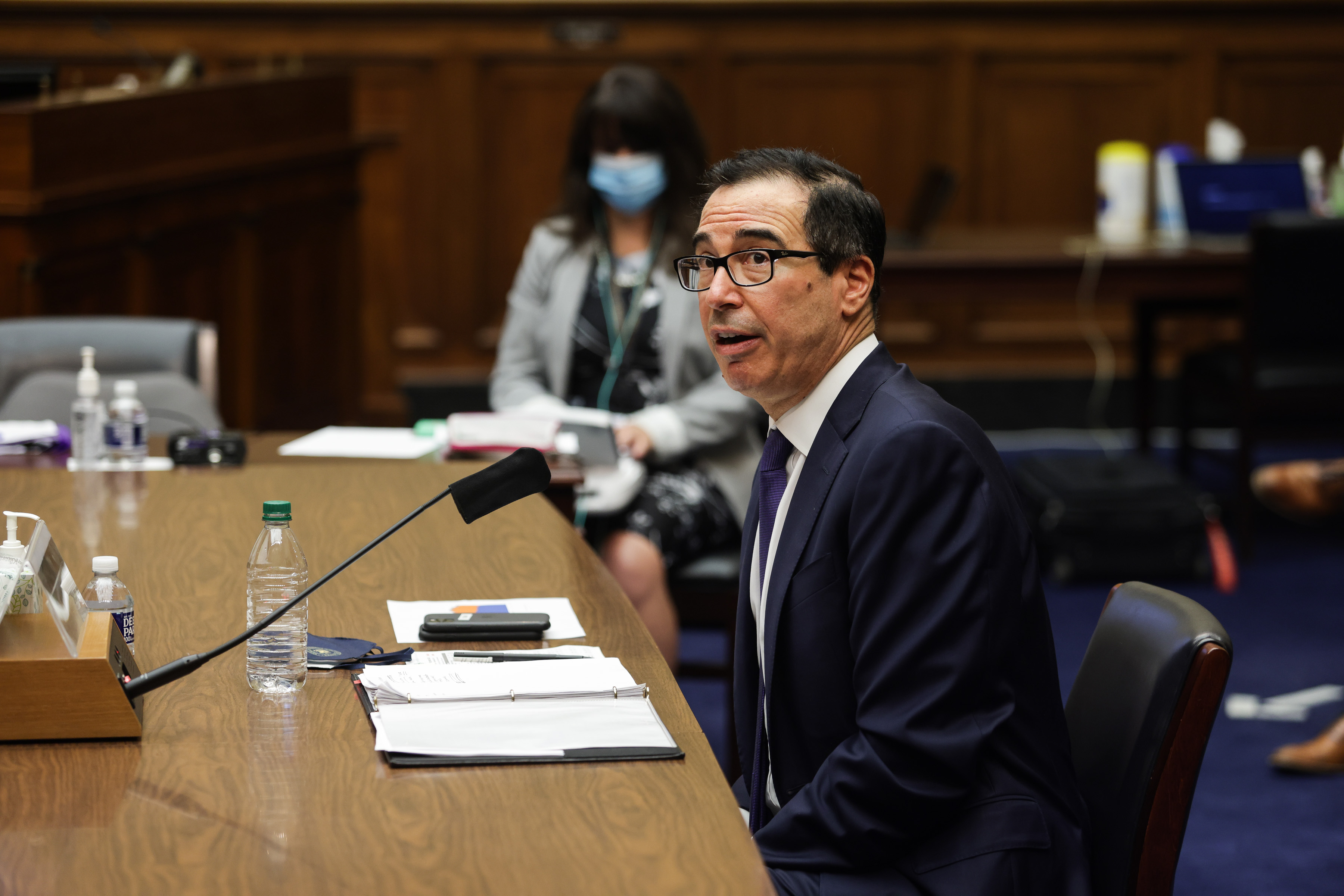 The president’s memorandum has also slowed down the negotiations, according to Andrew Stettner, an unemployment insurance expert and senior fellow at the Century Foundation, a think tank. That gave the GOP cover to leave for recess without coming to an agreement.

“It was very damaging to the negotiations in Congress,” he told Yahoo Money. “It was clearly a half measure, it did allow them to say they did something. They were able to leave town and stop negotiating, for now, a month.”

‘An act of Congress would fix everything immediately’

As unemployed workers wait to see what further aid — if any — they might receive under a new relief package, they are left with the limited assistance from Trump’s memorandum for now.

The handful of states that have started distributing extra benefits are about to exhaust or have already exhausted the initial funding they got. Under FEMA guidelines, approved states received enough money to give recipients “an initial obligation of three weeks of needed funding.” Any extra after that is decided on a week-by-week basis until the funds deplete.

Another issue with the FEMA funds is that they aren’t just for funding the unemployment benefits; they also fund disaster relief, meaning they could run out sooner than expected.

“Now we, unfortunately, don’t have unlimited amounts of money that we can do that,” Mnuchin said on Tuesday, “but the president wanted to move forward.”

Under the LWA program, states can choose to pay an extra $100 on top of the $300 in extra benefits from the federal government, making the distribution of benefits unequal throughout the country. South Dakota declined the extra federal $300 benefit altogether.

These holes make it necessary for Congress to do something beyond the president’s actions, experts said.

“An act of Congress would fix everything immediately,” Evermore said. “And it would equalize everything, almost immediately.”

Here at WalletPop, we have been following the ridiculous list of stimulus projects pitched to state governments. We had hoped that only the truly necessary and virtuous projects would get through.

Alas, government spending doesn’t always work that way, and we’ve put together a list of funded projects that range from the senseless to the silly. See if you agree.

You would be hard-pressed to miss the road projects in New York State funded by the American Recovery and Reinvestment Act (ARRA). At least, we hope so, since the signs alone have set the state back $2,000 apiece, or a total of $1 million according to ABC news. New Jersey has only just begun spending the $270 million it received from the stimulus package for projects. One of its first purchases: $12,000 for ARRA signs.

Despite the “strong recommendation” from the Federal Highway Administration that such signs be posted, a few states have demonstrated better judgment; Virginia, Florida and Texas are foregoing ARRA signs and putting that money to work building a better state. If they really wanted to properly credit the funding, perhaps the signs should read something like “Funded by loans from the nation of China.”

Next: The Turtle Tunnel

Listed as one of the most wasteful stimulus spends is Florida’s plan to build a $3.4 million “turtle tunnel”, a four-foot-high, mile-long retaining wall and culvert system along U.S. 27. A thousand to 2,000 turtles are killed there each year while trying to cross the road. Projected over a 20-year span, each turtle saved would come at a cost of $85 to $170.

According to Tallahassee.com, the tunnel will also provide safe passage for 62 species of mammals, amphibians, and other reptiles. When U.S. 27 was rebuilt in 1966, the bridge between Lake Jackson and Little Lake Jackson was replaced with an at-grade four lane, cutting off the customary commute route for the creatures living around the lakes. Earlier this decade, the state built an eco-passage serving the Paynes Prairie area in Alachua County, at a cost of $3.8 million.

Next: A Border Crossing for Nobody

A border crossing in Whitetail, Montana that averages fewer than two passenger cars a day and two to three trucks a month is slated to get $15 million in stimulus funds for upgrades. Yet this crossing isn’t the only alternative for travel back and forth to Canada in this area; another crossing is just 10 miles west, yet another 21 miles east. Senator Jon Tester of Montana has been outspoken about the threat of terrorists entering the country through his state. Seems to me fewer crossing locations would be a good way to reduce that risk.

Next: The Gift of Debt

The city of Perkins, Okla. accepted $1.5 million of stimulus money toward the $5.26 million price tag for its waste water treatment plant. Little did town officials realize that the additional restrictions that came with the federal money would balloon the cost of the project to $7.2 million. A little math shows that the $1.5 million of stimulus money cost the town $1.94 million. One more such gift and the town might have to declare bankruptcy.

Next: An Airport for Big John

The small airport near Johnstown, Pa. serves only three commercial flights with 20 passengers a day, all shuttling between there and Washington D.C.’s Dulles Airport. Why would the airport be in line for nearly $200 million of stimulus funds? Perhaps the full name of the airport will give a clue: the John Murtha Johnstown-Cambria County Airport.

John Murtha, as you know, is a U.S. Representative from Pennsylvania. Having served since 1974, he has a great deal of power, including chairmanship of the Defense Appropriations Subcommittee. He also has a reputation for swapping earmarks for votes on House legislation. No wonder he has his own airport.

Next: Stimulus Checks to the Non-Living

Few people alive failed to enjoy their recent stimulus check, money they could use however they wished. I spent mine on a Kindle. Unfortunately, as many as 10,000 dead people also were sent the $250 checks, and not one of them has expressed any appreciation at all. Social Security states that of the 52 million checks sent, 8,000-10,000 went to the mortality-challenged. I wonder how many ended up in the dead letter office?

This one may have a happy ending. Originally, the town of Union, N.Y. was surprised to learn it had been awarded $580,000 to help deal with its homeless problem. The problem? It has virtually no homeless. Town officials proposed spending the money instead to help the town’s senior citizens upgrade or replace their furnaces. The feds, in their wisdom, apparently don’t think that’s a worthy use, and will likely withdraw the money.

The lesson? When the government is handing out money, be creative. Perhaps the town could have convinced their elderly to abandon their homes and move into the street. Those people would then be homeless. The stimulus money could then have been spent installing new furnaces in their old homes so they could serve as homeless shelters for these people, each back in his own home.

Next: $1.5 million on Suicide Prevention Fence

Akron, Ohio’s All-America Bridge, aka the Suicide Bridge, has been the site of 28 suicides in the past 12 years. The long four-lane bridge crosses the Little Cuyahoga River Valley. At it highest, it runs 150 feet above the riverbed, as well as the homes and roads within the valley. Therefore, unlike many famous leap sites, those who dive from this bridge don’t land on rock or water; they land on the backyards, patios and playgrounds of a new, upscale housing development.

Among suicide bridges, the Golden Gate Bridge in San Francisco is far and away the most popular; over 1,200 people have dived from it. Yet no suicide fence has been erected, perhaps because victims end up in the ocean rather than little Suzy’s swing set. For those determined to die by jumping, there are many other bridges in the Akron area that would serve the purpose as well. The I-271 bridge over the Cuyahoga River is easily twice the height of the All-America Bridge.

Microsoft, seemingly the only company in America who the government has not yet bailed out, has two campuses at its world headquarters in Redmond, Wash. The two are close, but separated by Highway 520, causing a great deal of congestion. The solution? A tree-lined 480-foot bridge over the highway to connect the two campuses. The cost? $35-40 million. Microsoft’s share? $17.5 million. Stimulus funding? $11 million. I have to wonder who has more money; the federal government or Microsoft? I’ll bet they don’t name the connector the American Public Bridge.

Next: $3 million for a New Water Facility; Population 82

The town of Tennant, Ca. is not far from Mt. Shasta near the Oregon border. It has a population of 82. Apparently a very thirsty 82, if one is to judge by the $3,000,000 allocated from ARRA funds by the California Department of Public Health for a district water system upgrade. The money will pay for a new well, storage tank and pump station — at $35,585.54 a head.

Should we spend this much to bring the mountain to Mohammad? I wonder how much it would have cost to convince the residents to move to Macdoel, only 20 miles away? Perhaps they’d balk at moving to the big city, though. Macdoel’s population is a whopping 140.

Next: Standing Firm With the Firm

Finally, we have Colorado Governor Bill Ritter. He awarded $40,000 to the law firm of Hogan & Hartson, without taking competing bids. The Governor claims he was in urgent need of advice about how to handle the stimulus funds. Coincidently(!), before becoming Governor, Ritter worked in the Denver office of … Hogan & Hartson. I suspect I know where they suggested he spend a hefty portion of the dough.

If the stimulus spending is going to help our economy, we bet these retailers hope it happens quick. We take a look at struggling retailers that are closing some — or all — of its doors.