They knead some help! Amateur chefs share their Easter baking disasters – including a ‘shriveled’ cake and a batch of VERY questionable bunny biscuits

A hilarious Twitter thread has revealed just how many users failed to make the perfect bake this Easter.

While people on lockdown across the world have started to keep themselves busy by following various Mary Berry recipes, we’ve quickly realised that it’s simply not as easy as it looks.

‘If I had feral goats living in my backyard, I would hesitate to feed it to them. I will not be taking any questions at this time. Thank you for respecting my privacy.’

Her tweet racked up 23,000, likes and comments, with other users streaming to the thread to share their distastrous cakes, breads and biscuit fails. 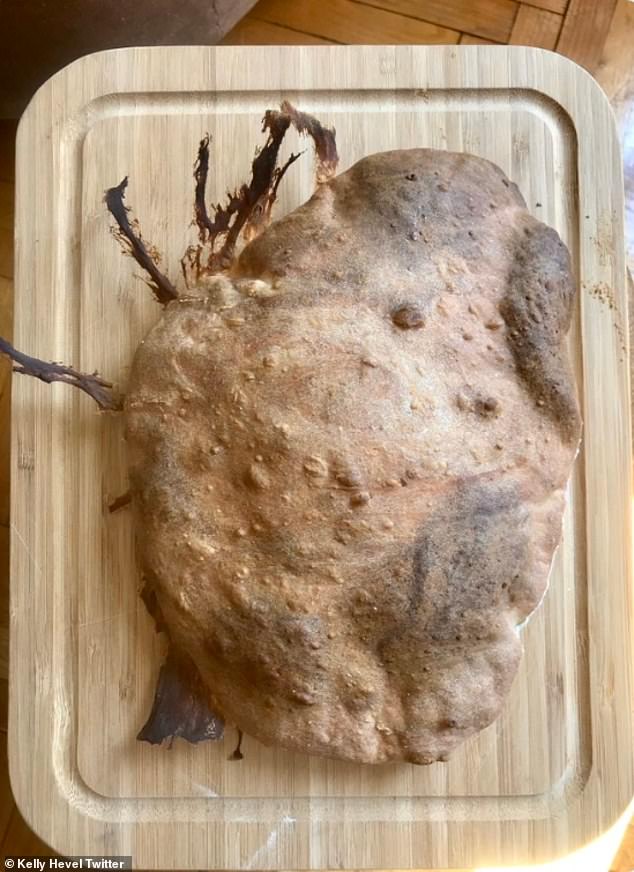 Kelly Hevel, from Turkey, shared a picture of what looked like a roast chicken, writing: ‘Hello. You may win the most-failed banana bread but I am champion of most-failed normal bread’ 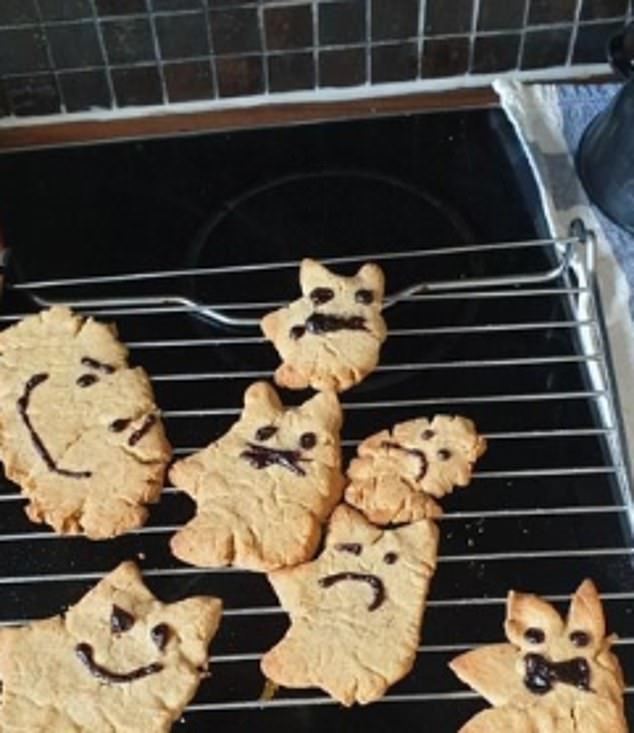 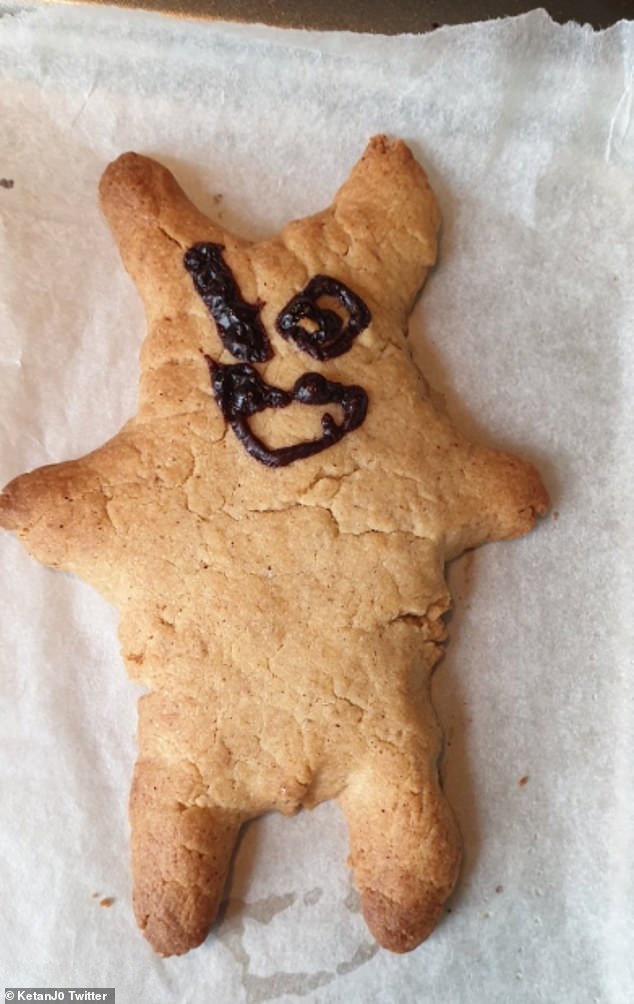 Meanwhile Ketan Joshi, from Oslo, Norway, posted a snap of some rather ominous looking cookies, asking: ‘As failed as my bunnies?’ 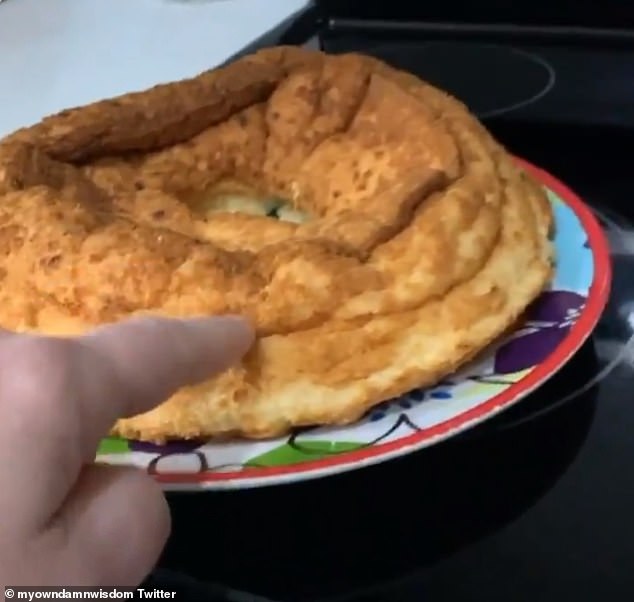 And Donna Peterson, from Wisconsin, shared a picture of a shriveled creation, writing: ‘My Easter cake fail’ 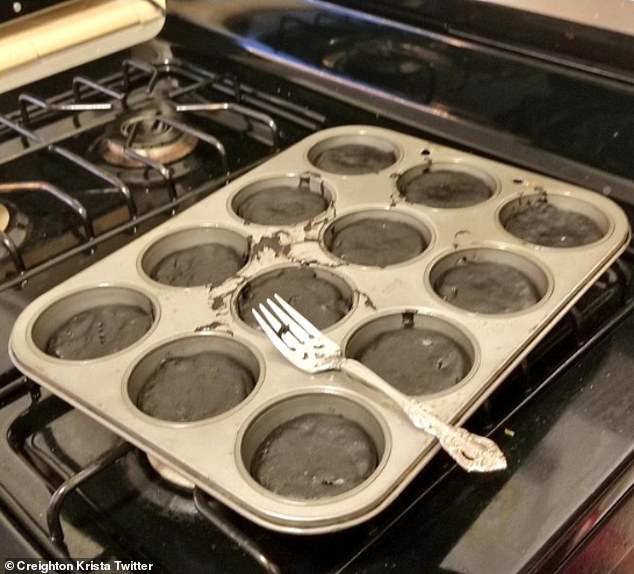 Elsewhere Krista Creighton, from LA, wrote: ‘I see your failed banana bread and will raise you…failed banana quarantine muffins! Yes, they are black as tar. No, they aren’t burnt. An unfortunate ingredient sub created a unique chemical reaction which added to the aesthetic appeal.’ 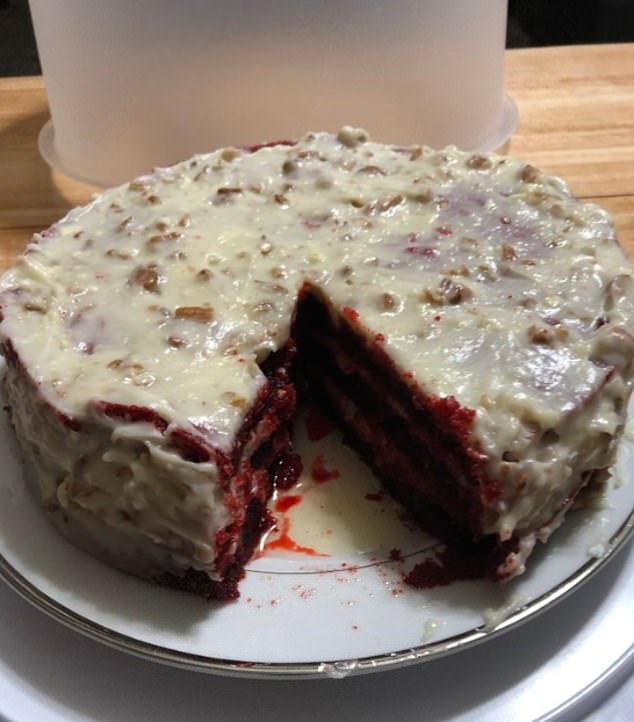 And one Twitter user from Georgia posted a picture of a rather runny red velvet cake, writing: ‘You should see the saddest red velvet cake there ever was!’ 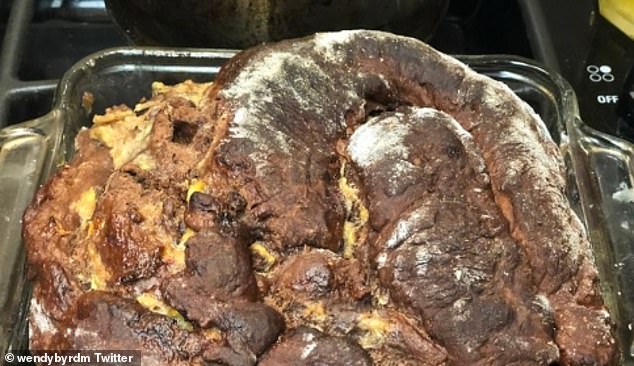 And American Twitter user Amanda posted a picture of an unusual creation, writing: This was supposed to be a nice, neat, braided circle of chocolate, caramel, and banana filled chocolate yeast bread, but the strands all burst and it ended up looking like a pan of Sasquatch feces. Tasted ok, though 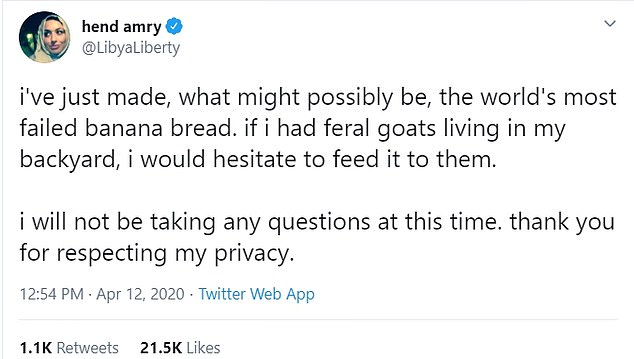 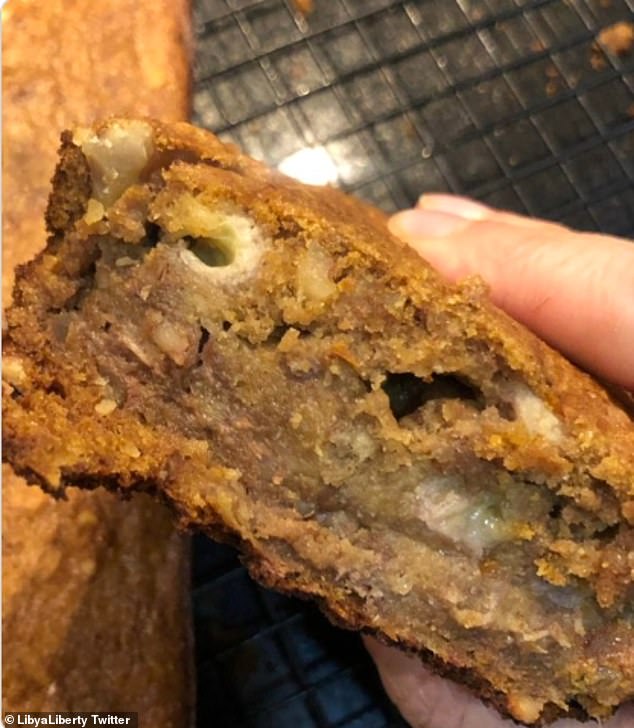 Twitter user Hend Amry, from Libya, took to Twitter to share a picture of her unusual banana bake writing: ‘I’ve just made, what might possibly be, the world’s most failed banana bread. ‘If I had feral goats living in my backyard, I would hesitate to feed it to them. I will not be taking any questions at this time. Thank you for respecting my privacy.’ 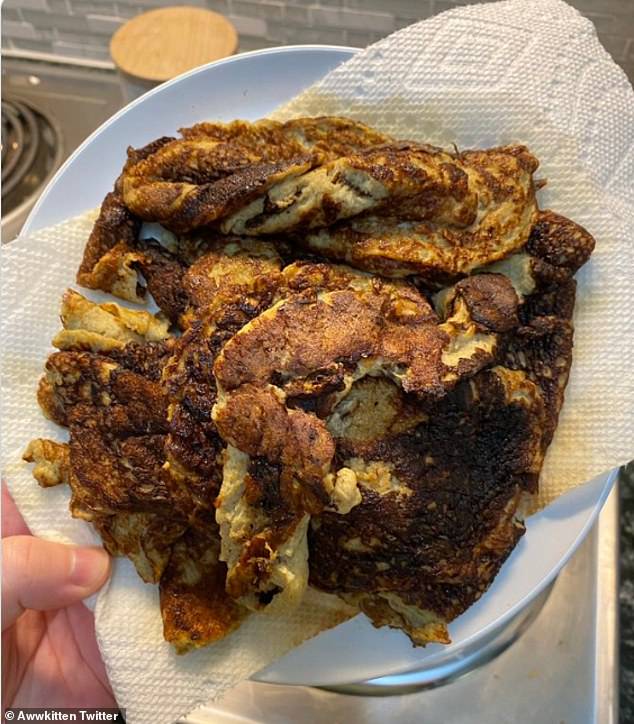 Kat, from Texas, shared her own snap, and admitted: ‘My banana/ egg pancakes weren’t right’ 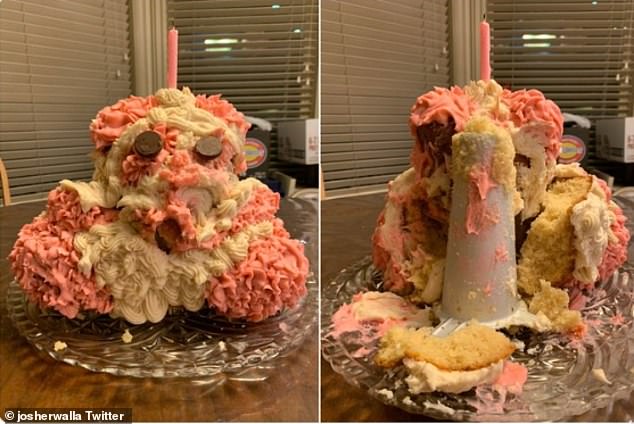 And Josher Waller, from Utah, posted a picure of a lively bake, writing: ‘Here’s #MyShame — luckily my niece is one and couldn’t tell the difference. Recurring nightmares are not confirmed, but expected.’ 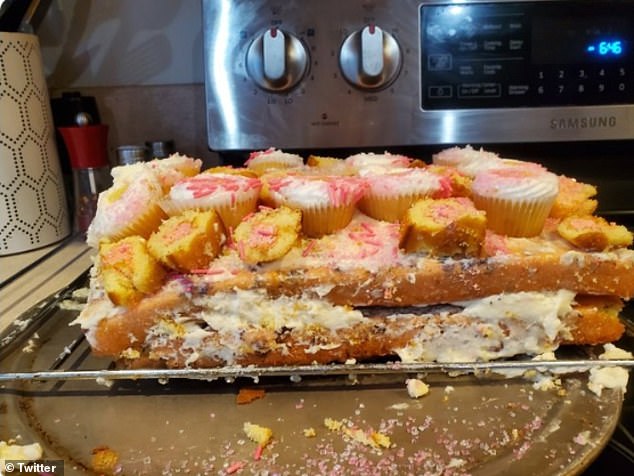 A mother from Washington added a snap of a bake in a state of disarray, writing: ‘My daughter made a cake last night. Mmmm’ 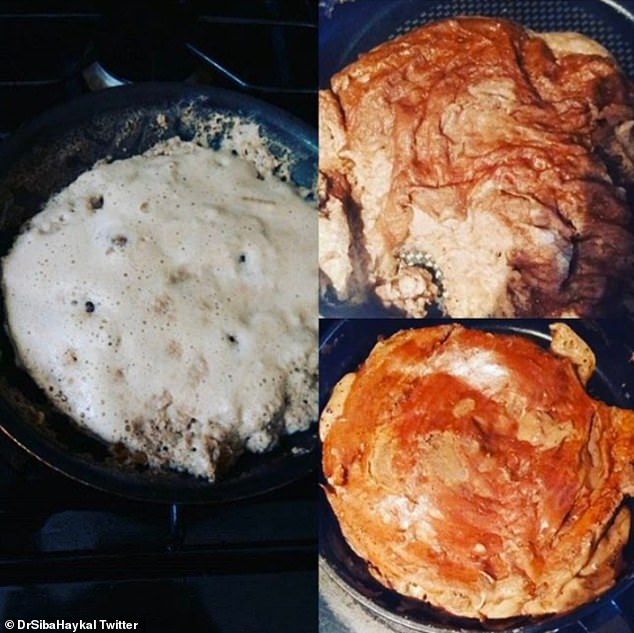 Siba Haykal, from Toronto, was also not successful in her Easter treat, writing:  ‘My protein pancakes before the fire alarm went off!’ 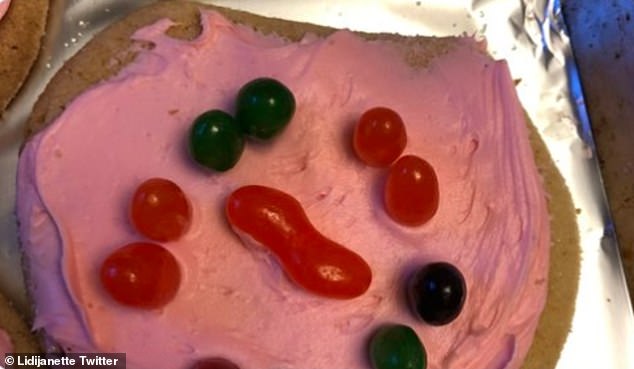 Lidija, from Indianapolism wrote: ‘My mom had us decorate easter cookies last night and was NOT impressed when my cookie that started out as stonehenge turned into a sacrificial circle upon finding the mutated jellybean’ 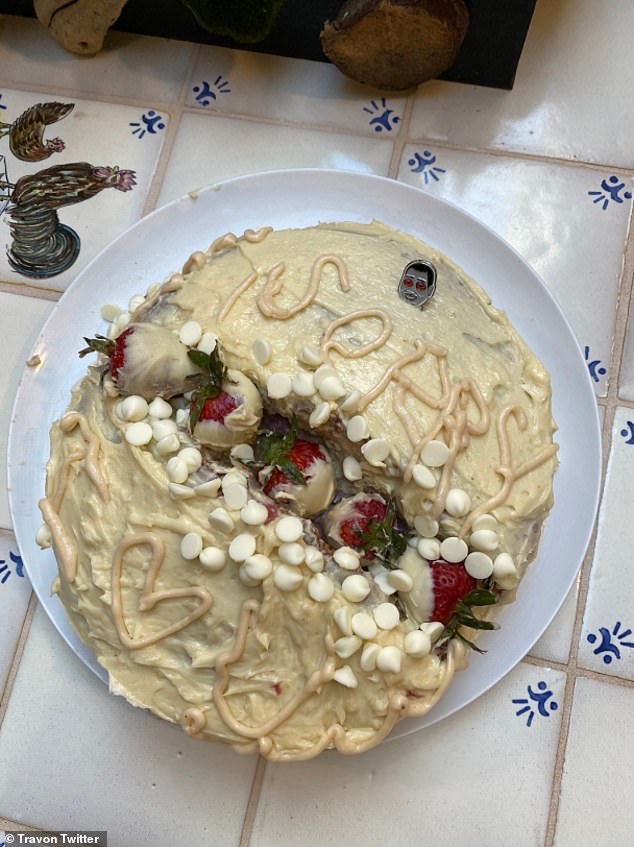 Travon, from Compton, posted a picture of an unsusual cake creation, writing: ‘The cake my girlfriend made me for my quarantine birthday’