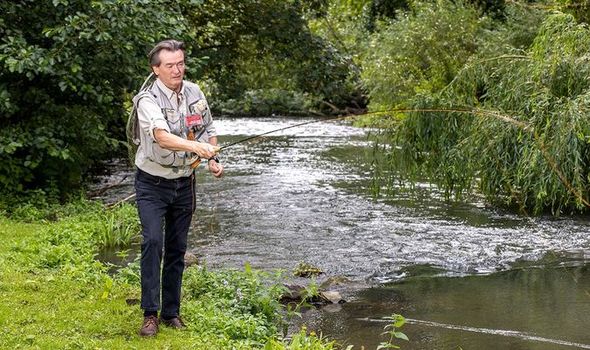 In an open letter to the Prime Minister, former Undertones singer Feargal Sharkey told him to “clean up his own backyard” before lecturing countries about their environmental record.

The keen angler slammed a system that has allowed our rivers and seas to become little better than open sewers.

And he dismissed an amendment to the Environment Bill as “not even worthy of the term sticking plaster”.

Today the Daily Express joins Mr Sharkey in calling on the Government to clean up our waterways. We want to see polluters punished with fines so large that they no longer shrug them off.

Rivers are being polluted by raw sewage, farmland manure and chemicals while huge volumes of water are taken from them every day.

The most recent figures pro- vided by the Environment Agency (EA) reveal that not one river, lake or stream in England passed chemical pollution tests.

Ali Morse, head of Blueprint for Water, said: “Our rivers are flatlining at best.”

Other EA data shows that last year sewage was pumped or spilled into English rivers 403,171 times – up 38 per cent on 2019. This equated to 3.1 million hours of raw sewage being pumped into rivers – including many favoured by wild swimmers.

The main problem is storm overflows, which are designed to discharge diluted sewage into rivers or the sea during heavy rainfall to stop it backing up in homes or on streets.

The Victorian infrastructure has failed to keep up with the demands of a growing population and extreme weather events caused by climate change.

What is happening where you live? Find out by adding your postcode or visit InYourArea

There are 15,000 storm overflows in England and, despite a big increase in monitoring, about 3,000 are still not routinely checked. Compounding the problem is that the EA budget for tackling agricultural, waste crime and incident responses has been slashed from £117million in 2010-11 to £40million last year.

A Freedom of Information response to Charles Watson, the head of campaign group River Action, revealed that there is just over half an official in each of the 14 EA areas to monitor farm pollution. As a result, it says each farm in England can now expect just one inspection every 263 years.

The scale of the problem was revealed last month when Southern Water admitted releasing raw sewage from more than half its outlets on the South Coast during heavy rain.

A spokesman for the Department for Environment, Food and Rural Affairs said: “We’ve been clear that polluters must pay for the damage they do to the environment – which is why earlier this year Southern Water was handed a recordbreaking £90million fine. The Environment Bill will be further strengthened with an amendment that will see a duty enshrined in law to ensure water companies secure a progressive reduction in the adverse impacts of discharges from overflows.”

But Mr Sharkey said: “This is still a form of self-regulation by the very people that caused the problem in the first place.”

A spokesman for Water UK, which represents the industry, said: “Water companies are passionate about their role as custodians of the environment and are investing £5billion.”