A restaurant recruiter who shamed an unsuccessful head chef job applicant online after he replied ‘f*** you’ to her email was stunned when her post on LinkedIn backfired and people blamed her for sending a ‘bragging’ rejection letter.

Recruitment and development manager Claudia Narder, 35, from London, claims she rejected the man for the role at the London pub and hotel chain Cubitt House last month because his CV did not match the required skills.

Within 15 minutes of her sending out the rejection email, the applicant responded ”f*** you’ and she shared the unusual response on her LinkedIn page.

She posted the screenshot to show other applicants how rude the response was, while preaching about the importance of ‘giving feedback’ unsuccessful candidates. 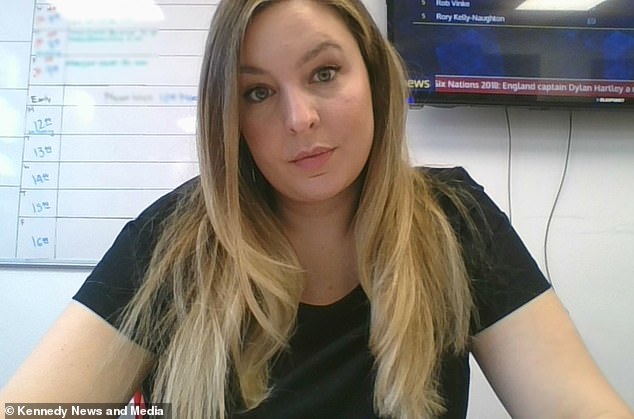 Claudia Narder (pictured), 35, posted the unexpected reply she received from an unsuccessful applicant on LinkedIn 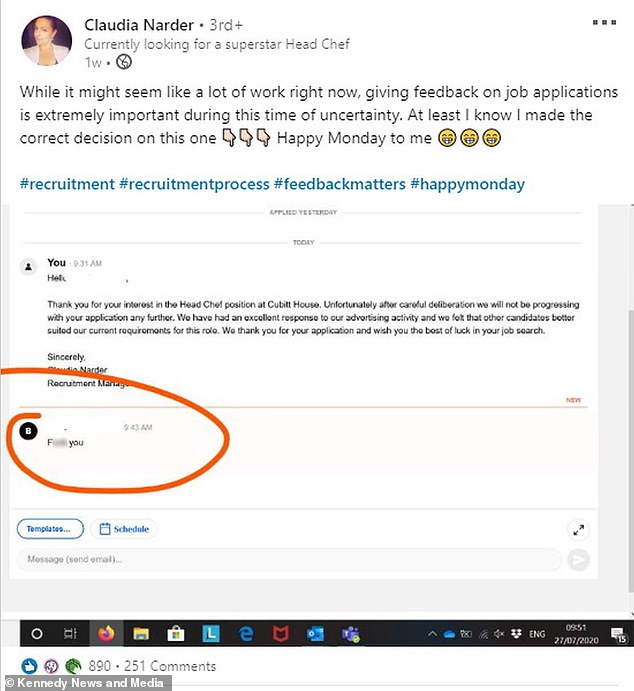 However, Claudia was ‘disturbed’ when people began commenting on her post siding with the foul-mouthed reject and slammed her ‘generic and annoying template’ knock back email.

Many people told the recruiter that she deserved the rude response as she had bragged about the ‘excellent response to advertising activity’ and not actually given any feedback at all.

In her rejection email, she penned: ‘Thank you for your interest in the Head Chef position at Cubitt House.

‘Unfortunately after careful deliberation we will not be progressing with your application any further.

‘We have had an excellent response to our advertising activity and we felt that other candidates better suited our current requirements for this role.

‘We thank you for your application and wish you best of luck in your job search.’

Claudia claims she initially laughed at the message, speculating with her manager that it might have been an auto-correct mistake or that the candidate may have had a bad day.

However, she shared the exchange online with the status: ‘While it might seem like a lot of work right now, giving feedback on job applications is extremely important during this time of uncertainty.

‘At least I know I made the correct decision on this one. Happy Monday to me. #recruitment #recruitmentprocess #feedbackmatters.’ 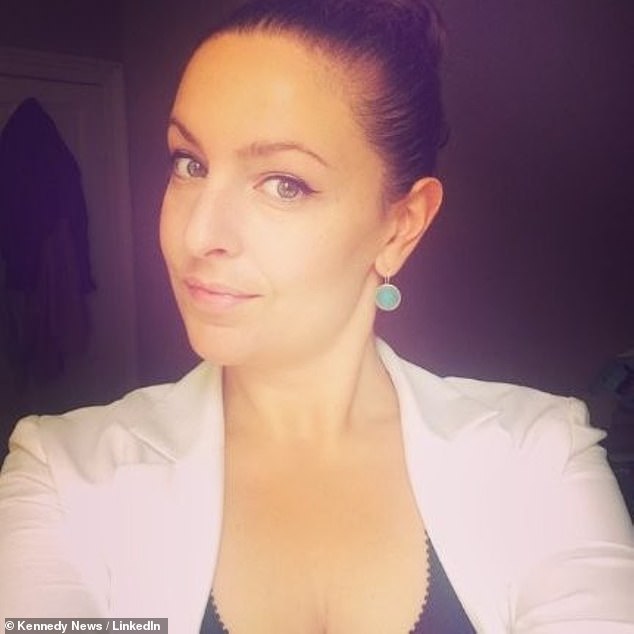 Claudia (pictured) posted the unusual response on her LinkedIn page and hundreds of people commented, some supporting her and others siding with the rejected application 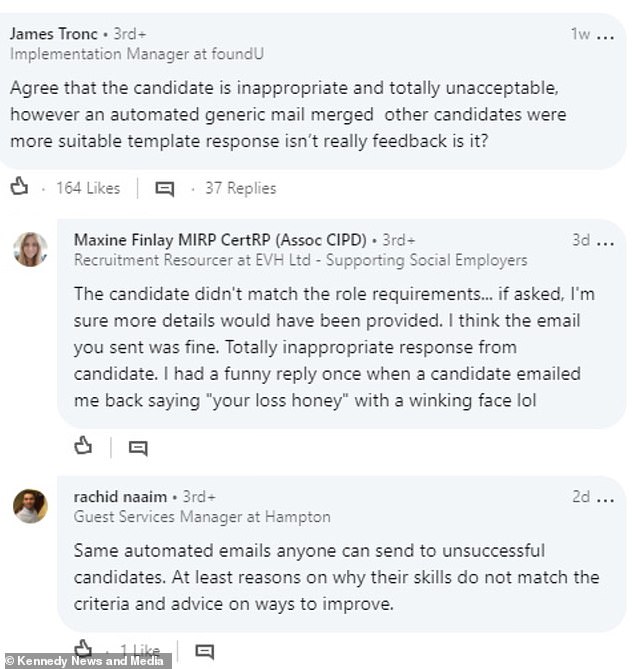 The recruiter claims she was left shaken at the reaction to her post and began doubting her ability to do her job.

‘What shocked me the most was not the candidate’s reply, as we get all sorts of replies, but it was the feedback that came in from people on my post,’ she said.

‘They were condoning it and saying it was correct for the candidate to use the F word and using abusive language that you wouldn’t use anywhere else. I understand my response was pretty generic but it was nice and polite.

‘They were comparing it to the response saying, ‘you get what you give’. I’m sorry but I can’t agree with that. That’s not fair.

‘What sort of example does it give to candidates and future generations when applying for jobs themselves? I’m still quite shocked from the comments I got.

‘I’ve never had a response like this. You will have people coming back to you saying ‘actually I think I am suitable’ and being a bit more abrupt but never on this level. 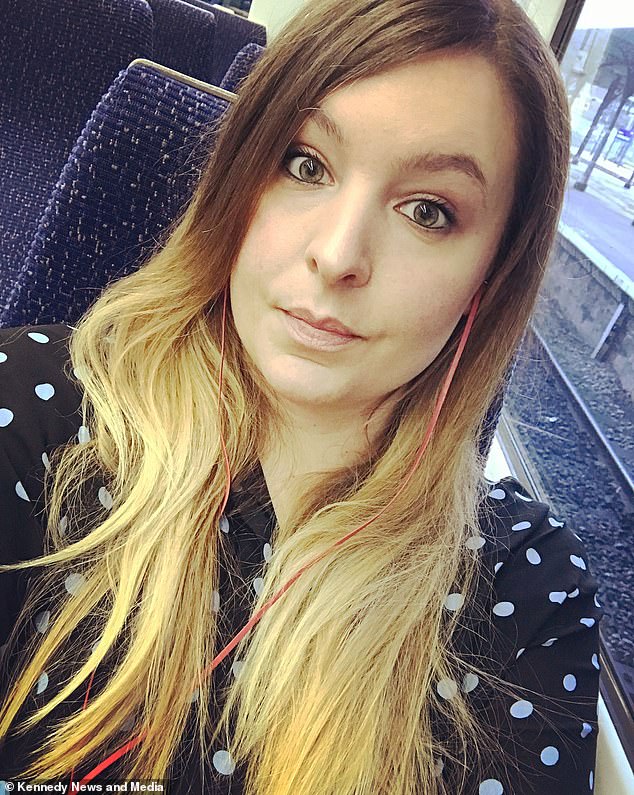 ‘That was the reason why I put it online – not to have a laugh but to share the experience and see if it had happened to anyone else.

‘But then I questioned myself. Am I doing the right thing? Am I good at my job? Maybe it’s something I need to change. I felt quite intimidated, actually.

‘It shows probably there was a miscommunication in the way we communicated with him, so I felt really bad.

‘I don’t want to sound like a victim but something must have gone wrong in the process. I felt a little bit bad and started to question myself, even though you can’t justify the response.

‘I’ve sent the same response to other people before and they’ve said, ‘thank you very much, thank you for getting back to me’.

‘I believe this was a one-off. He might have had rejections from hundreds of other jobs on the same day and that’s completely understandable.

‘He is not to blame fully. The people who were condoning his behaviour – they need to think about what they’re saying.’

‘Bit of a humble brag as well with, ‘we had excellent response to our advertising activity’.’

Claudia replied: ‘I am sorry but my email didn’t come through as rude or disrespectful.’ 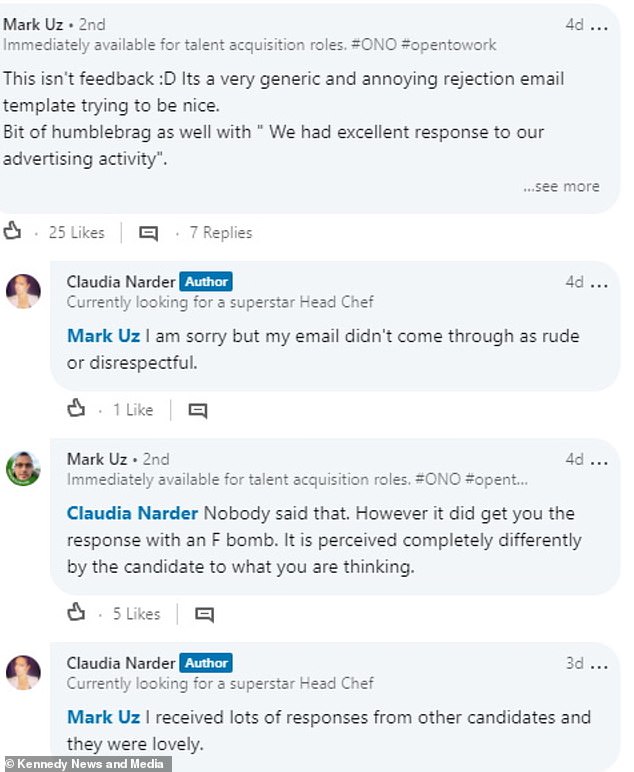 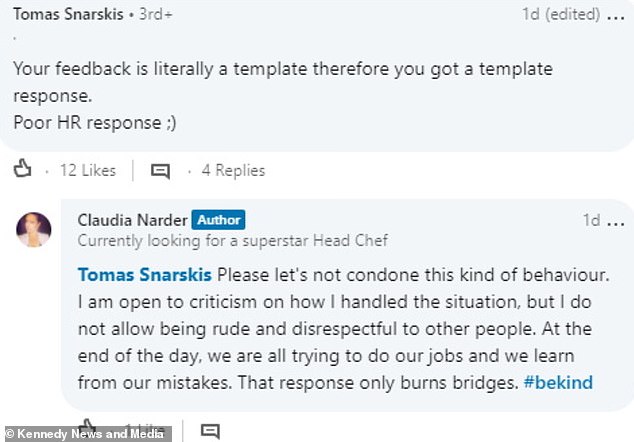 Mark said: ‘Nobody said that. However it did get you the response with an F bomb. It is perceived completely differently by the candidate to what you were thinking.’

Fellow user Kathleen Smacchi said: ‘I would feel quite irritated with that rejected, although I wouldn’t swear.

‘We don’t know how much the guy needs to work though, his response might be driven by desperation.’

Charmaine Waters said: ‘All what you’re saying could be fine to you, however, the rejection letter seemed awfully drafted, in times of such crises worldwide, your admin could have been a bit more subtle and sympathetic.

‘Also I don’t see a need to be so proud, just being honest. You get what you give. I’m glad he doesn’t get to work for you either.’

James Tronc said: ‘Agree that the candidate is inappropriate and totally unacceptable, however an automated generic mail merged ‘other candidates were more suitable’ template response isn’t really feedback is it?’

Tomas Snarskis said: ‘Your feedback is literally a template therefore you got a template response. Poor HR response.’ 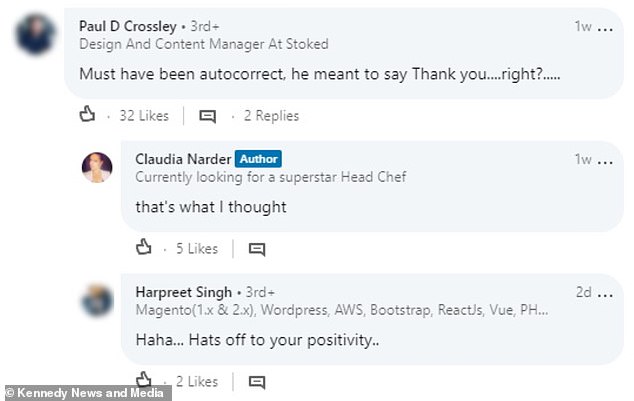 Claudia’s post attracted a lot of attention and people quickly shared their opinions on the matter, with some criticising her email (pictured)

However, others took a more optimistic approach, as Paul D Crossley said: ‘Must have been autocorrect, he meant to say thank you….right?’

Claudia is still accepting applications for the head chef role, with several hopefuls progressing to interview.

But she has vowed to take on board the feedback and adjust her response by inviting rejected candidates to request specific feedback if they would like it.

‘I do understand, and I took on board some feedback,’ she explained. ‘There was some constructive feedback.

‘I’ve changed the way I do things now. It is a little bit silly to think I can send a personalised response to everybody – it is a templated response.

‘But I do now say, ‘due to the high volume of applications I have received, I’m not able at this time to give you personalised feedback. But if you wish to have that, please let me know’.

‘I have had some candidates getting back to me saying, ‘actually yes, can you be a little bit more specific’ and then we’ve started a conversation.

‘This has helped me to do my job better, so it has been positive.’