Up to 15 shows to start within weeks as film, TV production restarts

Film and television production is set to rush back in Victoria, nine months after it came to a screeching halt due to the pandemic.

The easing of COVID-19 restrictions announced on Sunday included the edict that "production and pre-production of Film Victoria-funded screen projects and closed-set feature film, television and documentaries that are filmed in Government-owned facilities" would be permitted from Monday. It came a week after the government gave the greenlight for pre-production on such projects. 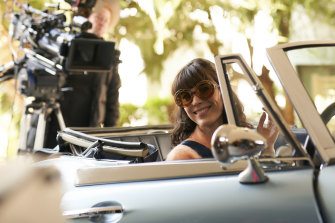 Film Victoria chief executive Caroline Pitcher said as a result of these changes the state is set to enjoy a "mini recovery boom", with $184 million of activity due to start within the next two months. "Beginning in the next couple of weeks we hope to see up to 15 go into production — television, documentary and feature film — so the majority will be able to wrap before Christmas," Pitcher said. "It's ambitious, but we feel confident we have the right plans to get production happening safely."

The film and television production sector has been amongst the hardest-hit by COVID-19, with many workers ineligible for JobKeeper because of the gig nature of their employment. The re-emergence of the industry has been plotted almost since the first shutdown in March, with Victoria initially hoping to be among the action as Hollywood productions looked to relocate to the relative safety of Australia.

But while other states — and especially northern New South Wales and Queensland — have picked up some of that work, Victoria's ability to capitalise was massively hampered by the second wave of infections.

Now, with a mix of local and international productions set to start or resume, Pitcher said there was an opportunity to use the short-term recovery as the basis of something more sustainable.

"I feel like we have some real potential to lift the value and the volume of production going forward," she said. "There's a lot of work over the next six months, but we've got to come up with a strategy to ensure Victoria is still able to develop our own intellectual property, make our own productions, as well as attracting a healthy share of international productions."

A small number of shows that had already started filming — dramas Neighbours, Wentworth and Five Bedrooms and reality programs The Block, Millionaire Hotseat and The Masked Singer — were allowed to continue during the shutdown. But most were put on hold and Hotseat relocated to Queensland in September to finish its season.

International production Clickbait, for Netflix, was about four weeks from wrapping its Docklands Studios and location shoot when it was shutdown in March, initially for a two-week "break". It has been in limbo ever since, but is expected to resume production next month.

The Apple TV+ series Shantaram also went into "hiatus", initially due to script issues rather than COVID-19, but its resumption has been held up by the shutdown. It is expected to restart early next year. 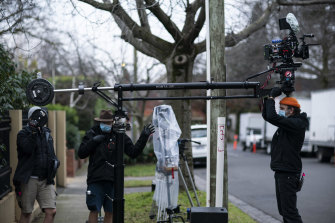 Both shows have international cast who will, under current guidelines, need to quarantine interstate before being allowed into Victoria to finish production.

A slew of local drama series, which had previously been announced but had been unable to begin physical production, will kick off in the next few weeks. Among them are: a second season of Ms Fisher's Modern Murder Mysteries, set in the 1960s and starring Geraldine Hakewill as Phryne Fisher's niece, for Seven; New Gold Mountain, a four-part series for SBS about Chinese miners on the central Victorian goldfields in the 1850s; Kitty Flanagan's legal comedy Entitled for the ABC; and The Newsreader, a six-part drama also for the ABC.

"We're so thrilled to start production on The Newsreader, which we will be filming in and around Melbourne from next month," producer Joanna Werner said. "We pushed back the start of pre-production by a number weeks due to Stage 4 lockdown but we are up and running now with our COVID plan firmly in place. It's great to see so many fabulously creative people back at work."

All productions receiving Film Victoria and/or Screen Australia funding must have COVID Safe guidelines in place. While these vary from shoot to shoot, they typically include social distancing measures such as one person per four square metres, increased hygiene protocols, individually prepared and packaged meals, and single-touch props. Bubbles within productions — in which key cast and crew are isolated from the rest of the unit — are also increasingly likely to feature, as is frequent testing of main personnel.

"It's a very carefully considered and contained staged return to production," said Pitcher. "We were able to keep certain productions filming in stage 4, and we were able to sustain pre-production on projects during the shutdown, and now we're finally ready to get back into physical production."