Animal rights organisation PETA has been mercilessly mocked on social media, after it attacked a sharing video game for not being vegan friendly.

The US branch of the pressure group, which is based in Virginia, made a lengthy guide explaining which aspects of Nintendo’s Animal Crossing should be deemed unethical.

Since posting the feature on Twitter, more than 7,000 people have given their verdict on the suggestion that players shouldn’t be doing virtual activities, such as fishing and catching bugs.

Many have blasted the article as ‘ridiculous’, arguing that animals aren’t hurt from playing the game. 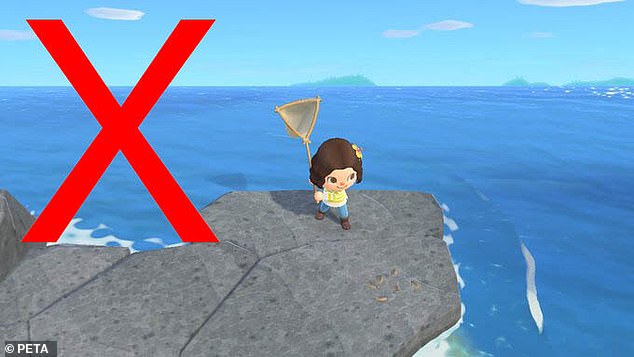 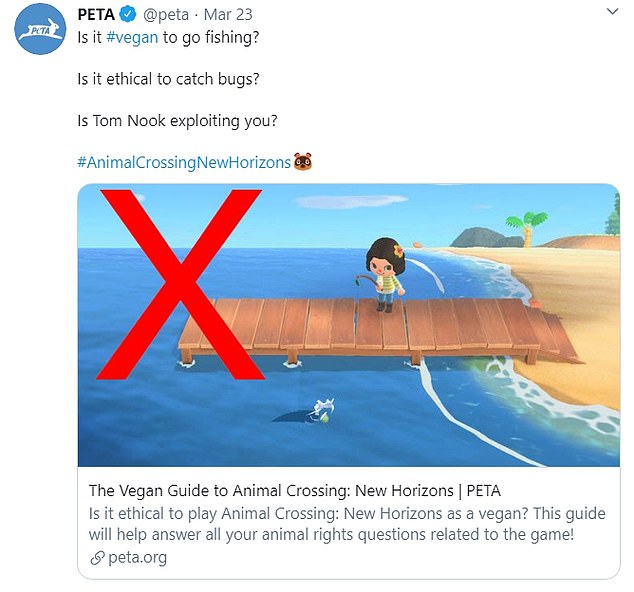 PETA said that the game should highlight how animals are exploited in the real world, as they argued it’s unethical to partake in virtual activities such as fishing and digging for clams

Other activities PETA advised against while playing Animal Crossing include digging for clams and picking up hermit crabs.

Summarizing its views, PETA wrote: ‘The premise of Animal Crossing: New Horizons should send the important message that other animals are individuals with whom we share the world—not objects for us to exploit. We are all animals—and we all deserve respect.’

In a stream of responses to the post, one person wrote: ‘It’s just a game? One where the animals aren’t even hurt? Why did you feel the need to make this?’

Another said: ‘I’ve been playing Animal Crossing since I was 5. I have been vegan for several years. Shut up. Please. Focus on real activism instead of a video game.’

‘Veganism is the reduction of animal exploitation from our lives and diets. Animal Crossing is a game. PETA please, you are making this so hard for activists.’

A stream of responses to the article blasted PETA, declaring that animals aren’t hurt from playing Animal Crossing

However, others supported PETA and said the game could teach children to disrespect animals.

‘Y’all are ignorant. I have no doubt they’re damn well aware it’s a video game, but when a child plays games like these, they translate those objectives into real life,’ one said.

Another said: ‘Before you c*** on PETA too hard for the Animal Crossing article, maybe read it? It’s kind of tongue-in-cheek and spends most of the article talking about real world things.

Others defended PETA, saying they’re highlighting exploitation in the real world and the article should be seen as tongue-in-cheek