Russia’s going to ‘keep pushing forward’ with invasion, will get ‘worse’: Richard Boucher

Volkswagen AG is the latest automaker to announce it will suspend vehicle exports to Russia until further notice in response to the country's invasion of Ukraine. In addition, the company is halting production at its facilities in Kaluga and Nizhny Novograd.

"The Volkswagen Group has received the news about the war in Ukraine with great dismay and shock. Volkswagen continues to hope for a cessation of hostilities and a return to diplomacy. We are convinced that a sustainable solution to the conflict can only be found on the basis of international law," the company said in a statement. "With the extensive interruption of business activities in Russia, the Executive Board is reviewing the consequences from the overall situation, during this period of great uncertainty and upheaval."

In January, Volkswagen delivered 38,900 vehicles to its customers in Central and Eastern Europe, which includes Russia. The figure is down about 22% from 2020, when it delivered 50,400 vehicles.

STELLANTIS IS DONATING $1.1 MILLION TO UKRAINIAN REFUGEES, BUT NOT SUSPENDING RUSSIAN OPERATIONS YET

Immediately after Russia's invasion of Ukraine started, Volkswagen formed a crisis management team to monitor impacts related to the conflict. The company previously told FOX Business that the initial hostilities aggravated the situation for its Ukraine-based suppliers, resulting in delivery bottlenecks. 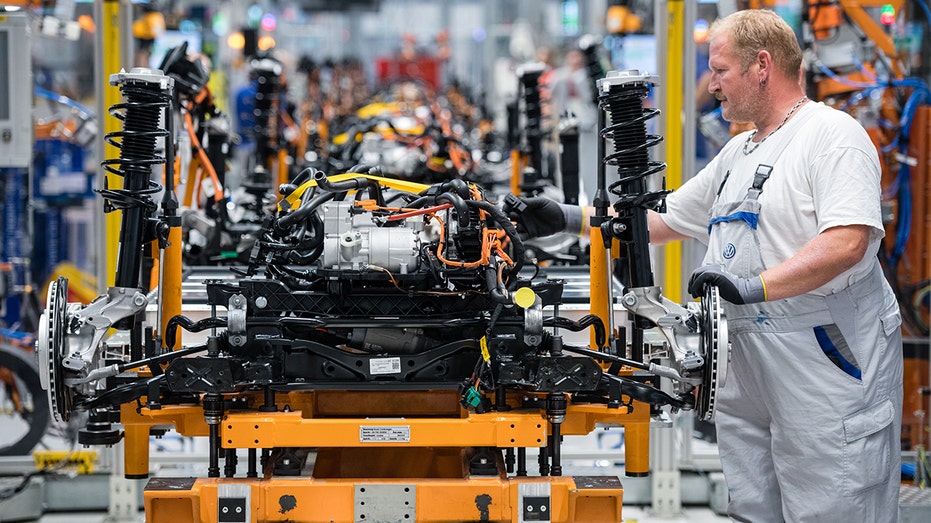 A worker assemble the powertrain with an electric motor and battery of a VW ID.3 electric cars at the Volkswagen factory on July 31, 2020 in Zwickau, Germany. Volkswagen has started taking orders for the car and is hoping the ID.3 will be an effectiv

Prior to its latest announcement, the company had already temporarily suspended electric vehicle production at its plants in Zwickau and Dresden, Germany. It also said it anticipated possible production restrictions at its Wolfsburg plant and production stops at its Volkswagen Commercial Vehicles plant in Hanover.

In addition to Volkswagen, both BMW and Mercedes-Benz announced they will suspend vehicle exports and production in Russia. Daimler Truck AG is also suspending all business activities in Russia until further notice.

Ford has also notified its joint venture partner Sollers that it will suspend its operations in the country and Volvo and General Motors have both suspended vehicle exports until further notice.