A Serbian volleyball player has apologized after she was caught on camera making a racist gesture toward her Thai opponents.

Sanja Djurdjevic pulled her eyelids apart to make a slant-eye gesture during the televised FIVB Volleyball Women’s Nationals League match against the Thai team in Italy on Tuesday night after a Thai player failed to win a point.

The moment prompted outrage online. The clip was shared alongside hashtags to stop Asian hate, a tagline born to address a steep rise in anti-Asian hate crimes and harassment tied to the coronavirus pandemic and racist rhetoric about its origins.

It’s not the first time the Serbian team has caused a furor over this gesture. In 2017, the team posed for a group shot pulling back their eyes to celebrate securing Serbia’s place in the 2018 FIVB Women’s World Championship, which would take place in Japan.

“I am aware of my mistake and I immediately after the match apologized to the whole Thailand team,” Djurdjevic said, according to Vice News and a screengrab shared by a Twitter user. “I only wanted to address my teammates with the message: ‘now, we will start playing defense like them’, I didn’t mean to disrespect anyone.”

“Of course, it was unfortunate and not so smart gesture from my side,” she continued, adding that she was sorry to people around the world “who are offended by this.”

“Big thanks to the Thailand team for understanding,” she concluded.

Pleumjit Thinkaow, the Thai volleyballer who was the reported target of the gesture, posted a forgiving message on Instagram alongside Djurdjevic’s post.

The Volleyball Federation of Serbia issued a strange apology statement, asking the public not to blow the incident out of proportion.

It said the federation was “deeply saddened” by the “unfortunate gesture.”

“We apologize sincerely to the Thailand team, people of Thailand and to all of you affected by this,” it said.

“But, please, don’t blow this out of proportion! Sanja is aware of her mistake and she immediately apologized to the whole Thailand team. She only wanted to show her teammates “let’s start playing defense like them now”, she didn’t mean any disrespect.” 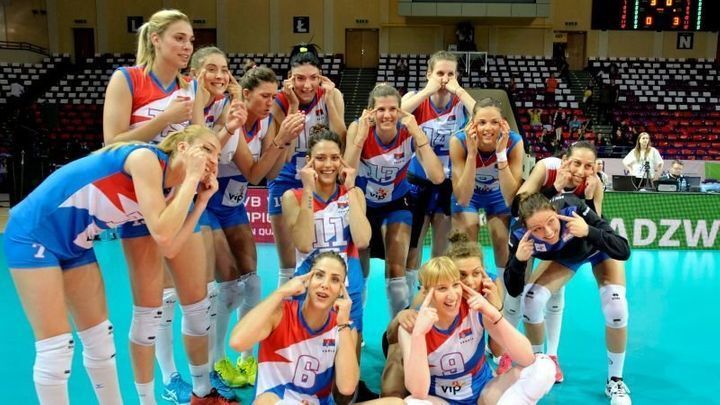 The apologies from Djurdjevic and Serbia’s volleyball federation did not satisfy critics. An online petition was established Thursday calling for the FIVB to formally discipline the player for failure to adhere to its ﻿code of ethics, which prohibits racial discrimination.

“FIVB already failed in 2017, when they not only did not discipline the Serbian Volleyball Team for the entire team posing with the slanted-eye gesture after a win, they used it on their website to announce the win (since replaced),” it said.

“Sports happens on a global stage with millions of people watching often viewing athletes as role models.  When athletes and teams violate the most basic ethics of respect, governing bodies must set the right example to protect the disrespected and marginalized to maintain their standards and integrity.”